From Sean Connery’s Rolex Submariner to Daniel Craig’s Omega Planet Ocean or Seamaster (aka the “Casino Royale” watches), the James Bond franchise enjoys a rich tradition of putting serious horology up on the big screen. Today, we give that tradition its due, by way of our complete list of all the 007 watches.

Expect to see a few choice names like Omega, Seiko, and Rolex pop-up time and again and that’s no accident. In fact, Omega has been an official franchise partner since 1995, occasionally releasing its own limited edition Bond watches for purchase. We actually covered one just a few weeks back.

Meanwhile, you might be wondering what kind of watch Daniel Craig will be wearing in the upcoming Bond film, better known as “No Time to Die.” We can’t tell you just yet, but odds are it will be an Omega Seamaster of some sort—call it a hunch.

What we can tell you with (near) certainty is the exact watch worn by James Bond in “Spectre” and “Dr. No” and every film in between. And while a number of these movies don’t necessarily hold up by today’s standards, each 007 watch still looks downright classic. Check out this complete list of the James Bond watches to see if you agree.

The connection between James Bond and Rolex dates all the way back to Ian Fleming’s original novel, “Casino Royale,” in which the famous spy rocks the equally famous brand. Fleming took direct cues from his own personal passions, as he was often seen with a Rolex Explorer Reference 1016 around his wrist.

According to legend, actor Sean Connery—who was the first to portray Bond—was also a devoted Rolex enthusiast. It’s actually been reported that the Rolex Submariner worn by Connery in the inaugural Bond film came straight out of his own collection. Affixed to a leather strap, it marked the stylish debut of what would eventually become an iconic relationship. 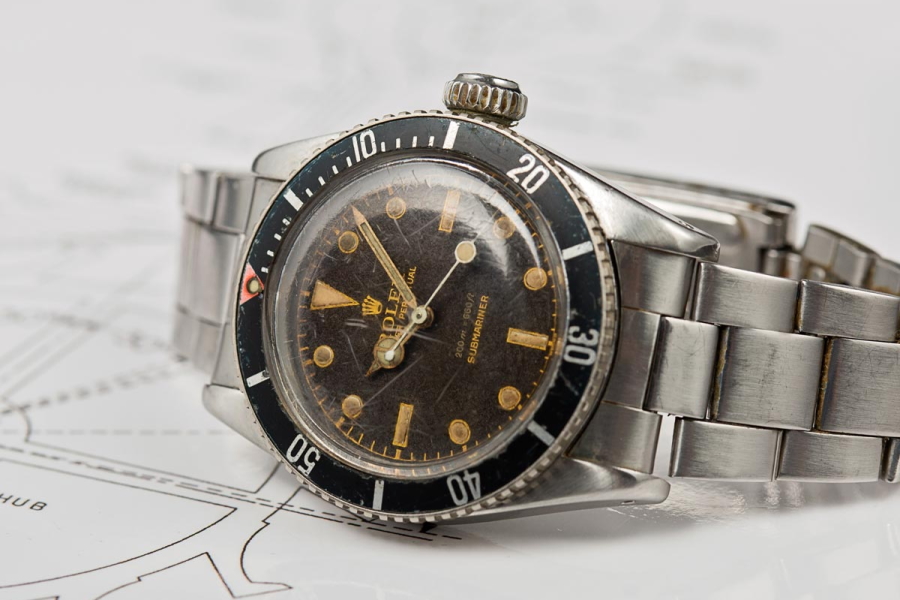 A new Bond film meant new enemies and new adventures, but for Sean Connery, it also meant the return of his premium Rolex Submariner. Since Q had yet to convert James Bond’s watches into clever weapons, this one showed just the time on its signature dial face. Eventually, watches would become an integral part of 007 lore and not just for stylish purposes. 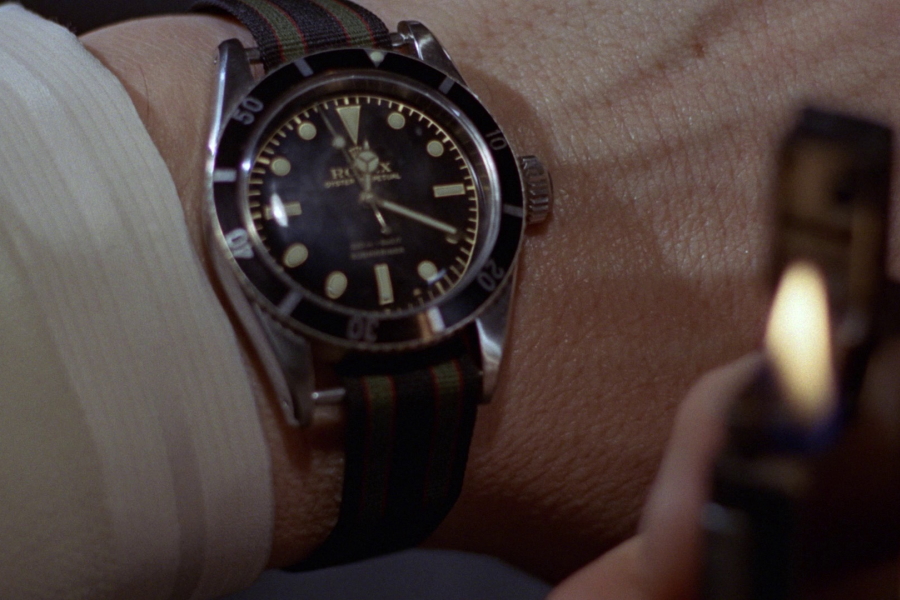 As the saying goes: if it ain’t broke, don’t fix it. By the third 007 film, the swanky spy wasn’t broke and neither was his trusty Rolex Submariner. When Bond rolls up his tuxedo sleeve to present the watch in its full glory, a legendary partnership was cemented once and for all. In lieu of leather, the Submariner was now affixed to a slim fabric strap. Meanwhile, infamous Bond girl Pussy Galore (yes, that’s her actual name—Google it with caution) sports the Rolex GMT Master Reference 6542, a classic aviation watch if there ever was one. 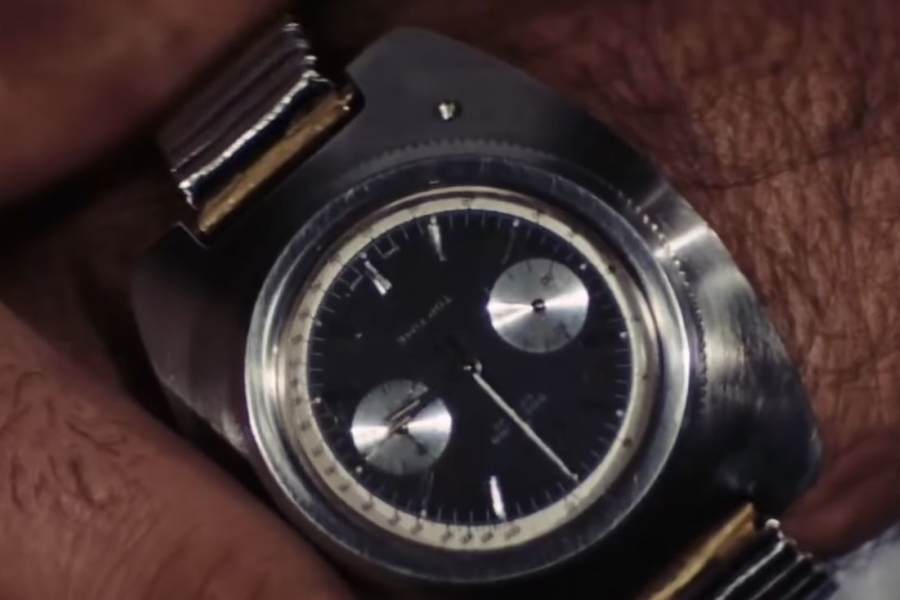 James Bond is back and so is his trusty Submariner in this fourth franchise instalment. However, Q Branch also has a new toy for 007 to play with: a modified Breitling Top Time Chronograph that doubles as a Geiger counter. Can you guess as to whether Bond needs to use the extra function at some point in the film? We bet you can. Fun fact: the same Breitling watch made its way to an English flea market in 2013, where it was purchased for a mere £25. The owner then turned around and resold the watch for over £100,000 at auction. Cha-ching! 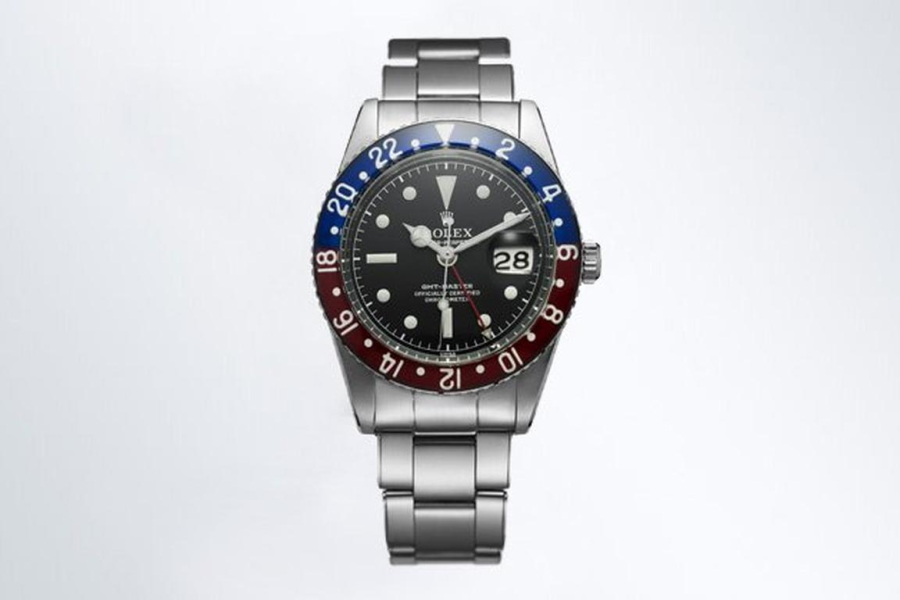 We’d be inclined to exclude this poorly-aged parody from the list, were it not for the fact that David Niven’s Bond can be seen wearing a Rolex GMT Master. Between that and Fleming’s original book, some might say that Rolex is the true “Casino Royale” watch, though Omega probably begs to differ. 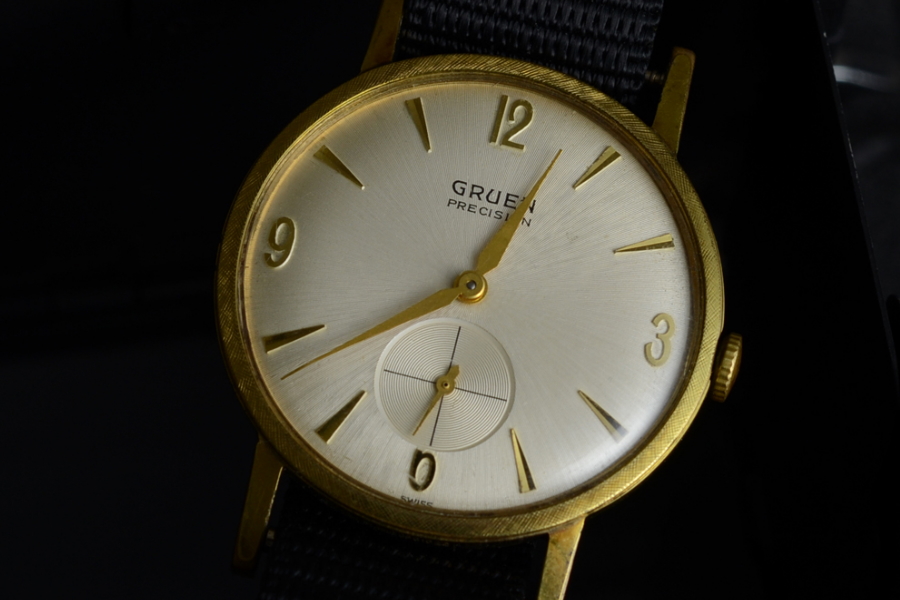 The jury’s still out as to what Bond wears around his wrist in this 1967 instalment, which pits him and Japanese ninjas against SPECTRE and supervillain Ernst Stavro Blofeld. Most folks suspect it was probably a gold Gruen watch straight out of Connery’s personal collection. The Gruen Watch Company was a historic brand that shuttered in 1977 and then came back to life under new ownership in 2000. 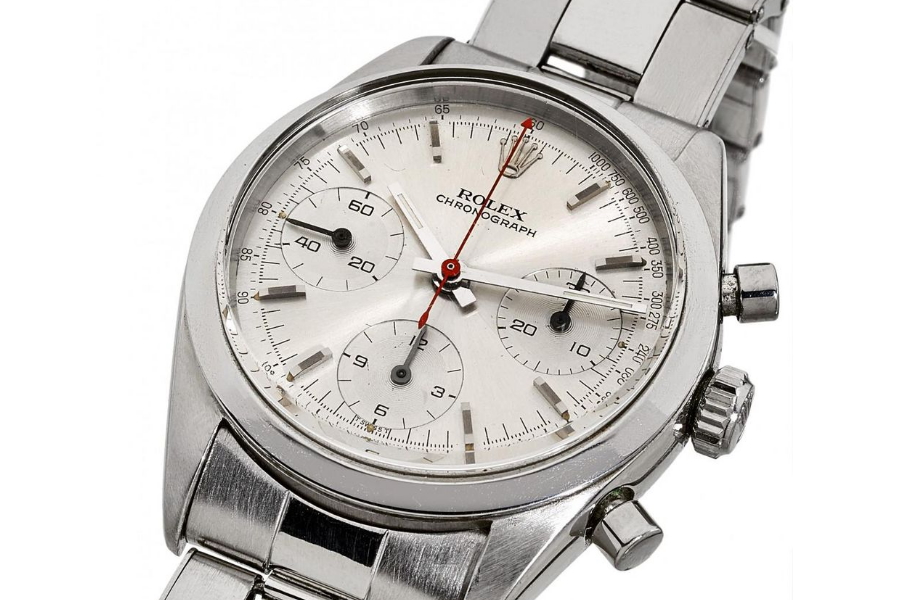 For his one and only stint as Agent 007, Australia’s own George Lazenby wore three different Rolex Submariners. First up was the Reference 5513 on a bracelet of iconic Oystersteel. Then during a break-in scene, Bond places a Reference 6358 with an unscrewed crown on top of a copy machine. Later in the film, he’s seen wearing a Reference 6238. Here’s hoping the actor got to keep at least one, if not all, of those seminal models.

Sean Connery was back as Bond for the franchise’s seventh instalment, which featured no shortage of spectacle and seduction. While a wristwatch does appear during one scene, it’s basically impossible to make out the exact model. Most folks agree it was likely the same gold Gruen watch Connery possibly wore in “You Only Live Twice.” 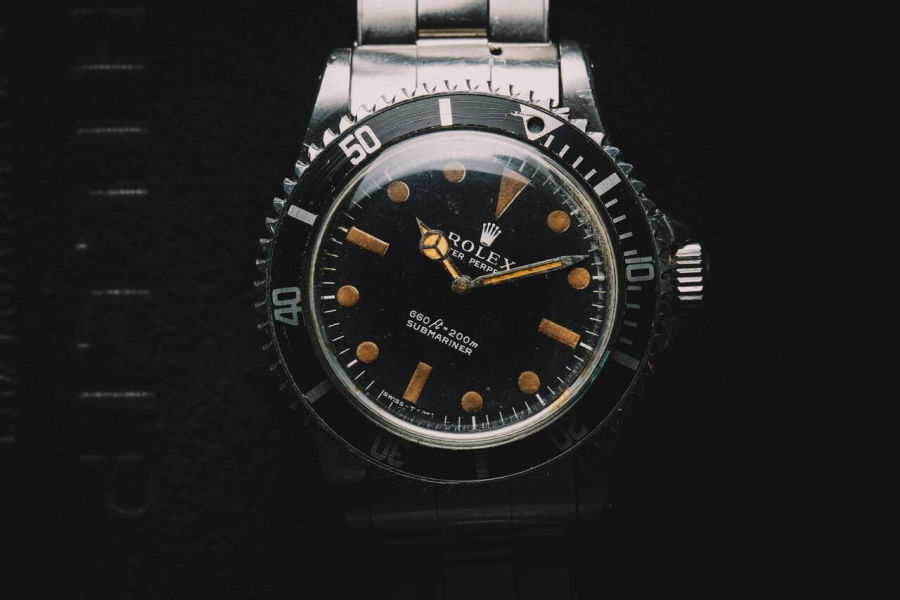 Roger Moore’s debut as Agent 007 introduced a new era for the franchise itself. It also brought back the classic Rolex Submariner, but with a now-iconic twist. Thanks to some handiwork by Q and his team, the watch additionally functioned as both a circular-saw and a magnet, predictably helping Bond out of a jam or two. 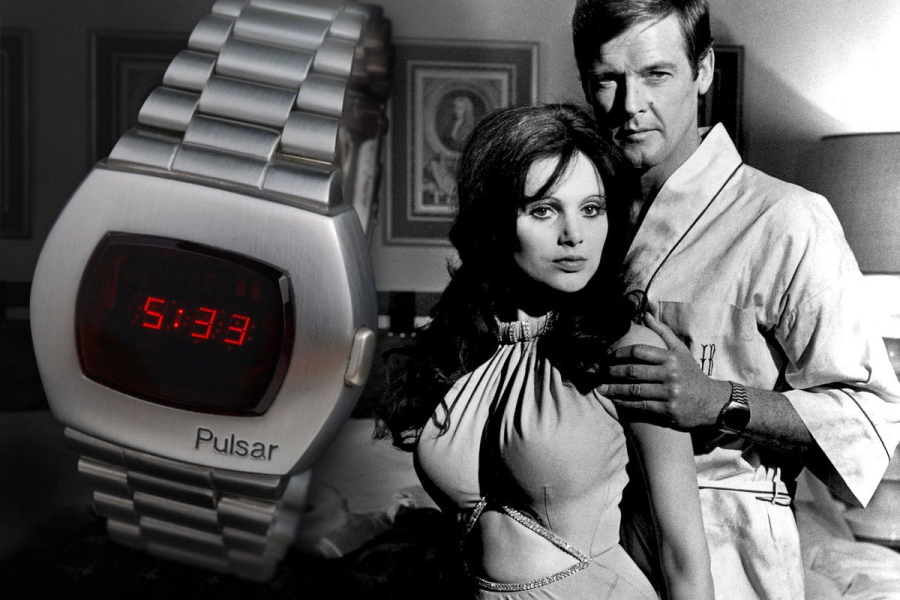 During the film’s opening sequence, meanwhile, the superspy wears a Pulsar LED digital watch from Hamilton Watch Company. To say it was a good PR move for the nascent quartz watch industry would be putting it mildly. 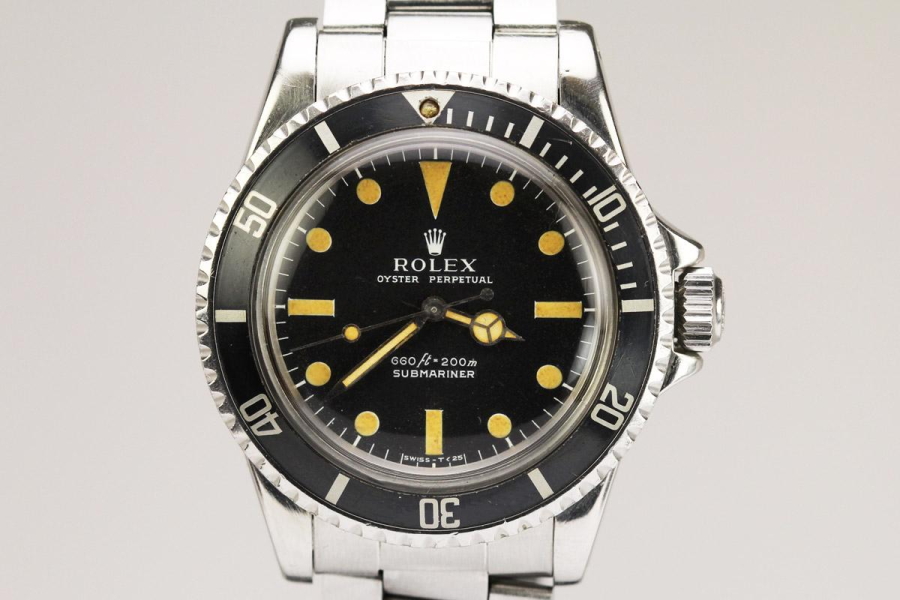 If the words “James Bond Rolex” went by any other name, that name would be Rolex Submariner. The model appears once again in “The Man with the Golden Gun,” albeit minus any tricks or gadgets. It nevertheless makes for one stylish statement. 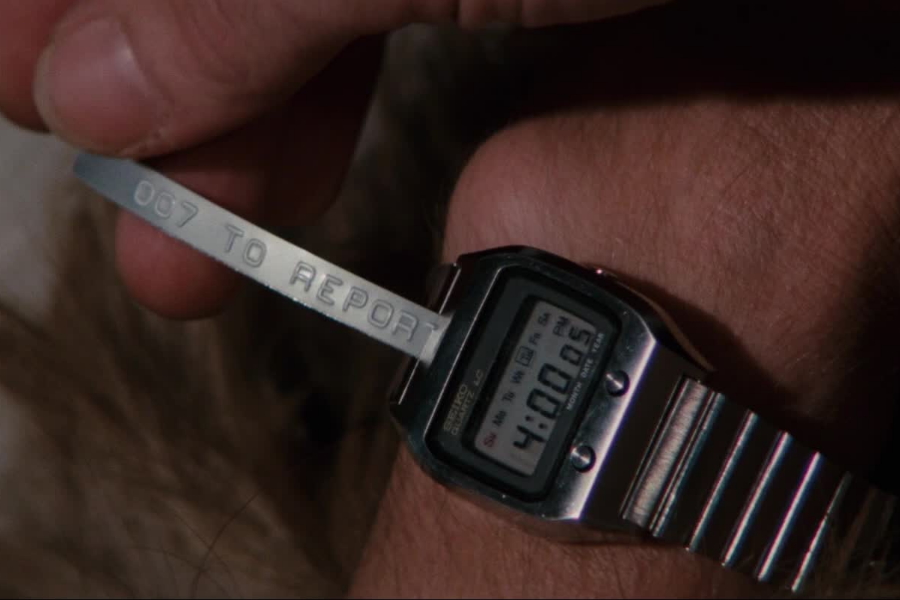 Digital watches were on the rise by the mid to late 1970s and the Bond franchise was duly keeping pace. Not only does Agent 007 wear a rectangular Seiko 0674 LC in this popular film, but the watch prints out tiny little messages from a fellow superspy. Keeping the analog spirit alive is a Rolex GMT Master, which Bond uses for timekeeping. 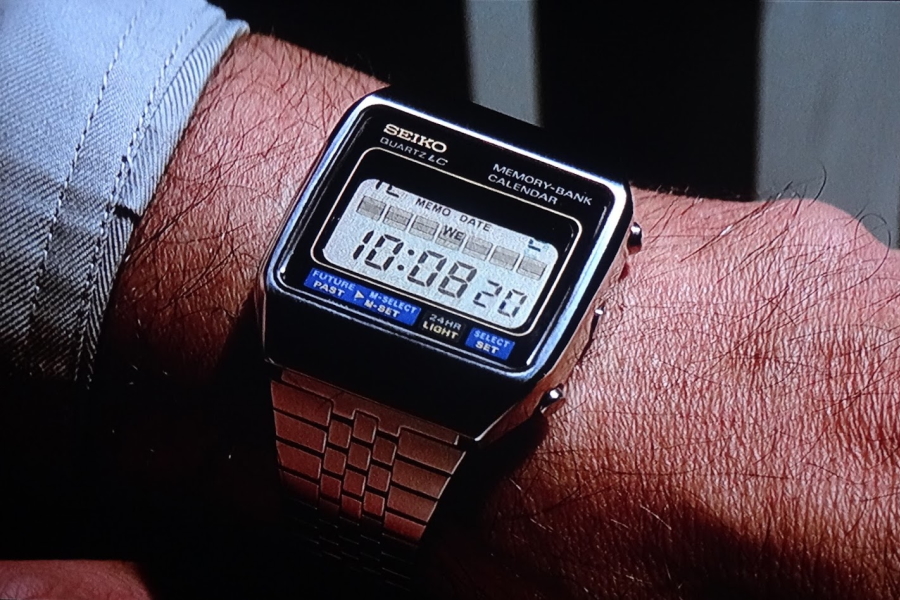 It’s no surprise that James Bond went all-digital for this outlandish, space-themed instalment. On the back of his fancy new Seiko M354 Memory Bank Calendar is an explosive charge, which plays a big role toward the finale. Kaboom! Film: For Your Eyes Only
Year of Release: 1981
Actor who played James Bond: Roger Moore

The thirteenth Bond film features not one, but two Seiko watches. One is a 7549-7009 while the other is an H357 with both analog and digital display. Like an early forerunner to the smartwatch, the H357 Duo Display delivers text-like messages and contains a built-in microphone. Along with a scandalous film title came a new Seiko watch, complete with extra perks from Q Branch. Among those extra perks was the ability to follow a tracking device by way of a digital red dot on the screen. Even without the fantasy features, the Seiko G757 Sports 100 was an impressively functional digital chronograph in its own right. Sean Connery reprised the role of Bond for one last time and then indeed said never again. As memorable (or unmemorable) Connery’s return may have been, there was no detectable watch to mark the occasion. Bummer. 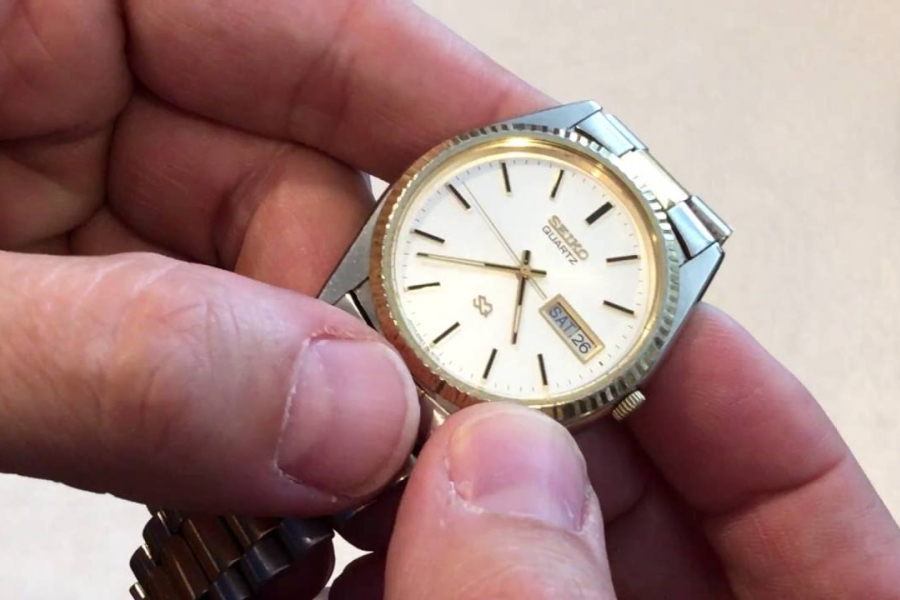 For his final appearance as British superspy James Bond, actor Roger Moore rocks no less than four watches. That includes the Seiko SPR007 7A28-7020, a quartz chronograph with a white dial. Also making brief appearances are a Seiko H558-500 SPW001 dive watch and a two-tone Seiko 6923-8080 SPD09. Last but not least, Bond is wearing a Rolex Datejust when he discovers that his driver has been killed. 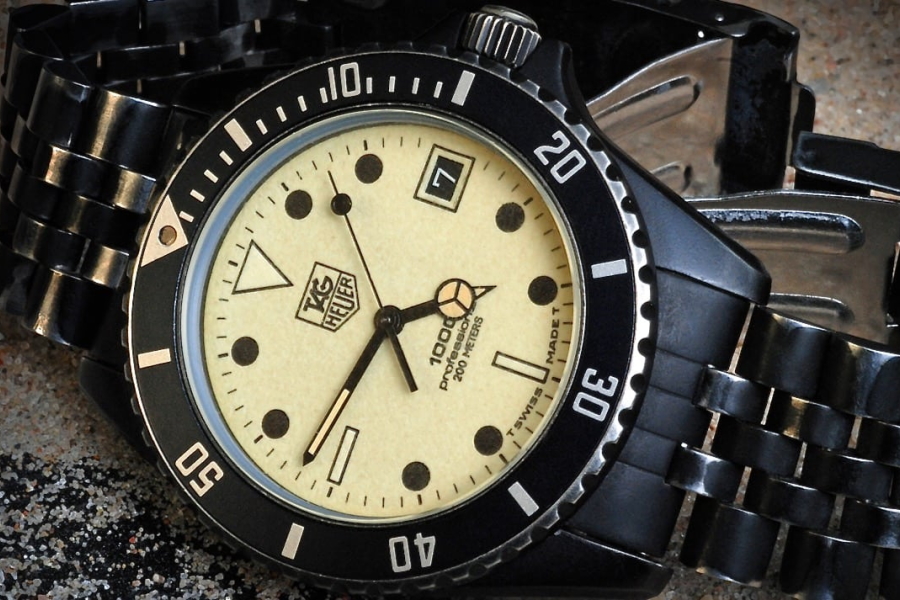 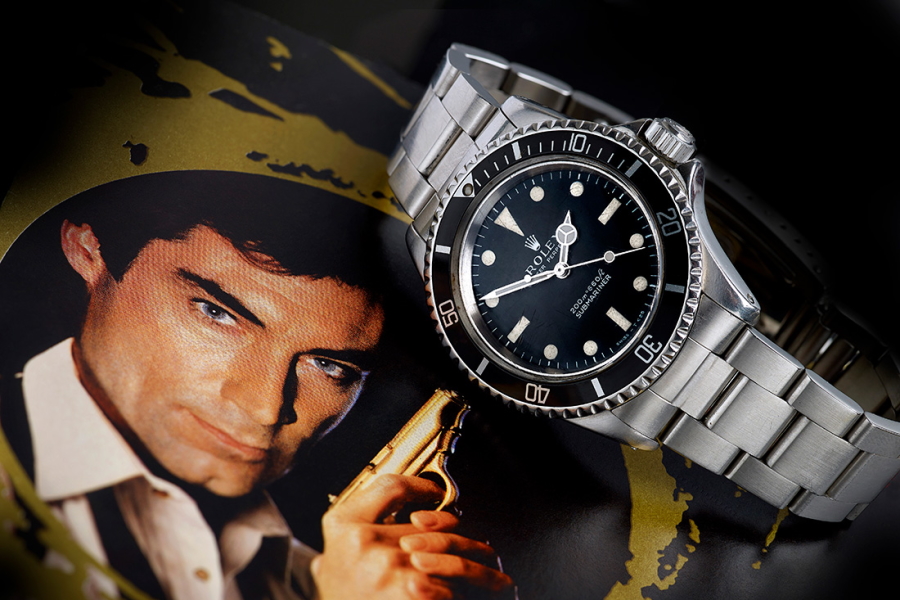 Dalton’s second and final performance as James Bond brought Swiss legend Rolex back into the fold for one last adventure. Honouring an iconic tradition, Agent 007 equips himself with a trusty Rolex Submariner (most likely a Reference 16610). After that, it was goodbye to Dalton and Rolex alike. 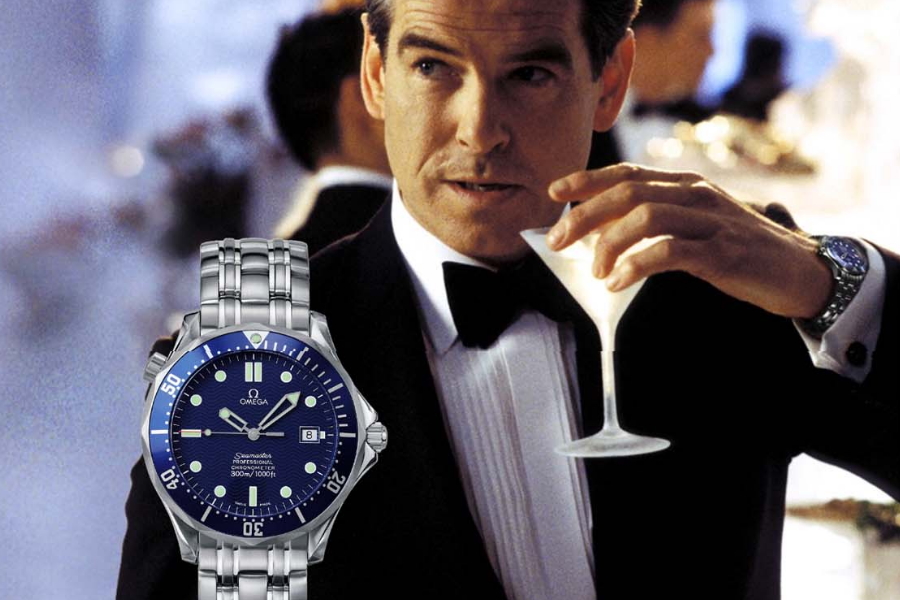 The James Bond franchise came roaring back to life in the mid-90s, with Irish actor Pierce Brosnan tackling the lead role. Thanks to his sharp looks and sly demeanour, Brosnan made for a truly sound and reliable choice. Representing more than one debut, 1995’s “Goldeneye” also introduced Omega as the franchise’s official watch partner. Enter the “Goldeneye” watch, i.e. an Omega Seamaster Professional 300M Ref. 2541.80 quartz dive watch. True to form, it was tricked out by the Q Branch, touting a laser in the bezel and built-in detonator. 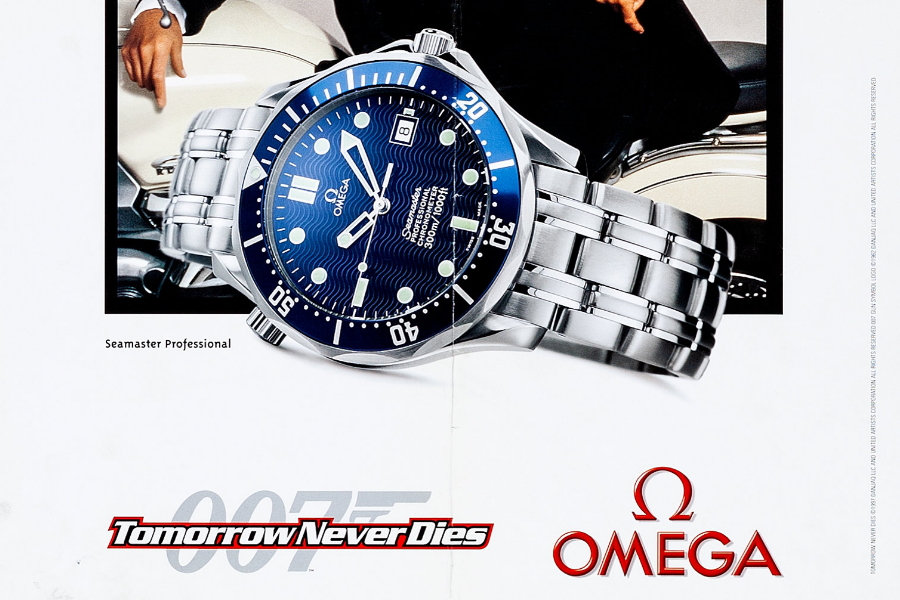 Pierce Brosnan returned and so did Omega for this 1997 instalment, which pitted Bond against a power-hungry media mogul. The watch of choice was an automatic chronometer version of the beloved Seamaster, which could remotely detonate a hand grenade (thanks, Q!). 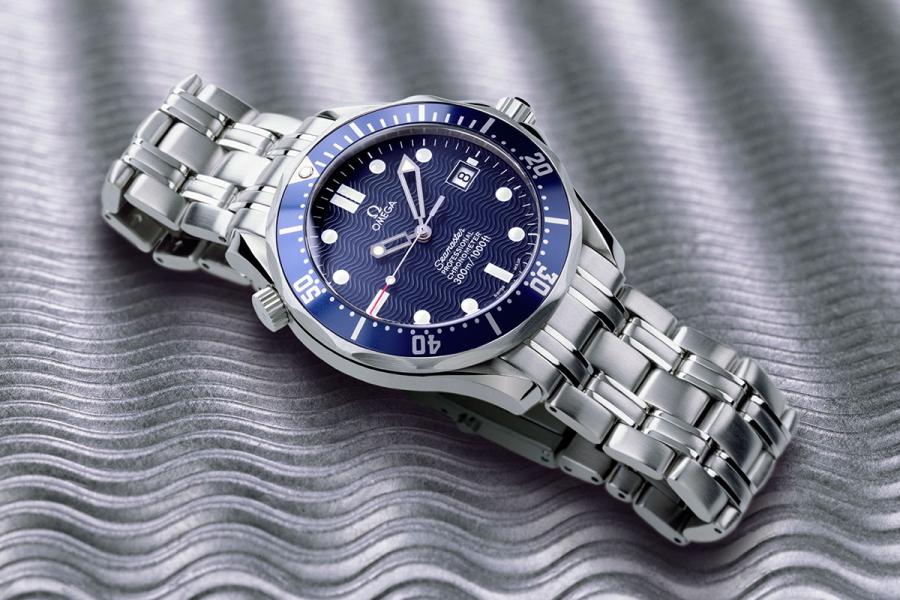 They say repetition is key to marketing and who was Omega to reinvent the wheel? As such, Brosnan wore the same Omega Seamaster in this film as he did in the previous one. However, the watch did feature new gadgetry, doubling as both an ultra-powerful light source and a quick-action grappling hook. 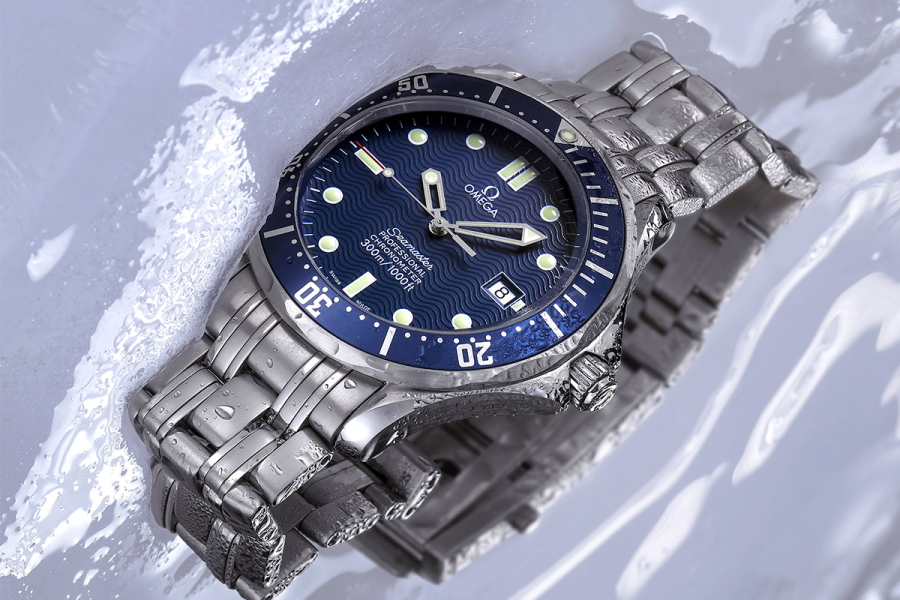 Presuming you can get a bikini-clad Halle Berry off the mind, you’ll notice that the Omega Seamaster Professional 300M Ref. 2531.80 is back for Brosnan’s final Bond film. Harkening upon its gadget-infused predecessor—aka the tricked-out “Goldeneye” watch—this one features both a built-in laser and detonator. 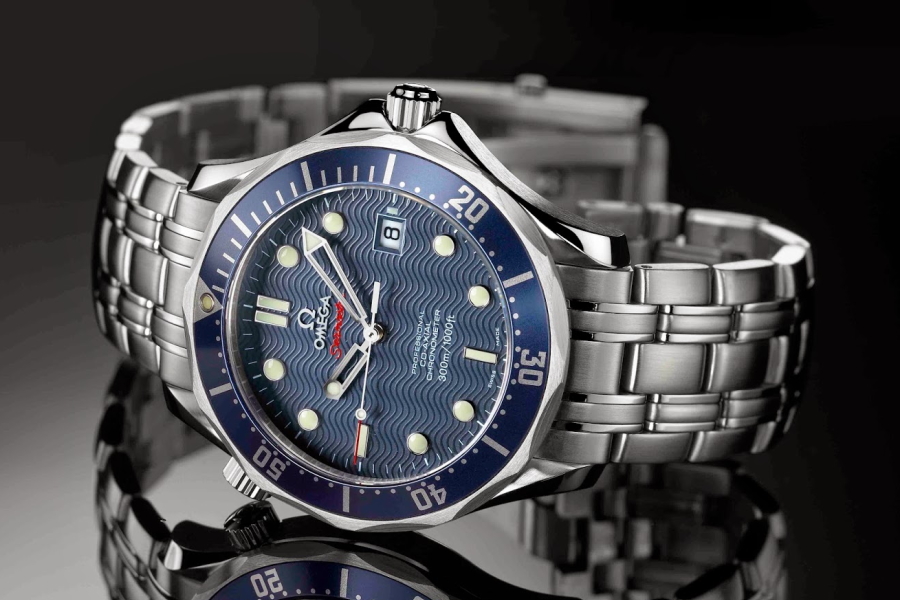 By 2006, there was a new Bond in town and a new actor to portray him. That actor was the uber-serious Daniel Craig, who kicked things off by taking us back to where the whole saga began. Marking the occasion was not one, but two “Casino Royale” watches. The first was a Seamaster Planet Ocean, which Bond wears during the opening sequence. For the remainder of the film, he’s rocking an automatic Seamaster with co-axial escapement. Widely considered a disappointment, 2008’s “Quantum of Solace” features brief glimpses of an Omega Seamaster Planet Ocean with a stainless steel bracelet. Between its water resistance to 600m and Bond’s plunges into the deep sea, you’d think the watch would get more screen time. On the other hand, that’s just one among a legion of things the movie could’ve done differently. 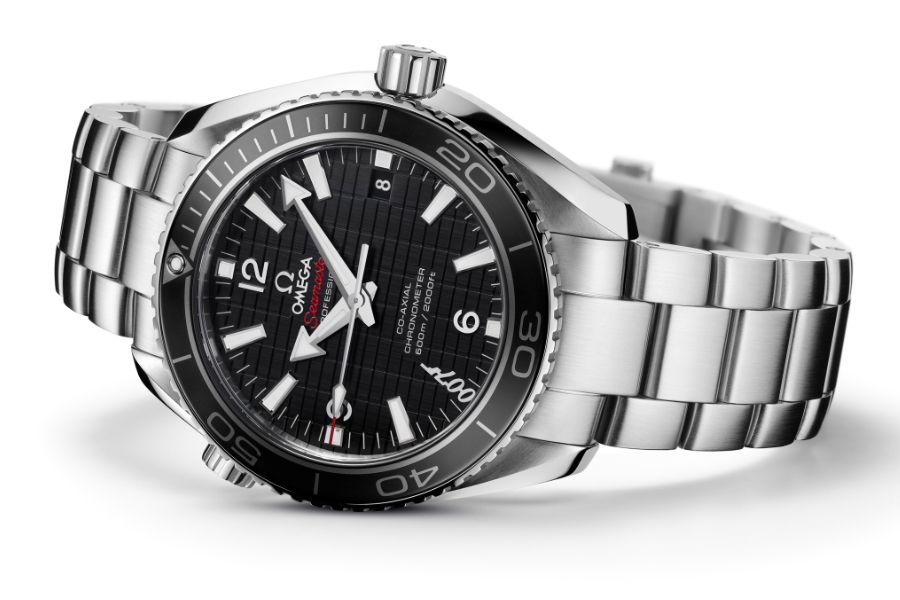 Two different Omega Seamasters appear in “Skyfall,” one of the franchise’s highest-rated outings. During the opening scenes, Bond sports a Planet Ocean 600M with a unique case of titanium. Fun fact: that same watch later sold for just under 200,000 Euros at Christie’s “50 Years of Bond” auction. The other model was an Aqua Terra with a stunning blue dial and stainless steel bracelet. 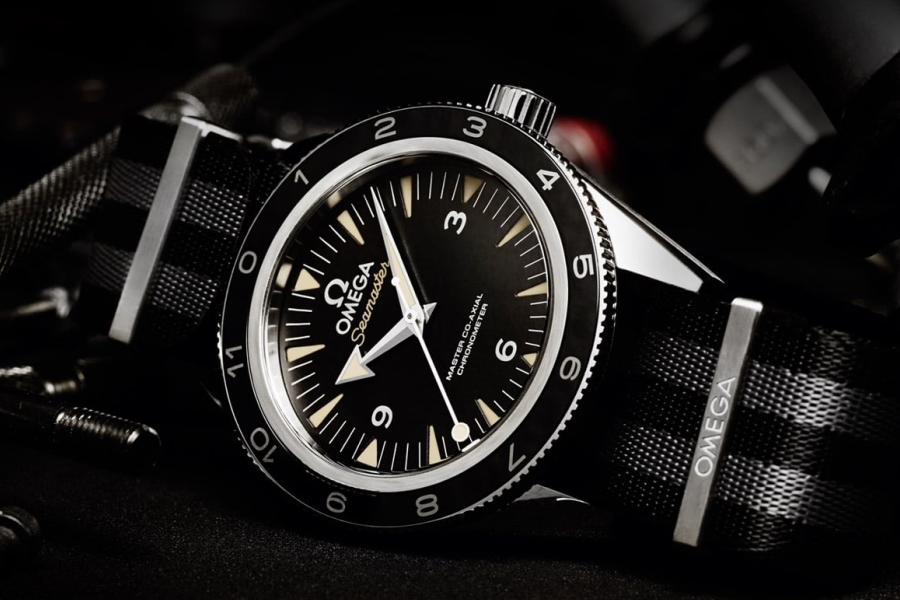 Courtesy of Q Branch, Daniel Craig gets his first tricked-out Omega Seamaster 300 in 2015’s “Spectre.” Designed exclusively for the film, the watch features a NATO strap and comes equipped with explosive capabilities. Bond also wears an Aqua Terra model with a black dial earlier in the film, but it’s the Seamaster that remains synonymous with this particular instalment. To prove as much, Omega released a Limited Edition “Spectre” Seamaster 300 for purchase. Fortunately (or unfortunately, depending on who you ask), this one doesn’t double as an explosive device.

You’ve run through the movies and the watches in order but still have some questions. Here are some answers.

What brand of watch does James Bond wear?

What is James Bond's watch?

What watch does Bond wear in Dr No?

James Bond wears a Rolex Submariner Reference 6538 in “Dr. No.” According to legend, it came from actor Sean Connery’s personal collection.

What Omega watch is James Bond?

Does James Bond wear a Rolex or Omega?

What Omega did James Bond wear?