Likewise, we’re certain the true connoisseurs among you will be delighted to find some rare gin to sip neat, one that you simply never expected to come across in the flesh. Presenting the 17 Best Gin Bars in Melbourne (and then some bars that just make a damn good gin cocktail). Just like a great spirits menu or sprouting juniper plant, this is a list that seems to keep growing and growing with each passing year. Yum. 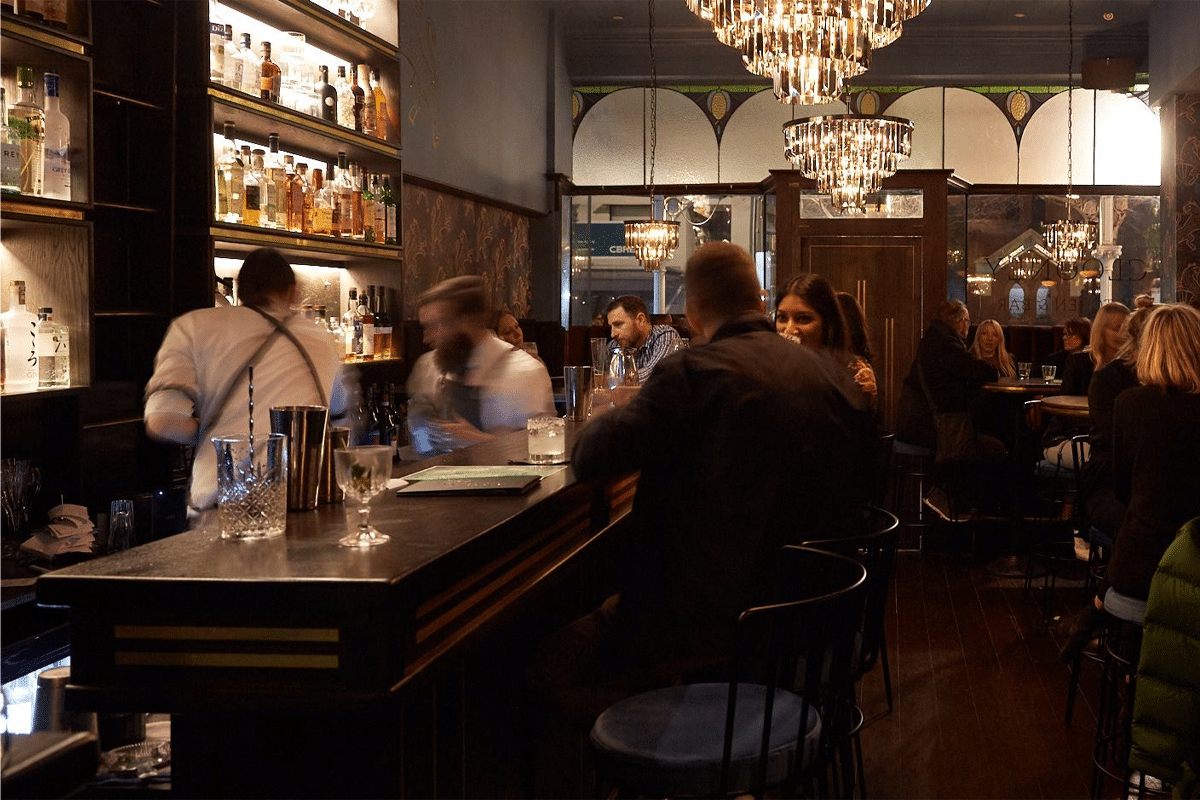 Widely regarded as the best bar in Port Melbourne, Clooney Kitchen & Bar is the best place to enjoy a drink, a bite to eat, and a great night out. Winning Time Out’s best new bar in 2019, they’re the best place to wind down after a long day at the office or go to for a night out with friends. The drinks menu is sophisticated yet simplistic, this gin bar in Melbourne takes pride in sourcing the best ingredients possible. Gin & Yuzu Spider is a must-try, featuring Nosferatu Bloodorange Gin, Citrus Syrup, Lemon, Tonic Water, Yuzu Foam. 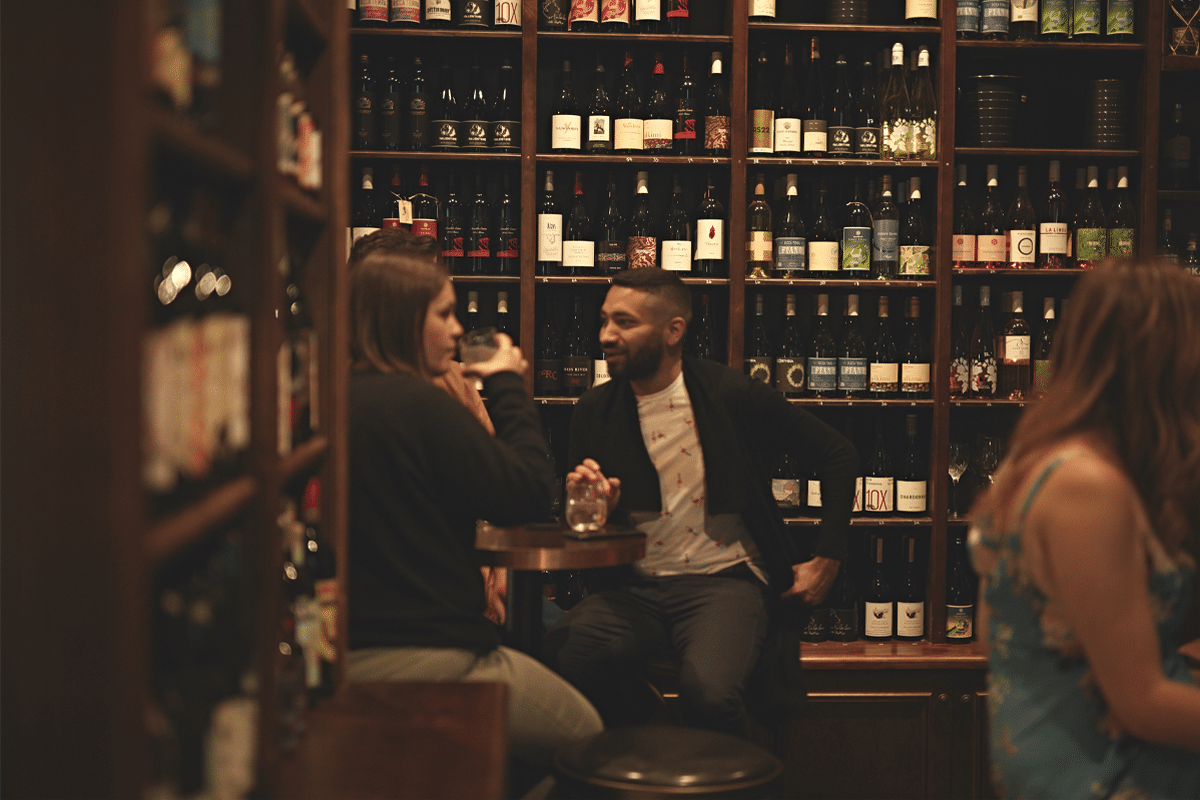 Nestled in the heart of the CBD this gin bar in Melbourne also doubles as a bottle shop. Set in a building that’s had its doors open since 1901, this is a great spot to relax on a Friday or Saturday afternoon. Bijou Bottle Store offers a gin heavy selection of house-made cocktails and spirits that rotate regularly. 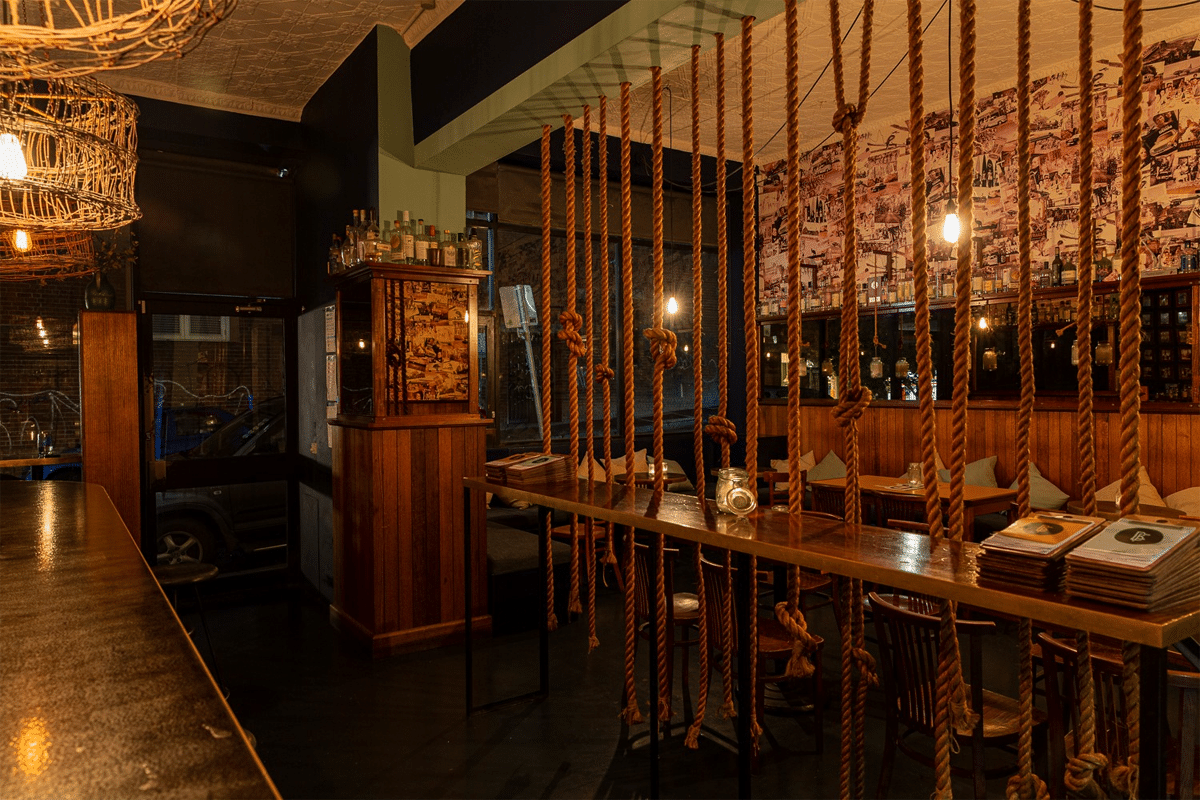 Devoted entirely to Australian-made spirits, think of Bad Frankie as the Australian history teacher you wish you’d always had. Named after the sod who banned the small-pot still in Australia, which, for 150 years, stifled any chance of a holistic craft liquor industry, Bad Frankie has a vast range of the excellent white and brown spirits now being produced in the land, and the friendly staff has the knowledge to back it all up. Try something you’ve never heard of and pat yourself on the back for supporting a local. 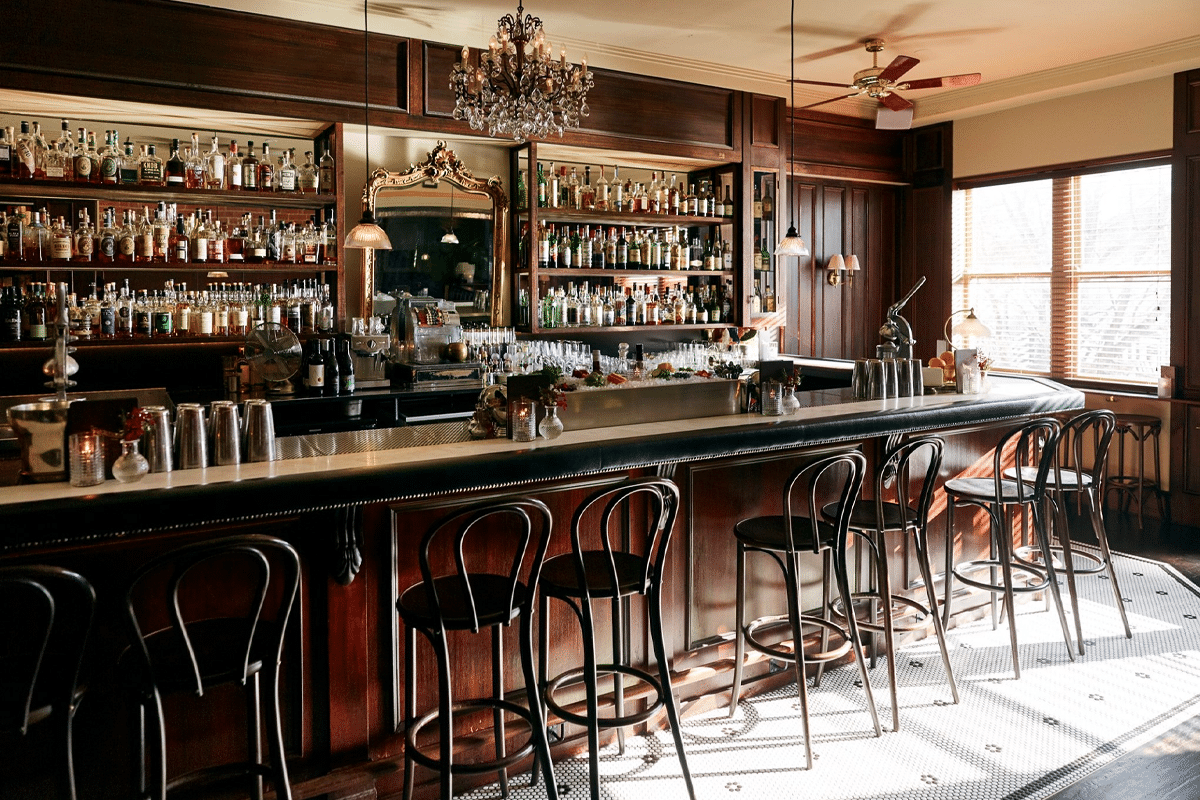 Walkthrough the door of this underground establishment to enter a world of endless invention and epicurean delight. Eau De Vie easily makes some of the best and most creative cocktails in town. Behind the bookcase is a secret whisky bar of jaw-dropping magnitude and their front-of-the-house gin selection is likewise nothing to scoff at. Needless to say, this is one of Melbourne’s best bars, period. Accordingly, the privilege of visiting will cost you. 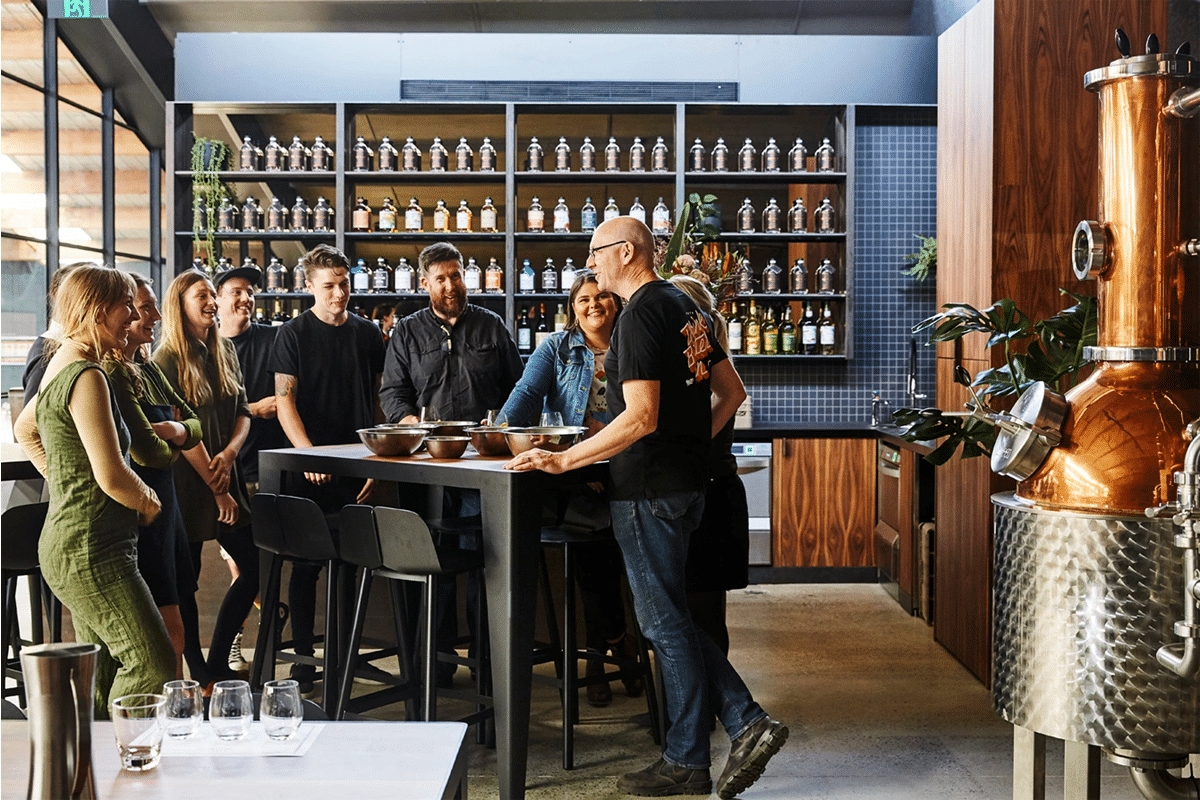 Four Pillars Gin is a craft distillery based in Healesville in Melbourne’s Yarra Valley. They’ve been making gin since they were founded in 2013, so they know a thing or two about botanicals. From their original multi-award-winning, Rare Dry Gin to the only gin in the world made just for a Negroni, they’ve always based their gin on the four pillars of great gin. The copper stills, pristine Yarra Valley water, traditional, exotic and native botanicals, and a massive amount of love and attention to detail at every stage of the production process. This location is primarily a gin distillery so you can’t get up to too much trouble but it’s certainly a nice place to try some world-class drops. 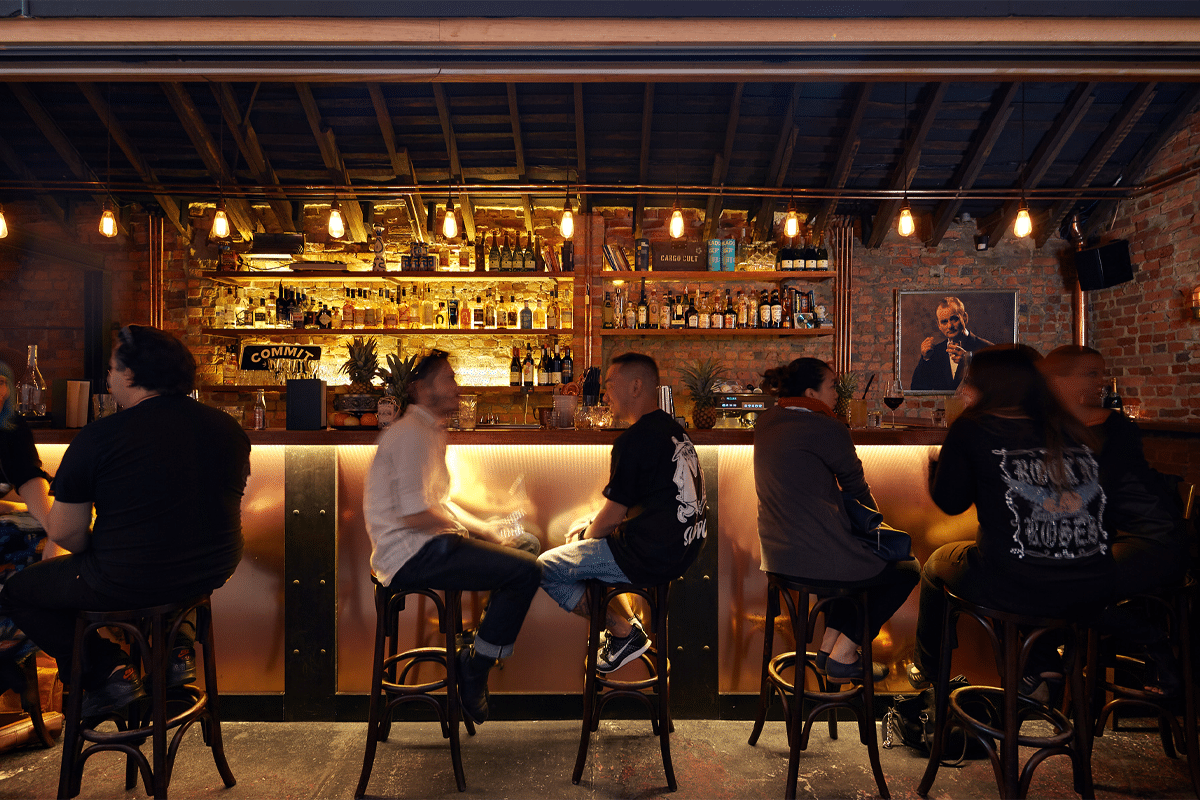 What was once just another secret Melbourne bar, has transformed into a well-known hotspot for some lively Latin American music and cocktails. It’s in the name, Union Electric Bar & Rooftop Gin Garden features some of the best gin cocktails in Melbourne. Fresh fruits and vegetables are at the heart of the menu, with raspberry malt shrub, elderflower and micro herbs for enticement. One thing to note, the bar doesn’t have a kitchen, so don’t go in expecting a feed. 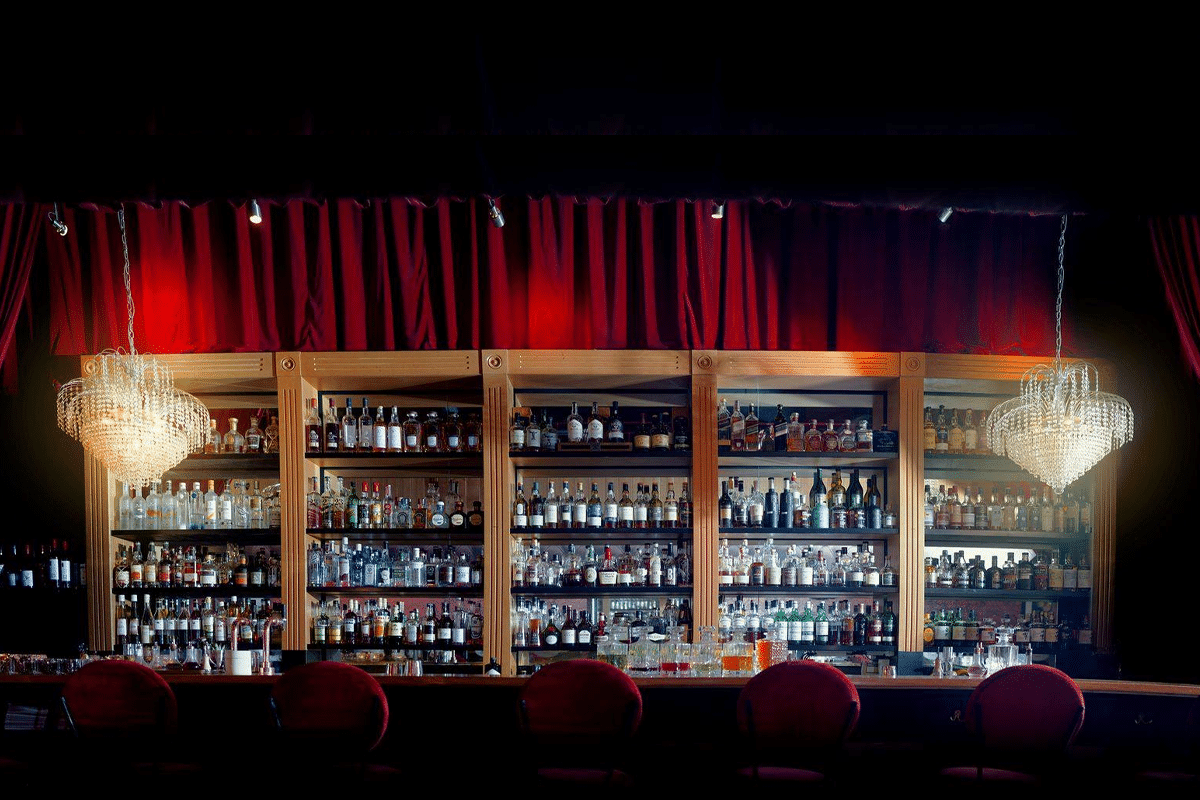 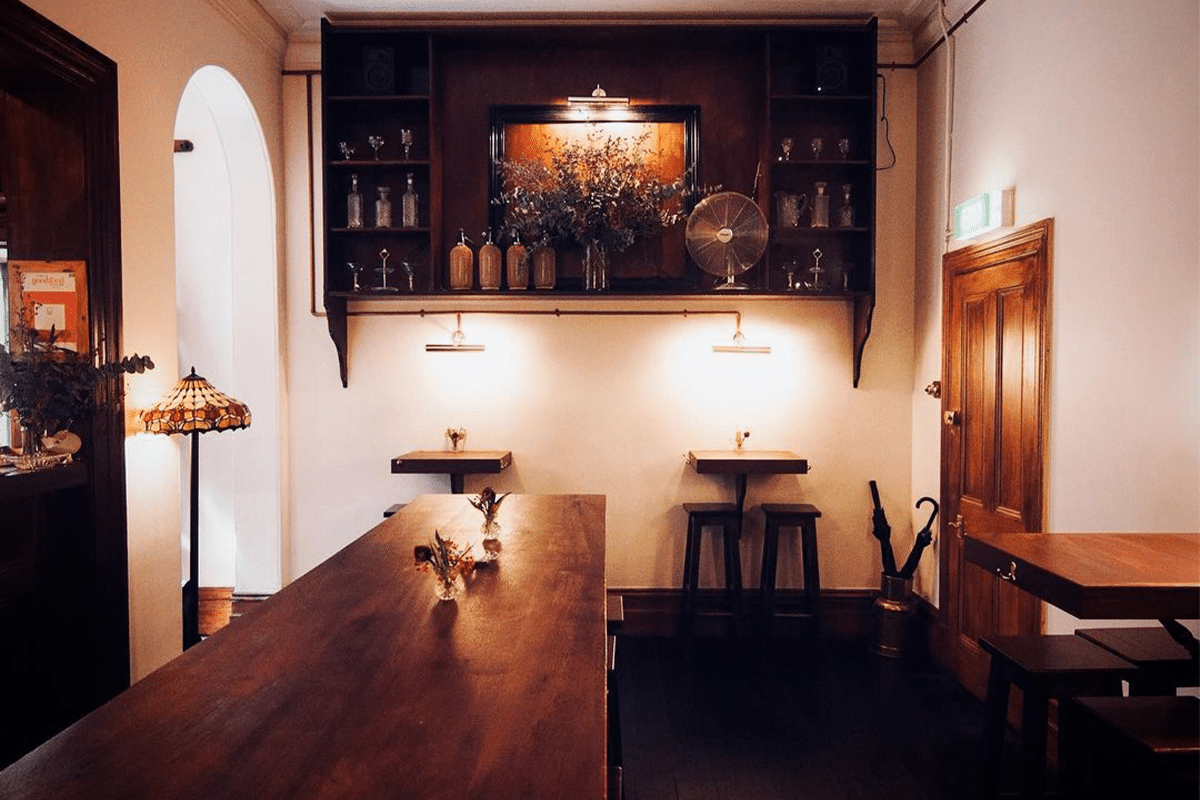 Yet another concealed laneway gem, Romeo Lane couples masterful cocktails with a sophisticated ambience to stunning effect. Rest assured any gin cocktail you get here might be the best you’ve ever tried. Indeed, Time Out recently declared that Romeo Lane is making “the best drinks in the city right now”. In booze-crazy Melbourne, that’s quite a feat! Hell of the North is a hell of a name for a bar. But is it one of the best Gin Bars in Melbourne? Well, sort of, it’s really more of a wine and beer joint. But you will find some gin cocktail classics here, made to perfection. If you’re a best of all worlds drinker, the gin-based Corpse Reviver No. 2 has your name written all over it.


Hell of the North 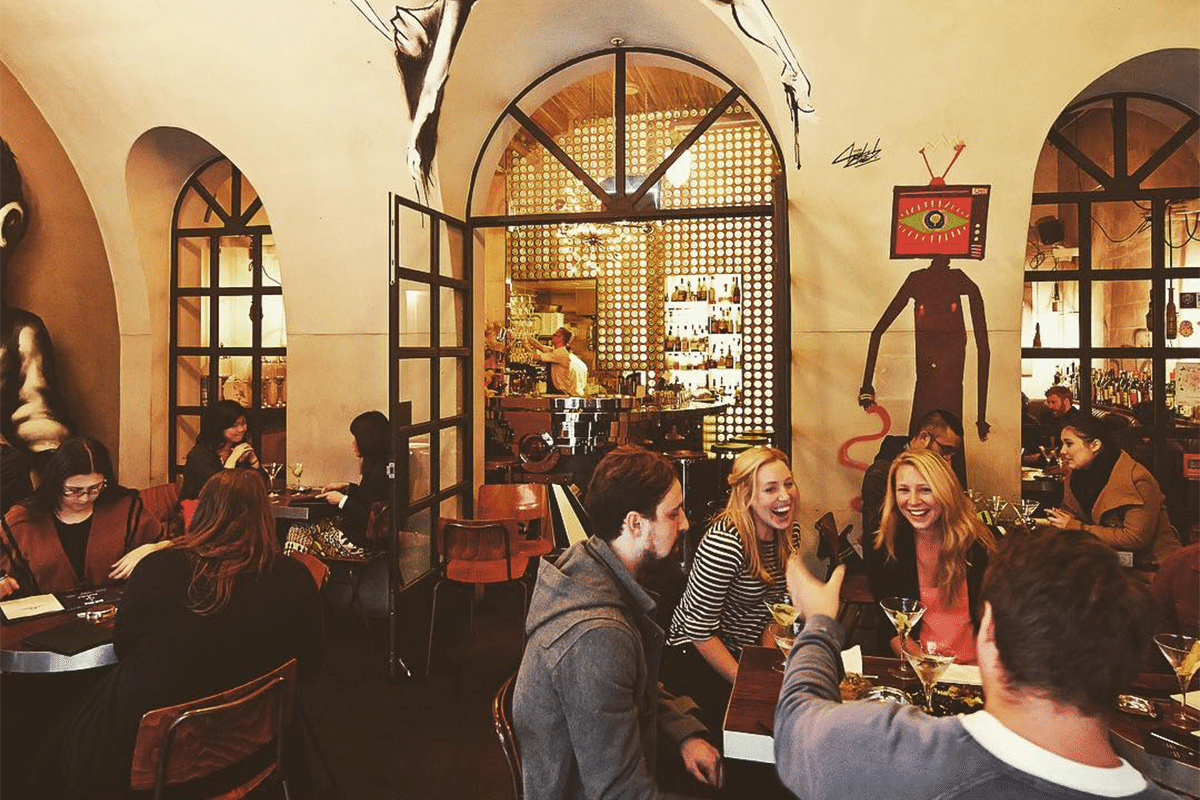 Absinthe and aperitifs are the specialty at this hidden tripped-out joint but don’t think that doesn’t mean you can’t find a healthy selection of gins and other spirits. Also known for their signature cocktails, tasty small bites and late hours, Bar Ampere is the perfect place to start your day or cap off your night. 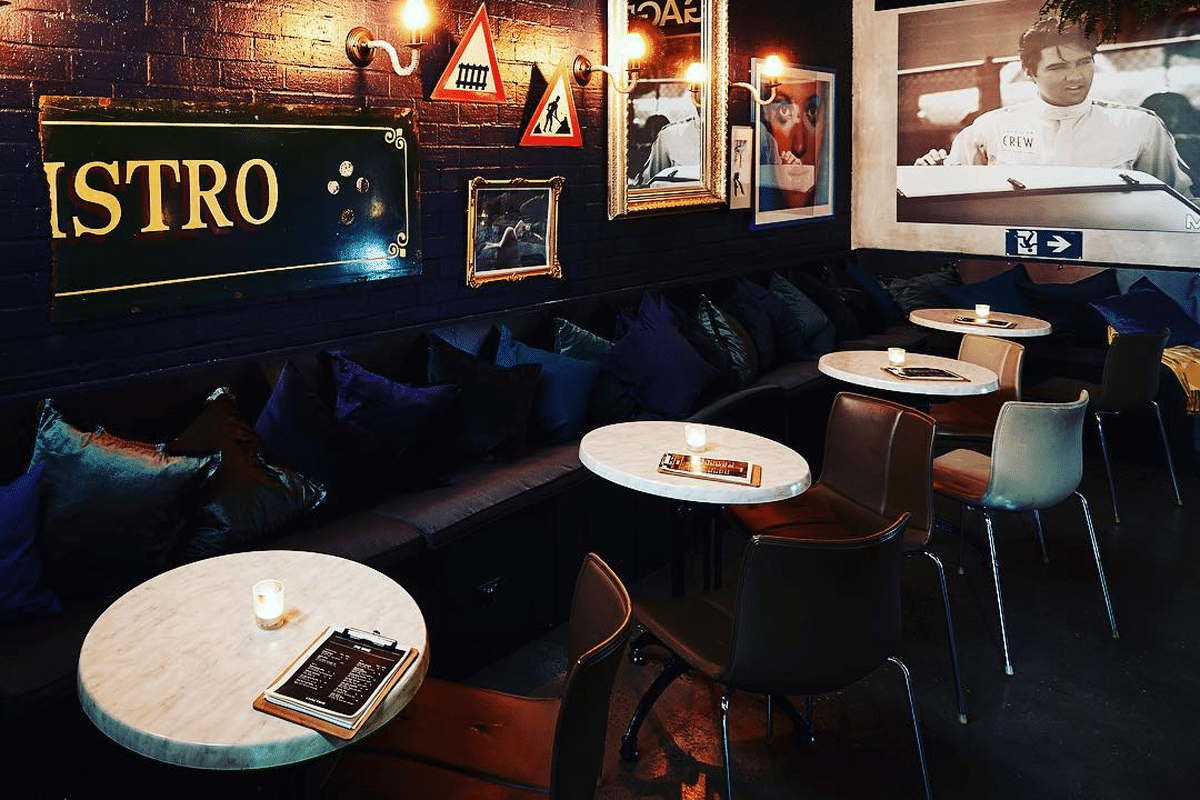 Here we have another elusive gem (complete with a secret door) that does Melbourne proud. The Store Room is a speakeasy-style lounge that will definitely give you a night to remember, assuming you can find it. Expect a stellar selection of spirits and gins in particular, since no prohibition-themed joint would have it any other way. Everyone loves this place so get in on the secret as soon as you can! A staple for locals and tourists, Gin Palace has now been on the scene for 20 years as the one-stop venue for gins of the world, big martinis and a Champagne list that would rival most Bottle-Os. This gin bar in Melbourne is one of those places that made locals start saying ‘the small bar scene here is excellent’ long before it really was, and even longer before Sydney caught on. The best part is the fact they’re open until 3 am, every day of the week. It’s called Gin Palace for crying out loud, of course, it’s one of the best gin bars in Melbourne. 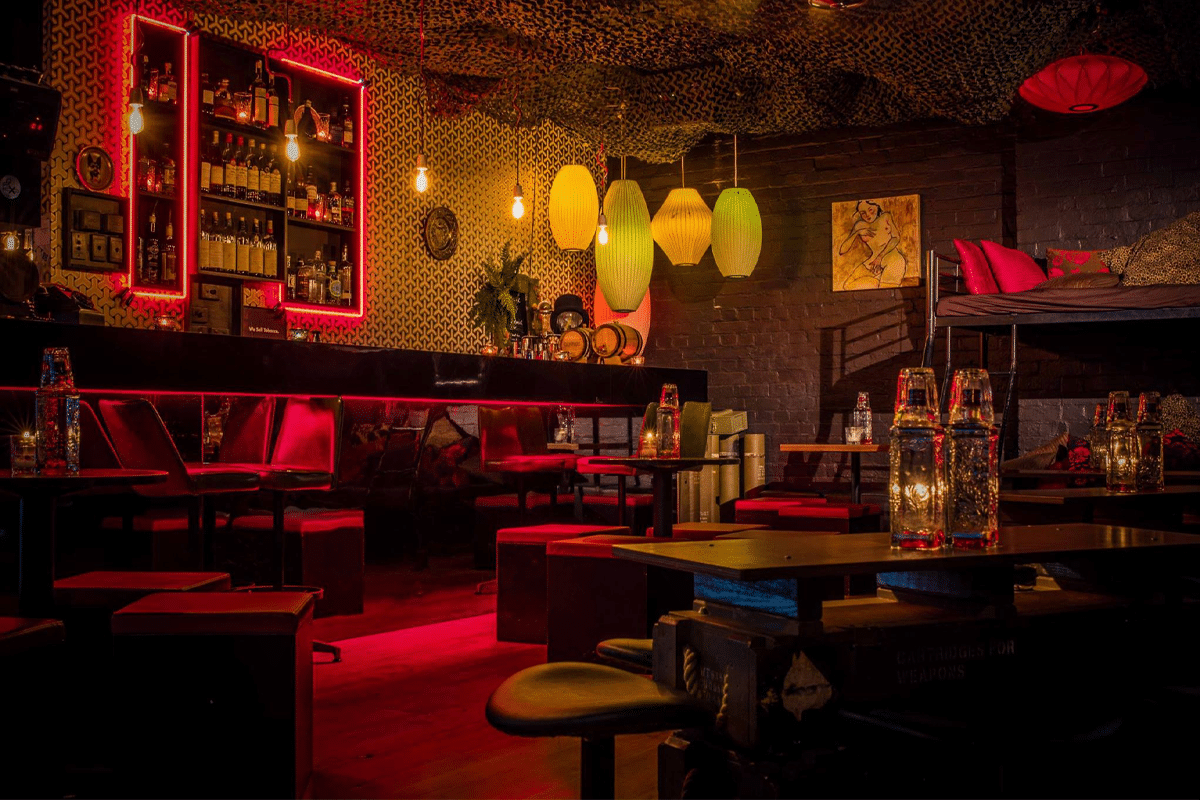 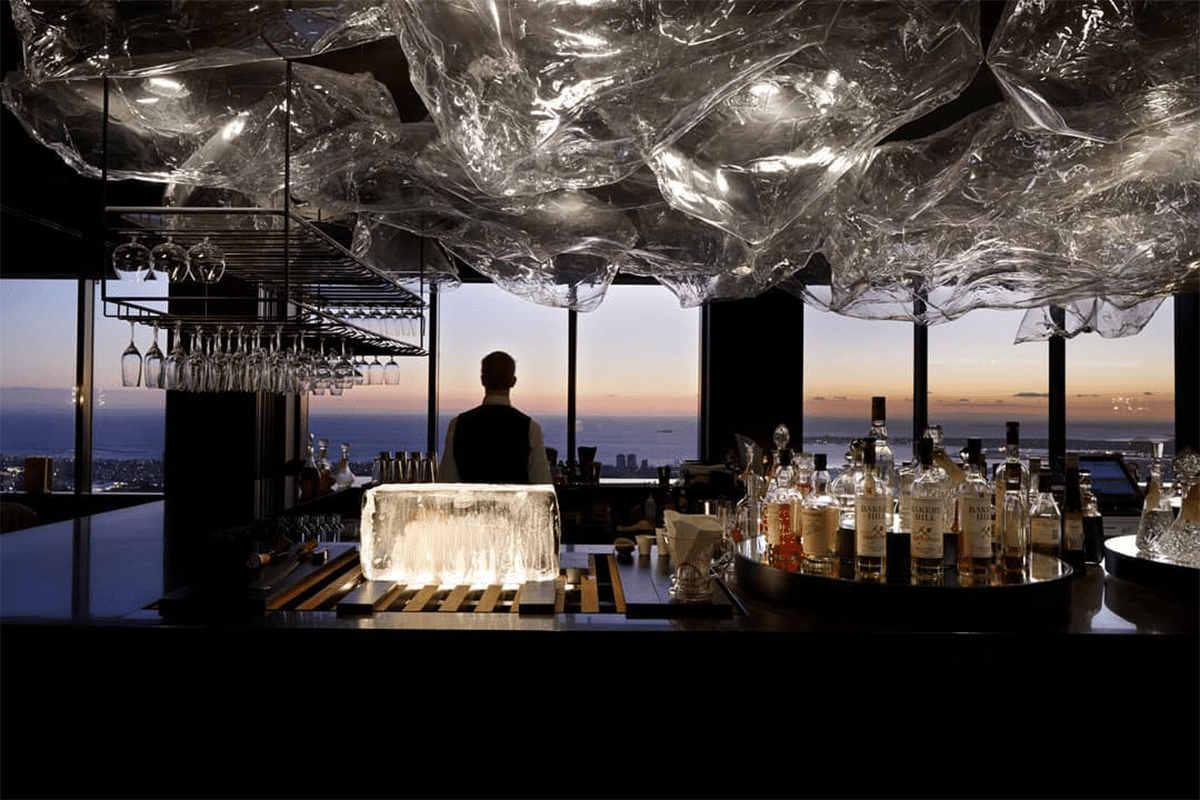 Nothing enhances an unforgettable juniper cocktail quite like an equally unforgettable high-rise view. For that, The Lui Bar has you covered to the tune of 55 stories. Engorge in their extensive selection of gin martinis (and small bites) while staring out across the epic Melbourne skyline. Sometimes the best gin bar in Melbourne isn’t just about the gin. 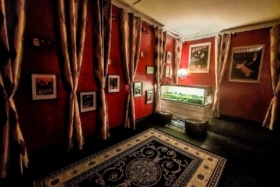