The highly anticipated 2024 Ford Mustang has been revealed, with an Australian release due next year that includes the special edition ‘Dark Horse’ variant. Debuting 60 years after the pony car was first unveiled to the world, the new Ford Mustang keeps elements such as the 5.0-litre V8 and manual transmission alive, while adding a host of modern technology to the interior with the inclusion of the SYNC4 infotainment screen and digital drivers display.

Enthusiasts will surely appreciate Ford’s move to bring back the famous marque in its seventh generation with pillars of its history in the V8 engine, manual transmission, and FR layout for what will likely be the last time.

“Investing in another generation of Mustang is a big statement at a time when many of our competitors are exiting the business of internal combustion vehicles,” said Jim Farley, CEO of Ford Motor Company in a statement. “Ford, however, is turbocharging its ICE growth plan, adding connected technology, opinionated derivatives, and hybrid options to our most profitable and popular cars – all in the Ford Blue family – on top of investing $50 billion in electric vehicles through 2026.”

Let’s take a look at the 2024 Ford Mustang Lineup and all the changes that have been made. 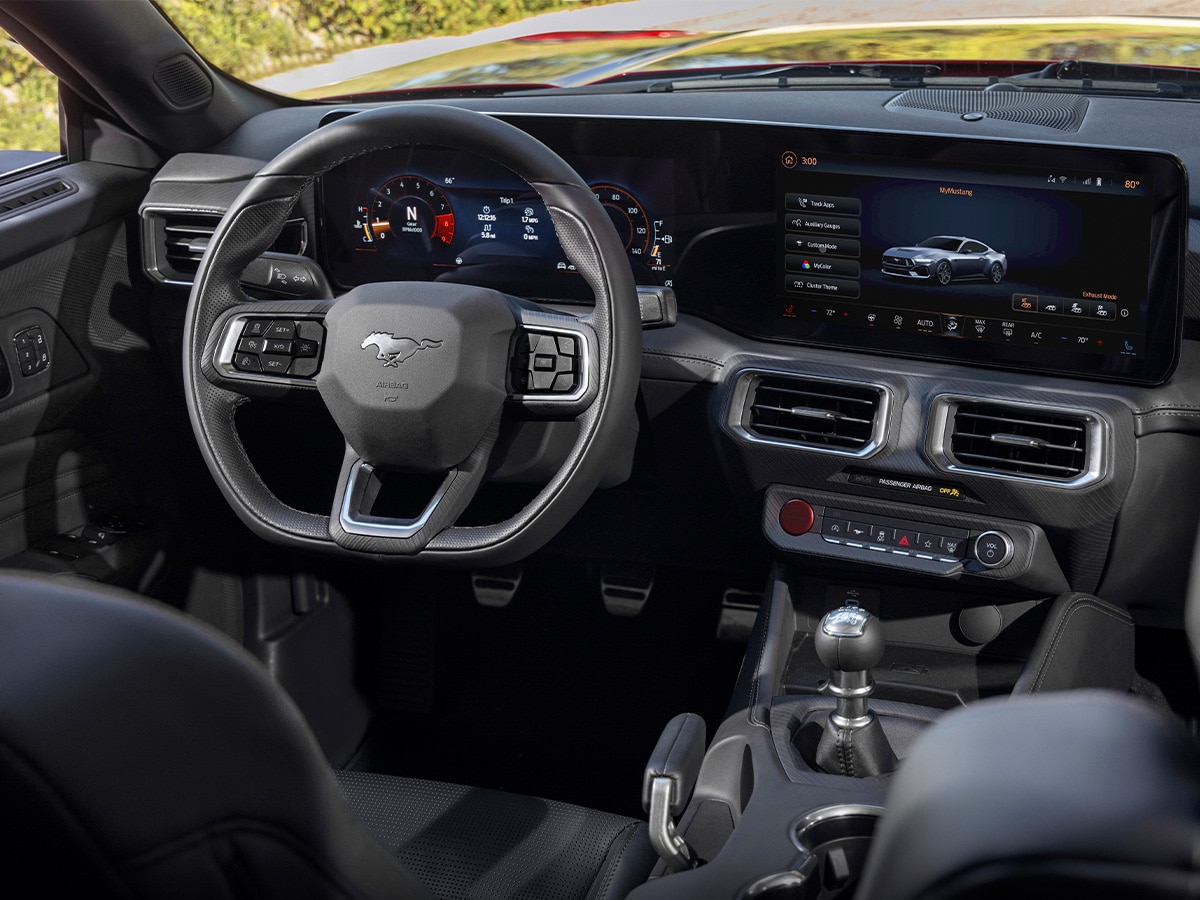 An all-new cockpit takes inspiration from a ‘fighter jet’ to offer the driver two flowing and curved displays that can be quickly customised to show the information the driver wants or needs to see.

“We’re taking advantage of every pixel,” said Craig Sandvig, Ford Mustang interaction design manager. “We can be creative showing necessary driving information yet also give the driver control to decide how to display everything from selecting colours to classic Mustang gauges to simply creating a ‘calm’ screen where only minimal details are displayed.”

The digital instrument cluster flows into Ford’s SYNC4 infotainment system with Apple CarPlay and Android Auto that’s mounted horizontally (as opposed to vertically like you’d find in the new Ford Ranger). We far prefer it in this horizontal application.

“We knew what customers wanted – it was a case of designing the most digital Mustang ever while retaining the all-important driver-focused cockpit,” said Ricardo Garcia, Ford interior design manager.

There’s a new flatbottom steering wheel for space when heel-toe downshifting, and on the exterior, new animated welcome lighting greets the driver as they approach. A wireless mobile phone charger has been integrated into the centre console, new overhead USB ports are installed above the cockpit (great for dashcams) and a new Bang & Olufsen sound system rounds out the premium cabin. 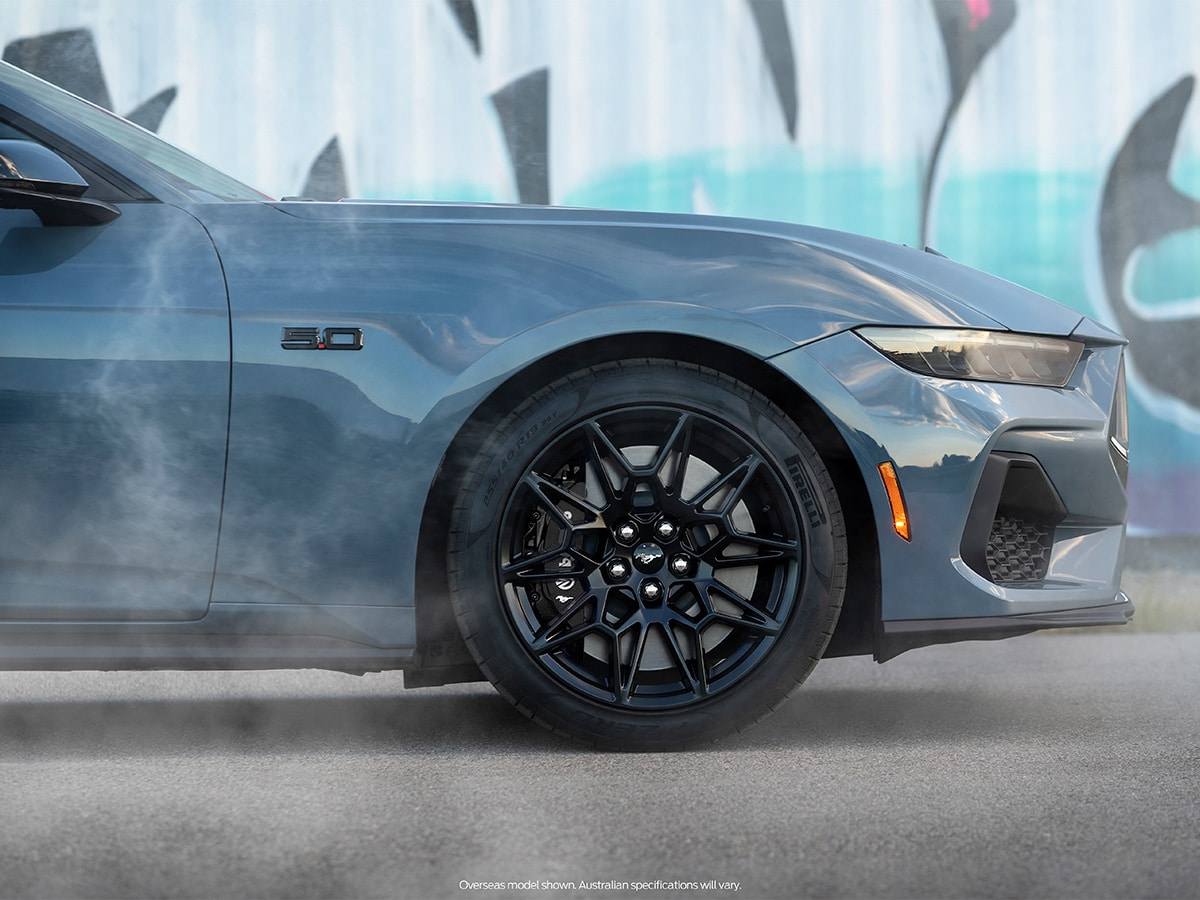 While the exterior design is ultimately more refine than redesign, we still love the look of the current generation Ford Mustang so you won’t find us complaining here. The idea to sculpt the roofline just right for easy helmet access is a game-changer for taller people like us and we particularly love the rear end angle with the extended rear spoiler module housing a signature tri-bar lighting design. The redesigned diffuser looks great and further improves aerodynamic balance in the rear.

Each model in the Mustang lineup carries its own unique front end. On the GT you’ll find larger, more aggressive grill openings, engineered to allow increased airflow, reflecting the increase in power and performance. And the aerodynamics continue onto the front end with the addition of new hood vents and redesigned front splitter.

“Both the EcoBoost and GT Mustang have unique styling cues that deliver on their promise of Mustang Performance,” said Christopher Walter, design manager, Mustang. “The new Mustang is more chiselled and edgier, leaning into Mustang’s classic brawniness and timelessness.” 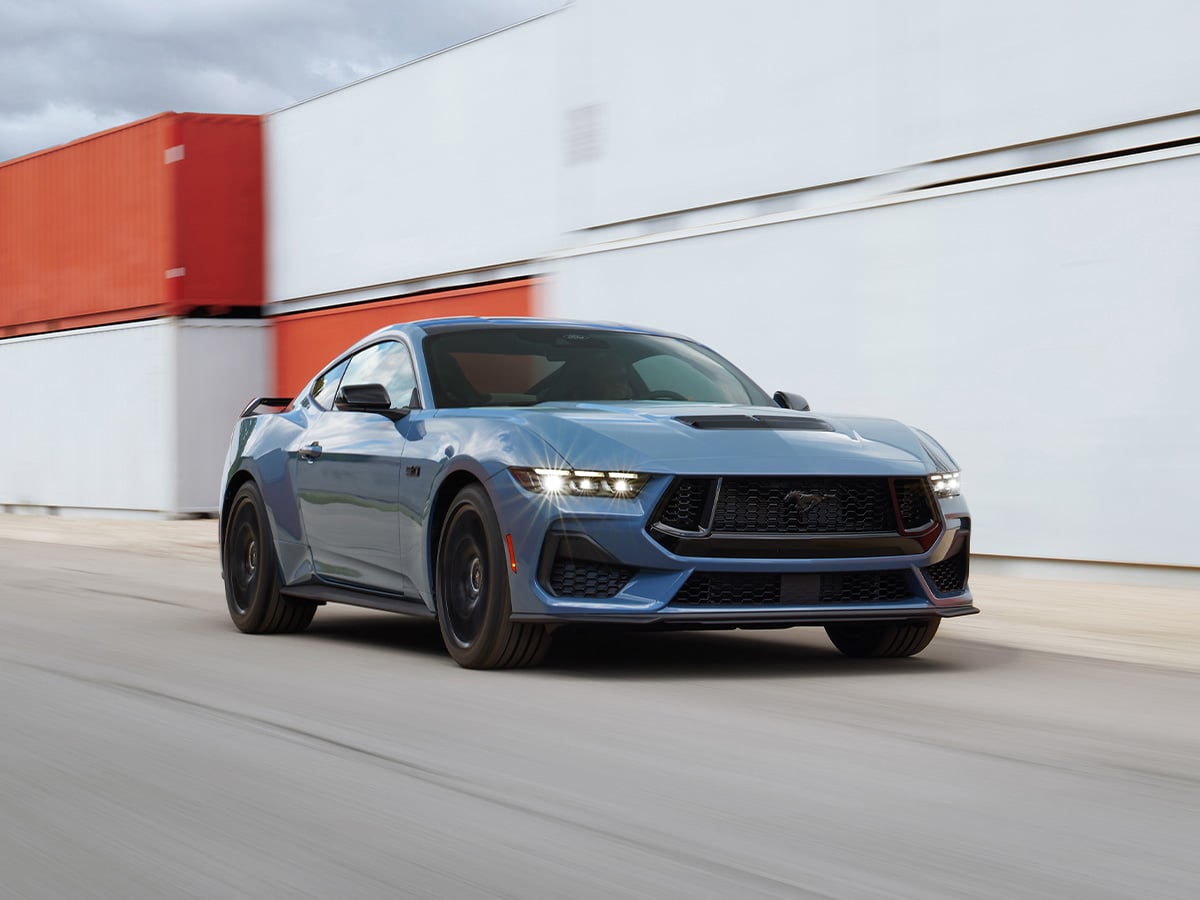 Sitting at the top of the consumer pecking order is the famous Mustang GT with Coyote V8 engine. The engine will return in its fourth generation and is set to deliver the most naturally aspirated horsepower of any Mustang GT, producing more than 480hp and backed by either a six-speed manual transmission or 10-speed automatic with reconfigured shift patterns to match the selected drive mode.

“This is the most athletic and confidence-inspiring Mustang EcoBoost and GT to drive yet,” said Ed Krenz, Mustang’s chief engineer. “Whether driving an automatic or manual transmission, thanks to drive modes combined with fine-tuned digital engine, suspension and steering controls, we’re now able to give drivers peak performance everywhere from their favourite roads to their local track.”

Six individual drive modes will be available to the driver of the 2024 Mustang, including Normal, Sport, Slippery, Drag, and Track plus a customisable setting with up to six individual profiles, tailored to the driver’s view ahead of them. As each mode is selected, high-fidelity graphics in the digital instrument panel bring the mode to life like a videogame.

There’s no substitute for the joy that heel and toe downshifting can offer, but artificial rev-matching is also included in the Mustang GT manual to hold RPM when the clutch is engaged to retain peak torque between manual gear changes. 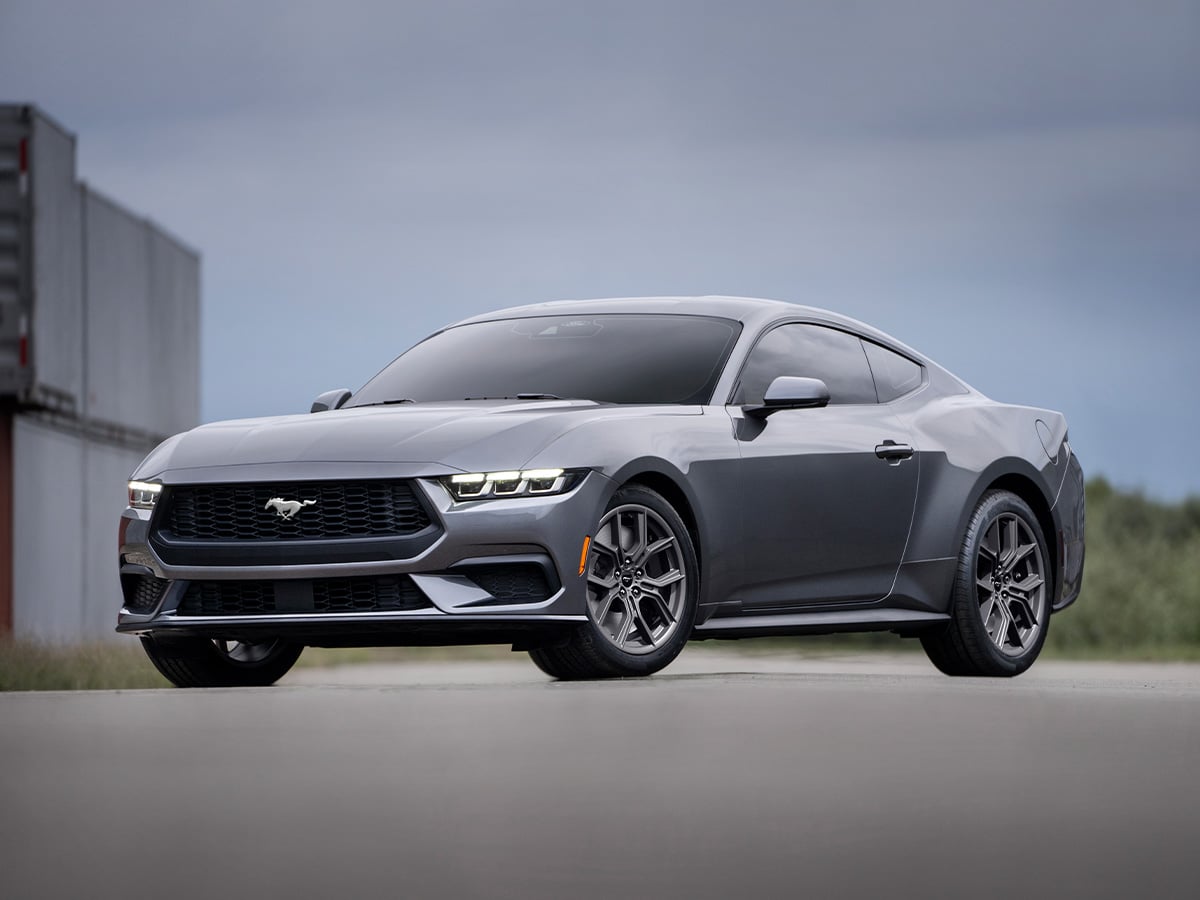 Power figures are yet to be revealed, but the 2024 Mustang Ecoboost will arrive with a new generation 2.3-litre turbocharged 4-cylinder eco-boost powerplant with power and performance figures to be revealed at a later date. The same six-speed manual transmission and 10-speed automatic will be offered to customers, and the engine option is designed for customers who desire Mustang’s fun-to-drive feeling with fuel efficiency benefits. 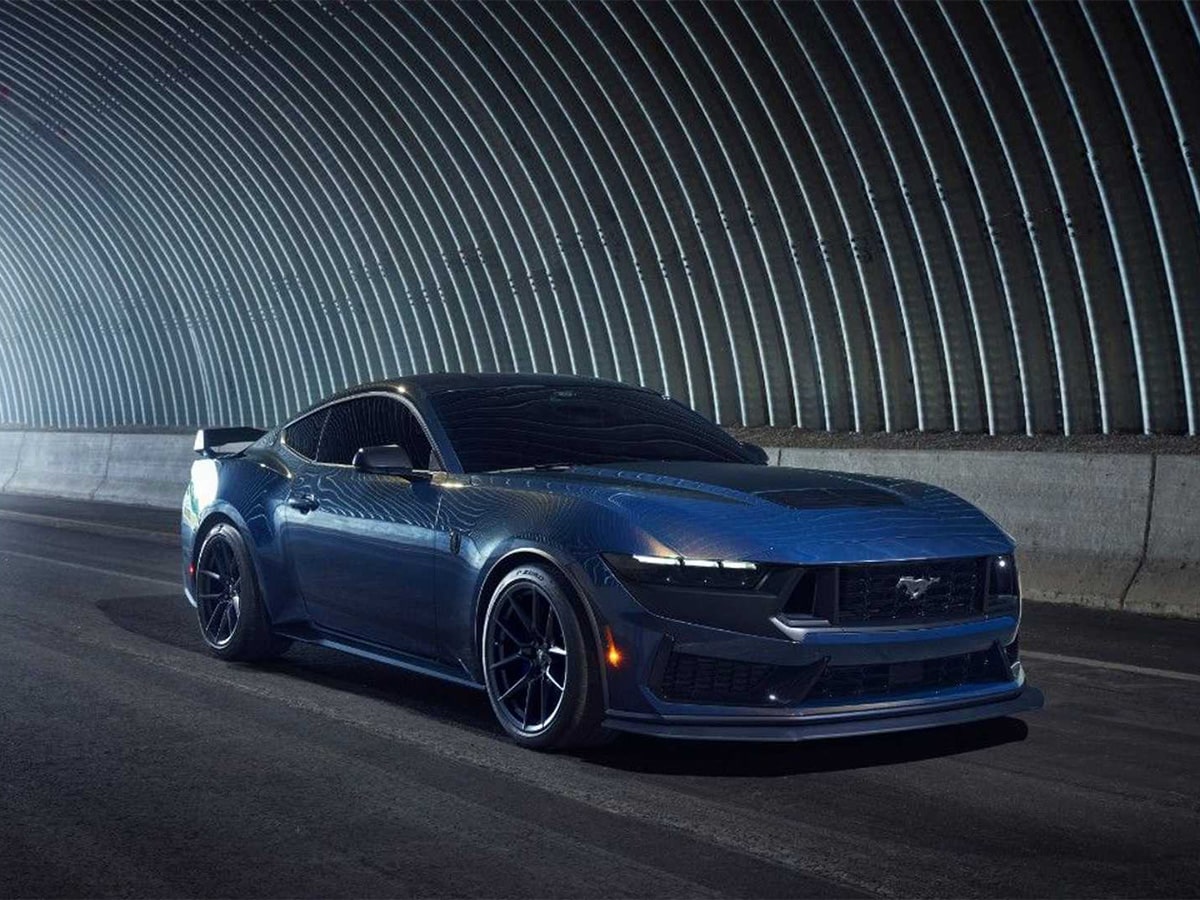 Ford Australia has confirmed that the 2024 Ford Mustang Dark Horse will arrive on Australian shores. And while the official power figures for all 2024 Mustangs are yet to be confirmed, the special edition Dark Horse will target 500HP or 373kW from its specially modified 5.0-litre naturally aspirated V8. Buyers can choose between the six-speed manual or 10-speed automatic transmission.

The special edition Mustang will be the only way to receive the Blue Ember colour for the exterior from the factory and you’ll find more blue in the cabin with seats and interior trim. Pony logos throughout the ‘Dark Horse’ will be replaced with a new Dark Horse logo.

Ford Australia has confirmed that the 2024 Ford Mustang will arrive in Australia from late 2023 with the Dark Horse special edition making its way Downunder. Expect exact model specifications, power, performance figures, pricing, and options to be revealed in the coming months. 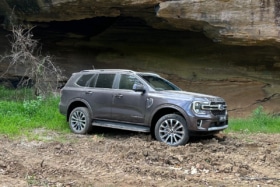