Amazing Race Australia 2019 contestants and psychiatric nurses Nick and Femi are launching Uncovered with Nick and Femi, a new podcast that tackles the serious issues surrounding mental health. The boys from Blacktown are sitting down with industry experts and celebrities to discuss their own experiences with mental health issues, be it personal or professional.

Early podcasts include interviews with radio personality and original Amazing Race winner Mel Grieg and the Hollywood Reporter himself, Richard Reid. Mel touches on the infamous Royal prank call and dealing with the depression and anxiety that followed. Richard speaks to being openly gay in the entertainment industry and how he’s dealt with mental illness.

The podcast will also feature stories from everyday people who have experienced mental illness. Expect to hear from those who have recovered from substance dependency, someone who experienced homelessness and mental health issues and a guest who lost a family member walks Nick and Femi through her grieving process.

On the launch of Uncovered with Nick and Femi, co-host Nick Evbuomwan says mental health is close to their hearts. “Given it’s been both of our careers, we’ve seen the devastating impact mental illness can bring to those suffering, as well as their loved ones.”

Femi Ogunsiji added that the plan is to create a platform so people can speak openly about mental health and remove the stigma. “Some of the stories you hear on the podcast will make you cry, while others will make you laugh,” he said.

“We want to help normalise some mental illnesses while raising important awareness for those more damaging ones.”

The first episodes of Uncovered with Nick and Femi are available now to stream on Apple and Spotify, watch on YouTube and find wherever else you get your podcasts. 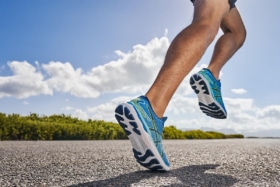 Fitness, Sneakers & Shoes
A Healthy Body is Your Key to a Healthy Mind

Advice
How to Support Men’s Mental Health, Outside of Growing a Moustache
load more articles