It’s that Mardi Gras time of year, and one way to celebrate is by diving into some of the best LGBTI movies to have ever graced our screens. Queer cinema has been one of the greatest forms of expression for the LGBTI community and delving into the backstories of some of our favourite gay characters is a great way for us to support, understand and most importantly enjoy everything LGBTI. Time to get your laptops out and get streaming.

Powerful, eye-opening and inclusivity, queer movies push the boundaries of representation in the best possible way. From comedies to dramas, queer cinema isn’t always an exploration of sexuality, either. The films on our list often tackle completely different plot-points and scenarios but are carried through by strong gay characters and those from the wider LGBTQI+ community. For example, a heist movie like Dog Day Afternoon might not be your obvious choice for queer cinema, but the film was a landmark release for representation in the trans-community. Whatever your creed or sexual orientation, these films are a reflection of modern life and should be appreciated for the art they are.

Here is a list of the best LGBTI movies you should watch at least once in your lifetime.

You’ll also like:
20 Romantic Movies on Netflix That Don’t Suck
42 Best Movies of 2020
20 Scariest Horror Movies of All Time According to Science

Moonlight is a journey. The film represents the complex navigation between our environment and the process of coming out. The main character, Chiron, is depicted at various stages of his life to explore the ongoing repression during his path of coming out as a young man living in Miami. This movie also won an Oscar for Best Picture, so it’s worth a watch!

The movie that solidified both Matthew McConaughey and Jared Leto as Hollywood elites, Dallas Buyers Club is a heart-wrenching and real tale of what it means to stand up for your rights. When Ron, a rodeo cowboy diagnosed with AIDS, discovers a banned drug that can help patients survive longer, he forms a club to smuggle the medicine to those in need. The acting performances are enormous, the dialogue stunning and the message, poignant.

One of our favourite comedy LGBTI movies, The Birdcage is still hilarious 25 years later. The film depicts a gay cabaret owner and his drag queen companion putting on a false front so their son can introduce them to his fiancée’s right-wing parents. It offers a poignant comment on the complex nature of navigating whether to cover up of embrace your queerness in a right-wing, straight world.

A timely Shakespearian adaption that seamlessly brought the New Queer Cinema movement into the mainstream. My Own Private Idaho is an independent adventure drama film starring two best friends that develop a love interest. It explores the difficult line between love and friendship in a creative and evocative way. Young Keanu and River Phoenix at their very best.

A true winner in the LGBTI movie hall of fame, The Adventures of Priscilla: Queen of the Desert is a rite of passage. Shamelessly Australian, two drag queens and a transgender woman travel across Australia to a cabaret gig in the hot town of Alice Springs. They learn about each other and shine a light on important queer tropes like drag, and is to be commended for its inclusion of a transgender role.

A movie about a bank heist that also offers insight into the world of being transgender. The main character, Sonny plans to use the stolen money for his lover’s gender confirmation surgery. The tenderness that the film enters upon learning the intention behind stealing the money shines a light on the importance of transgender people being able to accept their true self. Based on a real-life story, Dog Day Afternoon is one of the most heart-breaking and powerful LGBTI movies of all time.

A real and authentic representation of queerness and one of the best LGBTI movies celebrating queer love, A Single Man is one of our all-time favourites. Love and death come face to face as George wants to take his own life after the death of his lover. Fashion designer Tom Ford’s first feature-length film this release is a stunning adaption of Christopher Isherwood’s novel.

Call Me By Your Name is perhaps the most emotional, evocative representation of gay romance to grace our screens. It highlights the jagged line between friendship and deep love set against the stunning backdrop of the Italian countryside. The beautiful setting and raw depiction of the struggles we face in the complex navigation between what is love and what is friendship makes for a deeply beautiful and achingly painful film.

Director Todd Haynes transforms a cult novel into an iconic romantic drama. Carol is effortlessly seductive, following the journey of a young shopgirl falling for an alluring older woman. The passion is unspoken and speaks to the confusion queer people face when coming to terms with their bisexuality.

One of the greatest LGBTI movies to delve into the AIDS hysteria of the late 80s and 90s, Philadelphia explores homophobia in the workplace. The storyline follows a successful lawyer who is fired once they discover he has contracted the illness. Expect plenty of drama, emotion and inspiration as the film gives a much-needed voice to a marginalised community.

A little OTT, but we love it. Rocketman is the perfect movie idea if you’re looking for something light-hearted, fun and a true celebration of queerness. It may come as no surprise then when we say the movie is an Elton John biopic. Think glitter, music and some old razzle-dazzle, then repeat.

The life of gay men in the 1980s in New York City- what more is there to say? Longtime Companion is another timely exploration of the AIDS pandemic. The sympathy that is created by the dramatic portrayal of the characters accumulates in a moving, evocative conclusion.

A classic coming-of-the-age film and the perfect option if you’re looking for something uplifting. Exploring themes of being queer in high school, repressed sexuality and friendship, Handsome Devil shines a light on the beauty of difference and acceptance through an unlikely friendship.

A romantic drama for the ages, Desert Hearts is a fabulous adaption of the 1964 lesbian novel Desert of the Heart by Jane Rule. Incredibly nuanced, the film is one of the best LGBTI films that came out in the 80s. Expect sensuality, passion and love all in one narrative, as we follow the story of a woman in her 30s who suddenly realises where her love lies.

Heath Ledger stars in this romantic drama that truly is one of the best queer films of the new millennium. It follows the story of two men who fall deeply in love as the years go by. The film explores how we at times cannot articulate our love and therefore comments on loves mystery and irrationality. While it may have been seen as somewhat of a sideways step for Ledger and co-star Jake Gyllenhaal, Brokeback Mountain is filled with outstanding performances and stunning dialogue.

Happy Together comments on life as a member of the LGBTI community in the face of adversity. It speaks to the millions of people who feel their lives are at risk if they admit to their true identity and the consequent struggle so many people face to accept who they are. Expect heartache and a dose of adventure.

An impeccable biopic of the trials and successes of one of our favourite rock stars, Freddie Mercury. The movie seamlessly depicts the juxtaposition between the star’s success and his struggles with his ego, sexuality and illness. You’ll undoubtedly finish this film with a new perception of Freddie Mercury, a true gay icon.

Never cried from watching a film? If this is you, we dare you to give this film a go and then get back to us. Other People, a semi-autobiographical film accounts for the story of a struggling comedy writer after breaking up with his boyfriend and moving back home to help his sick mother. The touches of comedy make it a hilarious exploration of the struggle of reconciling our identity and our journey.

This one is for all the soppy teens out there- a cult queer-teen classic. In true high school style, a blackmailer threatens to reveal Simon’s sexuality which takes him on a journey of coming to terms with his true self. The perfect amount of romance, drama and comedy makes Love, Simon the ultimate a feel-good movie.

A troubled an aimless teenager that we can all relate to is the inspiration behind Beach Rats. A winner at the Sundance Film Festival, the film offers an interesting insight into our true self and the struggles we may face meeting this person. Harris Dickinson’s performance is almost wordless but just as beautiful, making this one of the best LGBTI movies of all time.

What are some good LGBTI movies to watch?

There are plenty of great LGBTI movies out there, our favourites are Call Me By Your Name and Bohemian Rhapsody. They are easy watching and emotional, making them easily enjoyed by everyone.

What are some queer movies to watch on Netflix?

Over the last few years, Netflix has certainly elevated its queer cinema content. Our favourite queer movies on Netflix are Other People and Beach Rats.

What is Moonlight about?

Moonlight is about the coming out journey of a young man named Chiron living in Miami. A heart-wrenching exploration of self, the film captures issues of race, identity and sexuality all at once.

You’ll also like:
20 Romantic Movies on Netflix That Don’t Suck
42 Best Movies of 2020
20 Scariest Horror Movies of All Time According to Science 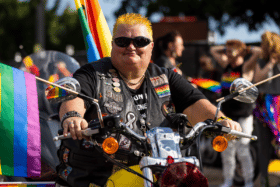