Losing your hair can be an incredibly stressful time for a lot of guys. From someone who’s forehead is getting bigger by the day with a receding hairline, I totally understand how it feels. Friendly ridicule and jibes from your mates  doesn’t help either and often checking out your thinning scalp in the mirror can bring on moments of panic not knowing what to do next. While it’s something practically all men go through at some stage of their lives it’s a very personal experience and some handle it better than others. So if your someone who is greatly stressed by it, the good news is that there are plenty of things you can do to slow or in some cases stop the loss of your hair.

Don’t get us wrong. There’s ABSOLUTELY nothing wrong going bald or thinning hair. When cultivated properly, the bald or shaved head look is as poignant as any other style. One thing to realise is no one really cares about what you’re hairline looks like other than yourself. Think about how much notice you take of someone else’s hairline. None? Yeah so don’t worry about yours either. But if you’re still freaking out, stress less. This article is to help you feel more comfortable in your own skin.

There are a few reasons you might be losing your hair and a lot of it is hereditary. Some recent ancestor (probably your mother’s father) of yours lost his hair because some ancestor of his lost his hair and now you get to lose your hair. More specifically, you’ve probably inherited an increased level of DHT, aka dihydrotestosterone. DHT is an androgen hormone that’s five times more powerful than testosterone. It’s produced in the testicles and plays a major role in the development of one’s family jewels and furthermore gives males their masculine traits. Therefore DHT is not only responsible for the hair that’s disappearing where you want it the most, it’s also responsible for the hair growing in the places you want it the least. So for those of you with high testosterone levels, are likely to have higher levels of DHT.

The most common and effective medication used to combat hair loss is Minoxidil. Minoxidil was initially explored as a failed potential cure for ulcers in the 1950s. After being synthesised into over 200 different compounds it was then used as a failed potential treatment for hypertension. Meanwhile, an unusual amount of hair began to grow on the test subjects. Voila! It’s now the main ingredient found in the ever popular Rogaine and many of the products we’ve listed for you below. Hair growth topical treatment was born, which just goes to show that every time one door closes another one opens (or however that saying goes). 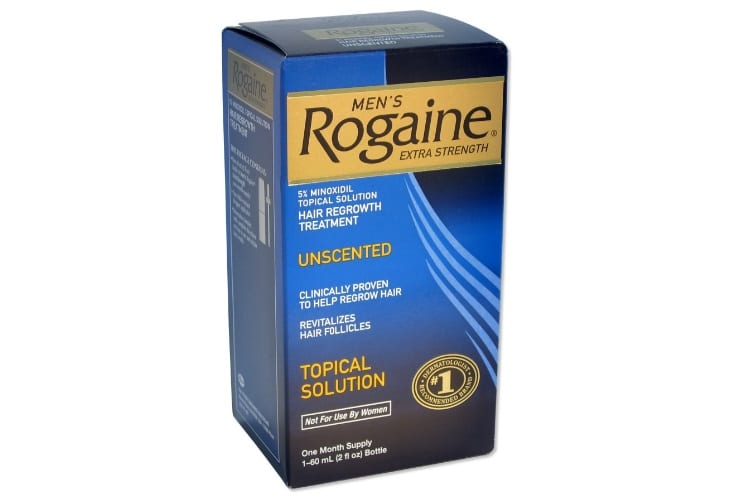 To this day, doctors don’t quite fully understand how Minoxidil works (the current theory is that it expands blood vessels and opens potassium channels allowing for an improved flow of nutrients, blood and oxygen to the follicle), but nevertheless it has been deemed safe and effective enough to be sold over the counter. Hence, should you go seeking serious treatment for your male pattern baldness you will possibly end up using some form of Minoxidil or some Minoxidil clone. There are also other oral medications like Finasteride but best speak to your doctor first about taking anything that messes with your hormones.

As with every cure or treatment, there can be some side-effects. In the case of Minoxidil, it’s likely you’ll experience some initial shedding of your unhealthy hair before the new hairs take root and can take up to 3 months before you’ll start to see a result. Many guys freak out about the shedding and stop the treatment before they’ve seen any benefit only to be left in a worse position than they started in. So as we stated in the disclaimer above, we aren’t prescribing the following products nor promising they will work. But if you simply must fight off the increased levels of DHT inherited from grandpa, make sure you speak to your doctor first and consider checking out the 6 products listed below. 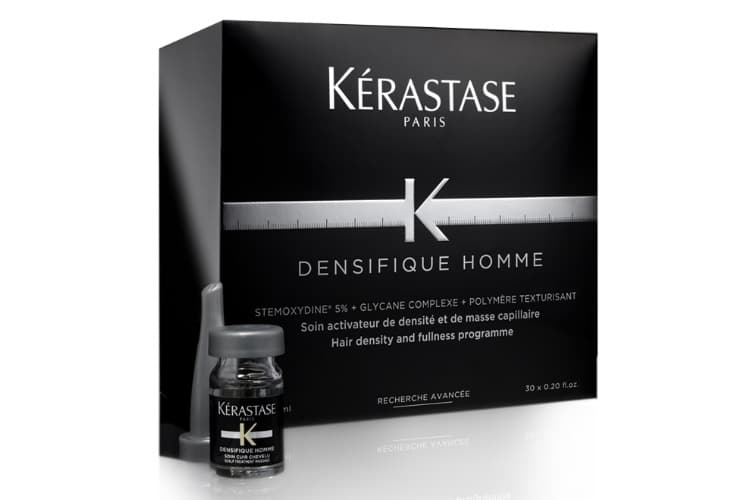 “Densifique” does kind of sound like a really fancy way of saying “dense”, doesn’t it? It’s probably French, which makes sense because we can totally picture French men doing whatever it takes to prevent baldness. In any case, slather this product over your skull to maintain a thick, full head of hair and even enhance texture. Densifique will give those follicles a nice full glow and in addition a lush boost to your overall profile from the forehead up. 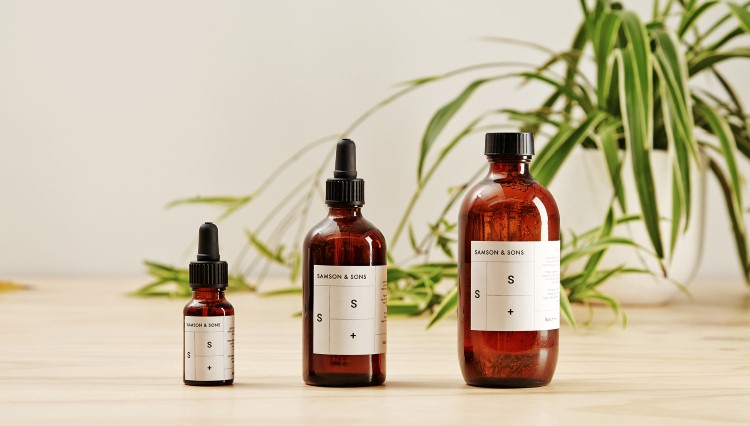 Samson & Sons operates by taking a no-nonsense approach to hair science and discretion. They advertise the fact that “hair loss” is never mentioned in any of their products. Their lotion–which contains 5% Minoxidil–is FDA approved and clinically proven to prevent male pattern baldness on 4 out of 5 heads. The lotion also comes in cool holistic looking bottles. Samson & Sons doesn’t aim for re-growth, rather the prevention of further hair loss so time is the most critical factor in terms of making the product work. Expect to see results in 3-4 months after beginning treatment. The good news is that the bottles look so good and trendy you won’t have to hide them away at the back of the bathroom cabinet. 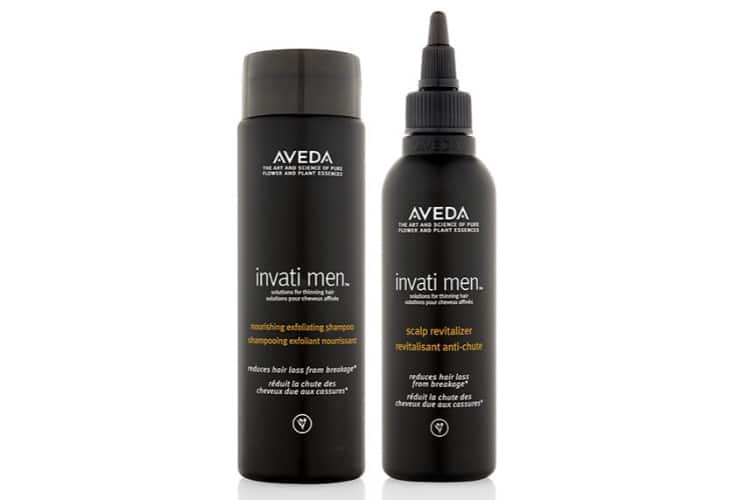 Since you’re obviously concerned about your appearance, odds are you take a shower every now and then. Aveda asks you to throw some of their Invati Scalp Revitalizer Shampoo into the mix to reduce hair loss and increase hair thickness. Invati uses a slew of ingredients to make their magic happen and we didn’t see Minoxidil among them, but plenty of customers swear by the product and it doubles as a shampoo so there’s probably no harm in trying it out. It does incorporate flower essences as well as turmeric and ginseng to energize the scalp and get those follicles flowing. Plus, it’s safe to say that Aveda knows a thing or two about hair. 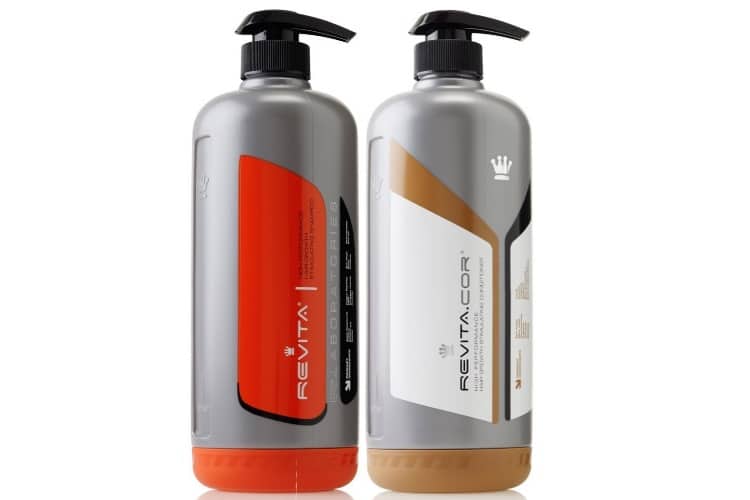 DS Labs might sound like a place of extreme chemical experimentation but their hair loss prevention shampoo promotes itself as a high-end natural solution to a common problem. It doesn’t use sodium laureth sulfate or other known low-grade chemicals that are frequently affiliated with scalp irritation. By contrast, Revita employs tried and true ingredients with the pure intent of hydrating and nourishing the hair and scalp to support texture and restoration. I’ve used this personally and can stand by it giving your hair a denser and thicker look throughout the day. If you’re simply looking to give the appearance of thicker or denser hair you should consider L’Oreal’s new Serioxyl Hair Serums. The Denser Hair serum for the scalp and hair is enriched with Stemoxydine which is meant to leave your hair looking denser and feeling fuller. Stemoxydine has a completely different structure from minoxidil and is patented by L’Oreal. L’Oreal claims that the liquid, when applied to the roots, can promote the growth of more than 1500 new hairs in 90 days. The study was conducted in a double-blind vs placebo study consisting of 101 men between 18 and 55 years old. During the study, subjects applied stemoxydine 5% solution (or stemoxydine 5) once a day (6ml). The Thicker Hair Serum for the fibre is enriched with a combination of Intra-Cylan and Incell, giving an instant thicker feel on the hair. 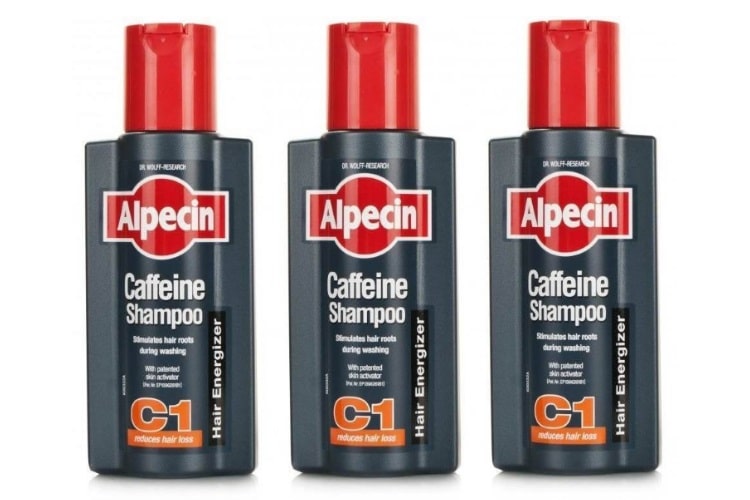 Like other entries on this list, German brand Alpecin is definitely not afraid to think outside of the Minoxidil box when it comes to hair treatment. Based on the results of numerous clinical studies, Alpecin has determined that caffeine is a truly effective ingredient in the battle against hair loss. Apparently, caffeine works by protecting the follicle at the root against increased levels of DHT and providing the hair with the same sense of motivation and energy that a great cup of coffee gives to your brain each morning. The powerful caffeine remains in the hair long after you’ve washed out the shampoo so your roots stay reinforced and combative against DHT all day long. So does it work? Well, try it out and let us know.

In spite of our list above, we just want to reiterate that there are plenty of more important things to worry about in life other than hair loss. Not only is male pattern baldness incredibly common, it can be a statement of personality and style in its own right. However, should you go on the hunt for preventive treatment, you definitely want to begin as soon as you notice that hairline receding as opposed to when those rays of sunlight begin bouncing off your bald head. Should the medication work, great! If not, we suggest turning your interest onto more important matters like your overall physical and mental health.

For more haircare, hair styling and grooming tips, stay subscribed to Man of Many.

Featured
New On Netflix in August 2020
Advice
What are Non-Essential Services? Australia's Work Restrictions Explained
Competitions
WIN! The Theragun Elite in White Worth $649!