There are already too many podcasts out there, but if you decide that the world needs another, the HyperX QuadCast S microphone is a great place to start. The same goes for budding game streamers seeking professional-grade audio equipment for a DIY studio.

With an RRP of AU$299, there are certainly cheaper microphones available. Still, few boast the premium build, audio patterns and RBG effects of the QuadCast S. Plus, you might find it hard to build an online following with sub-par audio. Instead, make a checklist of desired features, and this gaming microphone will tick most if not all the boxes. So, let’s take a closer look: 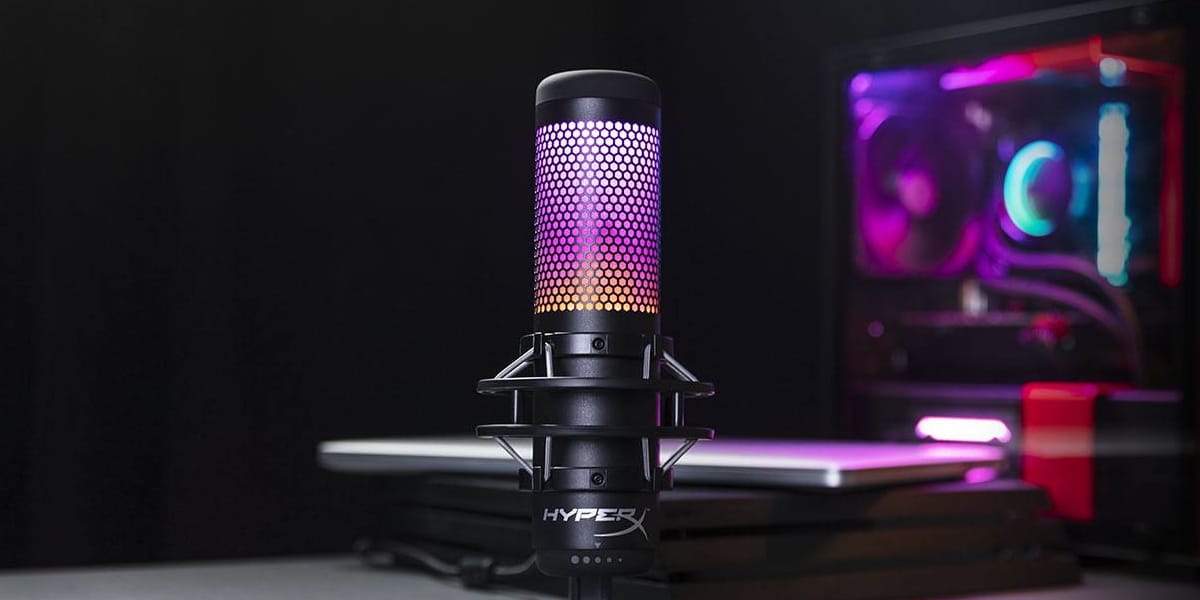 HyperX QuadCast S is a gorgeous microphone that’s equal parts professional and gamey. The dynamic RGB lighting is what gives this otherwise matte black microphone its gamer appeal. Beneath the metal grille, the colours swirl and dance while you record and stream. QuadCast S should look right at home alongside the RGB keyboard, mouse, mousepad, headset and every other peripheral that doubles as a light show.

The LEDs can be switched off using the supported software, but that would defeat the point of purchasing an RGB microphone.

The cylindrical mic features a durable metal casing that’s mounted to a stand with a grey bungee cord. This reduces the likelihood of bumps and desktop vibrations affecting a recording. Unfortunately, the shock mount can’t be removed, which limits portability. An adapter is included in the box for attaching the mic to a boom stand for added flexibility.

Beneath the grille, HyperX surrounded the microphone with a subtle pop filter. Having one built-in is a great inclusion, as there’s no need to purchase an accessory to limit unwanted sounds from a recording.

The entire top of the microphone functions as one big Mute button. This sensitive surface can be tapped with ease, and the lighting effects switch off to signify the recording is muted. Press the top again to jump back in on the action. 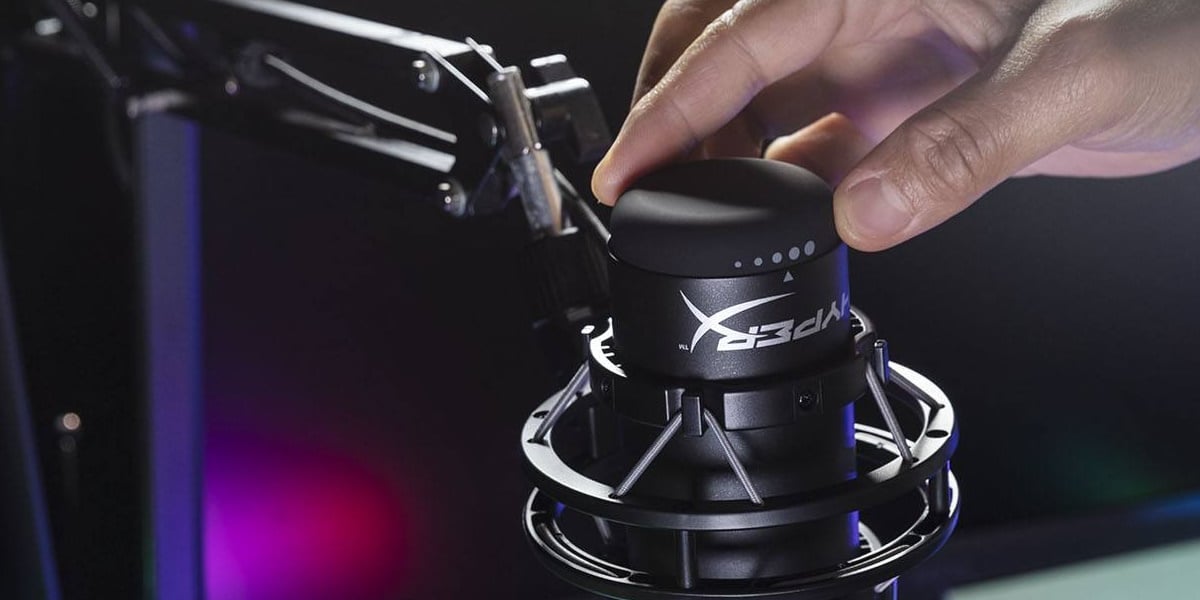 The bottom houses a large dial quickly adjusting microphone gain (sensitivity). There’s also another smaller dial at the rear for switching between stereo, omnidirectional, cardioid and bidirectional stream/recording configurations. We’ll talk more about this in Performance.

Hidden behind the built-in stand is where you plug the lengthy, detachable USB Type-C cable to power the microphone. Above is a 3.5mm audio input for connecting headphones, so you can directly monitor the recording or live stream.

With the QuadCast S, HyperX has designed a mic that will elevate the professionalism of any gaming desktop or growing studio. Now, let’s take a look at specs and performance. The issue with the bidirectional pattern was that the front of the microphone produced louder volumes than the rear during playback and while mic monitoring with headphones. As a result, during our tests, one user had to sit slightly closer to the microphone or speak louder to achieve a similar volume to the other user.

You will also need to switch patterns depending on your goals. Each pattern is referred to by symbols on the dial, with the legend found in the box and manual.

Up close, the representation of voices is pleasant, although the microphone does pick up ambient noise, particularly low pitches. During further tests of each mode, I would pick up the sounds of the downstairs rangehood while the kid’s TV shows were blocked out, despite the TV being the louder of the two. 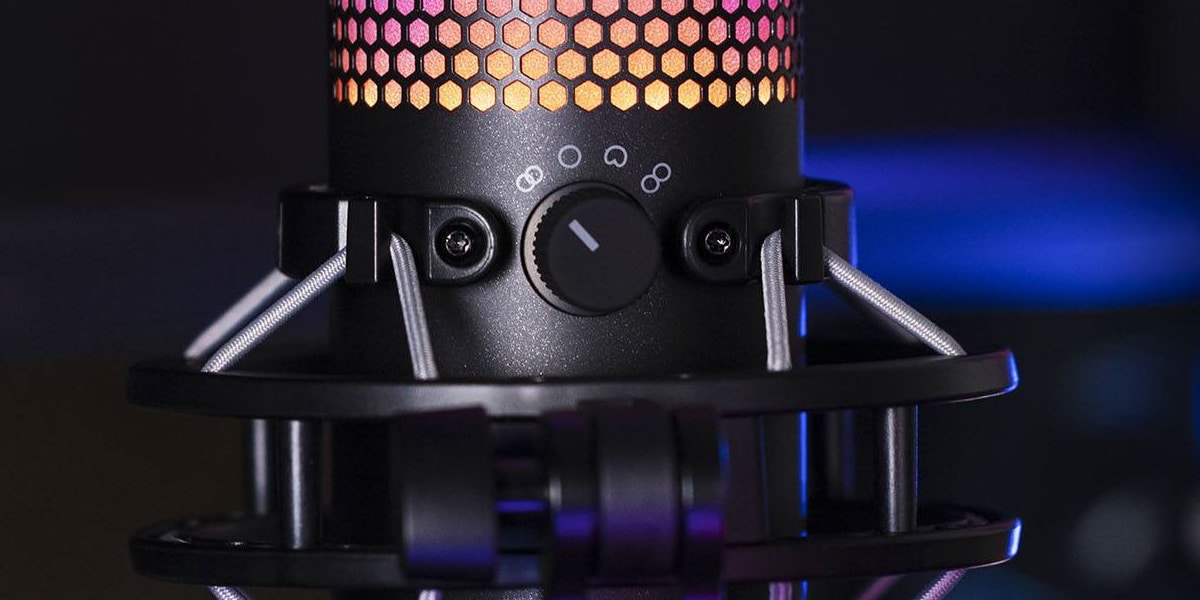 This is not a complaint but rather a compliment of the gain achievable by the microphone. I turned the dial at the base of the mic to reduce sensitivity, and it blocked out all of the unwanted noises. Of course, quieter environments are always preferable but maybe not be achievable in work from home scenarios.

The built-in pop-filter also works a treat. It helps reduce the ‘pops’ that come with pronouncing B’s, P’s and other overbearing sounds. In addition, QuadCast S is certified by Discord and TeamSpeak, which essentially means that these leading brands approve of the microphone’s performance.

Overall I was very impressed with the quality of audio captured. The HyperX QuadCast S will come in useful if we ever launch a Man of Many podcast.

Download the free HyperX NGENUITY software to access options for customising mic volume, mic monitoring your recording and headphone volume. You can also customise lighting effects, including colour, speed and pattern and save profiles. The software can also be used to edit lighting and performance for other HyperX peripherals, including the brand’s keyboards and gaming mice.

What’s disappointing is that NGENUITY is only compatible with PC. There’s nothing you can do about personalising these features if you’re using the QuadCast S for PS5, PS4 or MAC. The software is still in beta, so further features may be added at a later date. 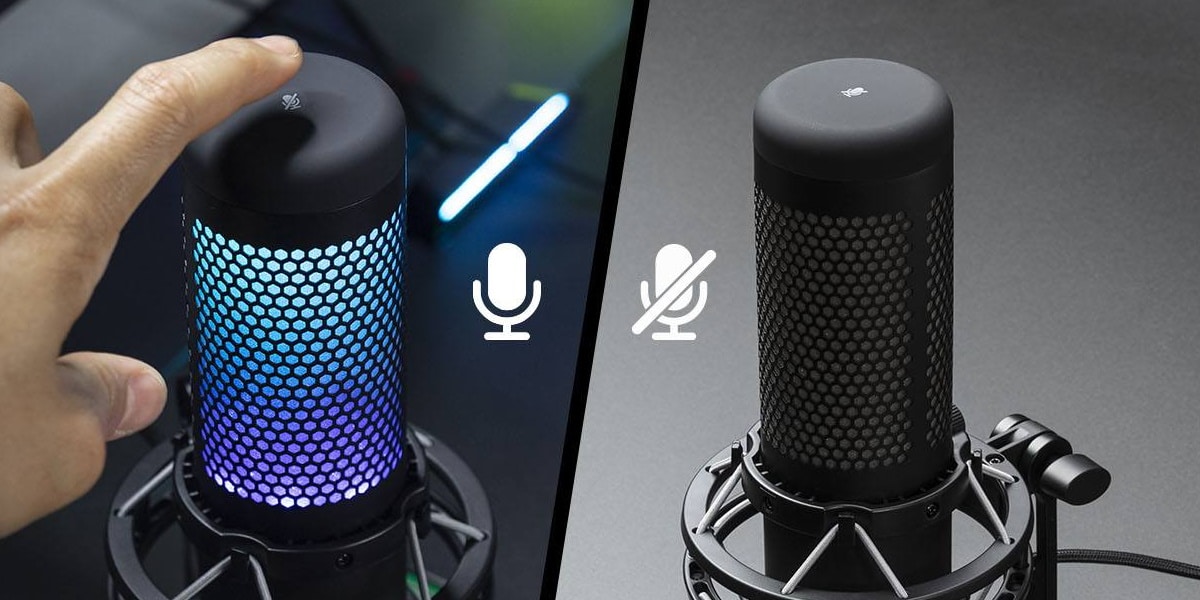 Lastly, we should compare the QuadCast S to the lower-tiered QuadCast microphone. For around $70 – $100 less, you can pick up the HyperX Quadcast, which has the same audio performance as the S but features a Micro USB connection, and the lighting effects are limited to a red hue. This more affordable model might be preferable to those podcasting or streaming on a tight budget.

Ultimately, there’s a lot to like about the HyperX Quadcast S. The microphone looks and feels premium, with quality audio performance that can help lift your stream or podcast to the next level. It’s true; we experienced a minor issue with the bidirectional pattern, but the workaround was simple and no trouble at all.

The price is a more concerning factor. At RRP AU $299, the mic may fall outside the budget of those looking to get their channel off the ground. However, should you decide to invest, QuadCast S is a reliable solution that can help you grow for years to come – even if there are already too many podcasts.

Does HyperX QuadCast S work with PS5 and PS4?

Yes, it does. Plug the microphone into the PlayStation's USB port, and the console will automatically switch to the QuadCast S as the default microphone. Unfortunately, you cannot tweak settings and customise RGB lighting without connecting to a PC and downloading supported software.

What’s the difference between HyperX QuadCast and QuadCast S?

The main difference is price. You can pick up the QuadCast for $70 - $100 less than the QuadCast S, and you will receive the same audio performance. However, you sacrifice customisable RGB lighting and receive a Micro USB port instead of a Type-C connection.

Can you turn off the QuadCast S RGB lighting effects?

Absolutely. Download the HyperX NGENUITY software, then connect the microphone to a PC, and you can switch off the RGB lighting. You can also customise colours, patterns and adjust audio settings for the microphone. Alternatively, the big button on top of the QuadCast S switches off lighting effects but also pauses the audio.