There are few mixed martial artists who are worthy of GOAT status. Jon Jones, Georges St-Pierre, Khabib Nurmagomedov & Henry Cejudo are just the fabled few that come to mind. And now, Alexander Volkanovski is in that mix. At UFC 273, the Australian featherweight fighter finished The Korean Zombie in a ‘phenomenal’ fashion to extend his win streak to 21, and 11-0 in the UFC, to remain the undisputed champion of his division. 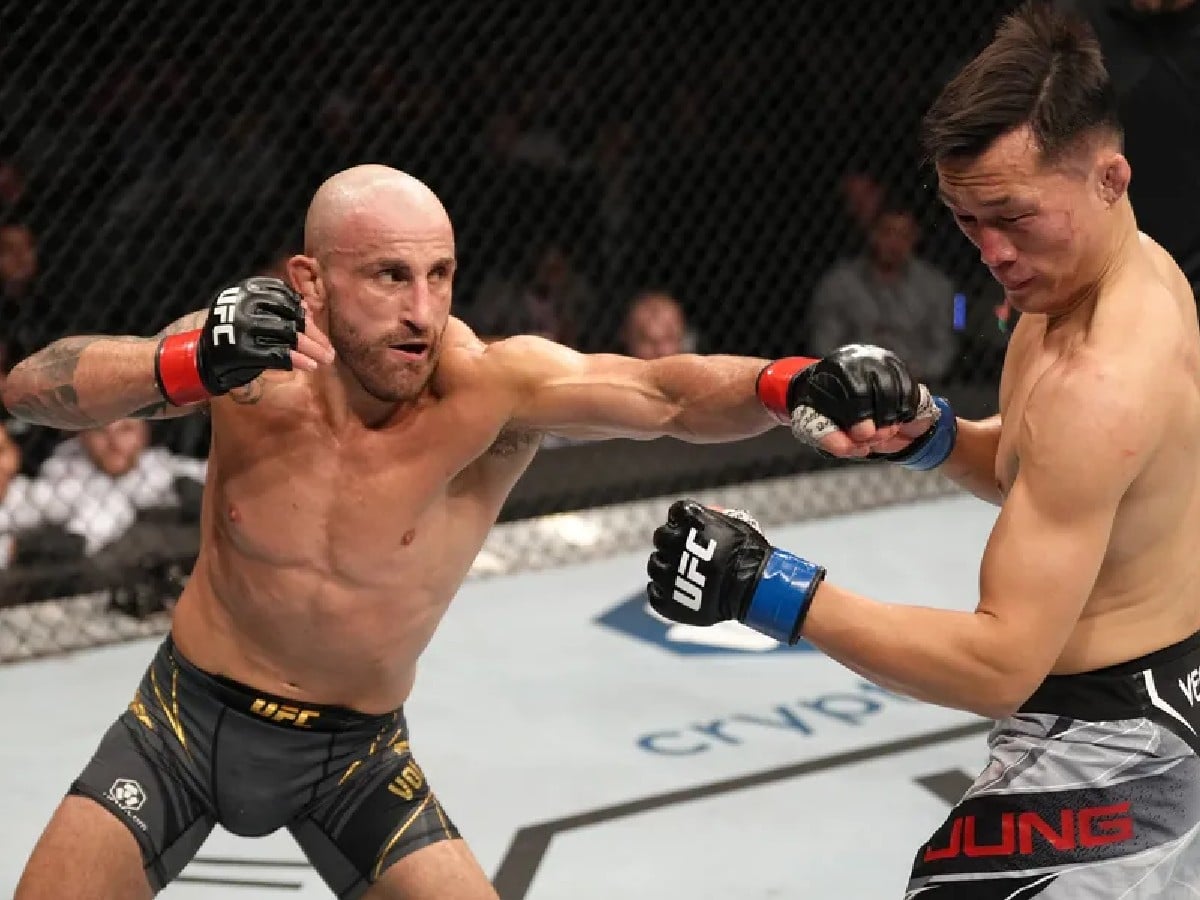 Meanwhile in the co-main event, Aljamain Sterling put on an impressive performance to prove to the fight world that he’s befitting of the bantamweight belt he won via disqualification a year earlier. And the bout that hadn’t seen fight fans this hyped since McGregor graced the octagon was when Khamzat Chimaev smeshed number two welterweight Gilbert Burns to remain undefeated. It was so good, it stole the spotlight from both title fights, won the Fight of the Night, and perhaps will score the Fight of the Year, as UFC boss Dana White put it.

His strength, stamina and fight IQ are second to none in the division. Everything was in check for Alexander ‘The Great’ Volkanovski when facing Jung ‘The Korean Zombie’ Chan-sung. With a mutuality of respect between the featherweights, the opening rounds saw many low leg kicks, generous punches by both mixed martial artists, a bit of phone-booth fighting and a knockdown by Volkanovski that crippled his opponent — picture perfect.

The second and third rounds showed a more refined Volkanovski when he landed some takedowns and pressed on after being struck by a flurry of jabs. The South Korean continued to muster some fine cheques and jabs but was fatiguing and bloodied before being floored by a massive right hand and saved by the bell. In the fourth round, all it took was some slugs by the champ before referee Herb Dean wisely threw in the towel for the South Korean, earning the Australian a fourth-round knockout win.

Volkanovski wowed the world and judges with his footwork, composure and speed. His M.O and durability stand to reason why he’s The Great and a cut above all featherweights. In his post-fight interview, Volkanovski said to Joe Rogan: “Mate, I told youse before this fight all week, I said I’m on another level right now. I can’t be stopped, and I just showed youse… Everyone in my division, I’ve been saying it for a while now, get you’re s–t together, earn that number one spot and you get it. If not, you gonna miss out.”

Funk Master has ‘No Mercy’ for Petr Yan

Since the controversial ending to the first championship bout, interim champion Petr ‘No Mercy’ Yan waited 13 months for finality, and it all hinged on the first round of this fight. With all the emotion at play for the Russian, Aljamain ‘The Funk Master’ Sterling made great use of the language barrier to peeve his opponent and woo over the arena during the pre-fight press conference.

Teeing off the championship bout with a promising start, the bantamweights appeared to be more cautious and calculated in the second meeting by keeping their distance and picking their shots. While Yan worked his hands and maintained his composure with his patented high-guard, Sterling kept a tad more distant, wielded many leg kicks and made his vindictive opponent chase him a bit; he even had two unsuccessful takedown attempts. Rounds two and three were The Funk Master‘s. Sterling successfully dismantled the Russian and had him in a body triangle, from the back, by the side of the cage until the bell. Yan did make some defensive and offensive mistakes but nothing too series for a submission attempt. But the Russian came out guns blazing in the fourth and final rounds. After some clean punches and an attempted takedown that backfired for the American, he had him downed for a mild ground-and-pound. The final 5-minutes of the bout ended with Yan on the back of his opponent having definitively banked the round after landing many punches, kicks, a takedown (I think?) and a knee to the face. Nonetheless, a split-decision win for The Funk Master and the Russian couldn’t have been more gutted.

Every now and then, an athlete comes to a sport and captivates the world, and for MMA, that happens to Khamzat Chimaev. During the 15-minute war, Gilbert Burns went toe-to-toe with Borz for an exchange of brutal shots in what was The Fight of the Night. Since The Leech‘s plan of finishing the Brazilian in the first round didn’t come to fruition, he gave credit to his opponent for putting up a good fight and elaborated on the need to be ‘smarter’ next time around. Burns is now the first fighter to go the distance with Chimaev and even score one round in favour of the judges.

Prior to the bout, MMA buffs touted Chimaev to be the next Khabib Nurmagomedov. But after being cut, bloodied and wobbled by many power shots, it showed that The Eagle is  worlds ahead of any fighter. In a TMZ interview, and later in the post-fight press conference, Dana White suggested a match-up between Colby Covington and Chimaev to be a ‘big fight’ for fans and on the horizon.