They say a classic never dies, and a short trip around Australia’s most recognisable city is a testament to that. A sprawling urban metropolis, Sydney is lined with high-rise architecture that melds contemporary design with heritage charm. From the bustling inner-city streets that twist nonsensically through the Harbour town, to the sweeping southern outskirts, Sydney has provided us with the perfect backdrop for our most iconic landmarks.

But once you dive deep into what gives the city its trademark aesthetic, it’s the blend of timeless style and modern design that sits paramount. It’s true, what is stylish hasn’t really changed, merely the way that we express it. It’s a similar story for Toyota, the iconic automotive company released its GR Supra in late 2019.

Fusing signature Supra style with modern design aesthetic, the latest Supra mirrors the Sydney skyline with the same thought-provoking charm the city’s tallest residents exhibit. We took the new Supra on an exploration of Australia’s busiest city, capturing it in all its architectural glory.

Sydney’s youngest urban playground, Barangaroo is the perfect embodiment of old meets new. The banks of the Barangaroo Reserve bear the marking of the 1836 edge, uniquely showcased against the accompanying sandstone block foundations, but just metres from the edge is a concrete and glass urban oasis. Thick, black panelling provides a matte surface where light is unable to be refracted, accentuating the matte white, concrete structures that enclose Barangaroo’s buildings. It’s a sleek parallel to the sharp cuts and lower structures of the GR Supra’s striking matte black wheels. The Supra’s sculpted front-end is punctuated by the signature two-level, six-lens LED light cluster. The fierce aesthetic tapers off as it rises, to reveal a smooth upper layer that starkly contrasts the rigid cuts beneath. 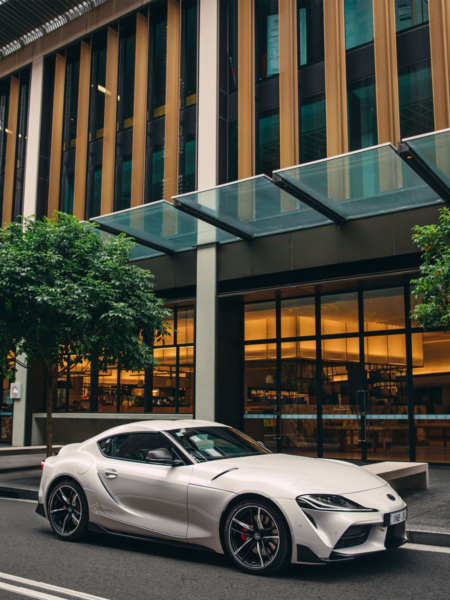 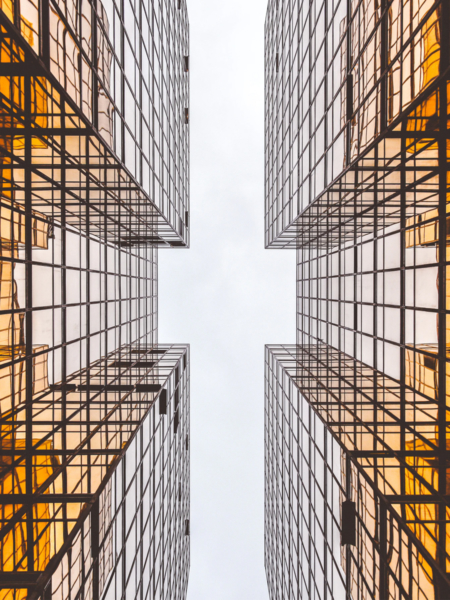 Like the buildings around Barangaroo, the GR Supra is highlighted by sharp vertical lines that provide the illusion of length. The rear sitting cabin and elongated front maintain the traditional sports car shape, albeit with a distinctly Supra silhouette.

Great design isn’t just looking pretty, though. In fact, the true essence of design is art with purpose, and it is balance that brings everything together. You can see it in the symmetry that binds the Harbour Bridge, and you can see it in the GR Supra’s lower-half. Toyota matched a precisely calculated wheelbase to an ultra-wide track width to create what its engineers refer to as the ‘Golden Ratio’. Like a fine piece of architecture, every element within the GR Supra has its place, bringing a sense of equilibrium that John Bradfield would be envious of. 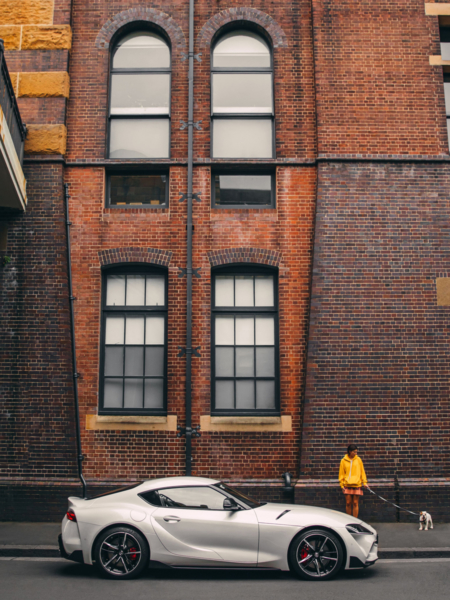 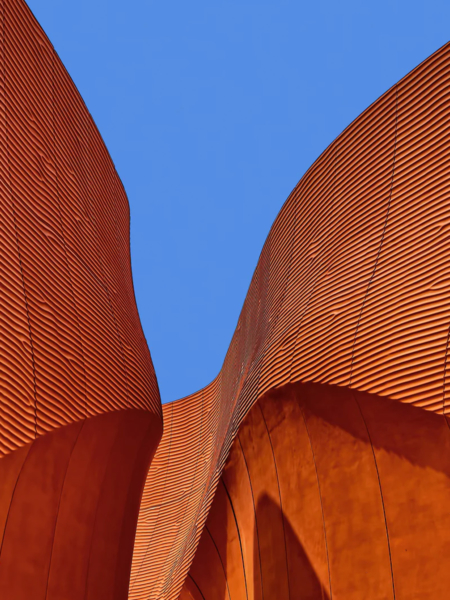 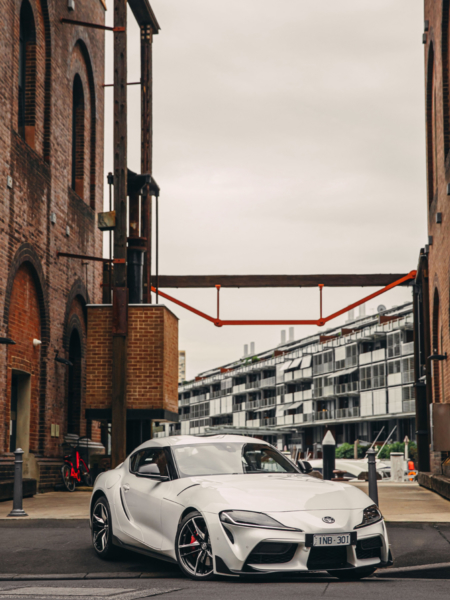 We travelled down the iconic Sydney streetscape to Sydney’s oldest suburb, The Rocks. Home to some of the best-preserved colonial architecture on the planet, The Rocks’ amber patchwork bricks and chamber windows call back to the days when this region was renowned for its ship-building heritage and forged iron construction. But now it’s a new forged alloy that is stealing the show. The GR Supra’s 19-inch wheels are constructed from forged aluminium, offering lighter weight, greater strength and performance.

It isn’t all sharp lines and rigid strokes that highlight the GR Supra’s aesthetic, however. The sloping curves of the new Toyota‘s rear headlights speak to the vehicle’s sleek, subtle sophistication. From a heritage perspective, the latest addition doesn’t shy away from its racing pedigree. In fact, so strong is the Supra’s motorsport connection, that its very logo is inspired by the Wehrseifen section of the legendary Nürburgring racetrack. 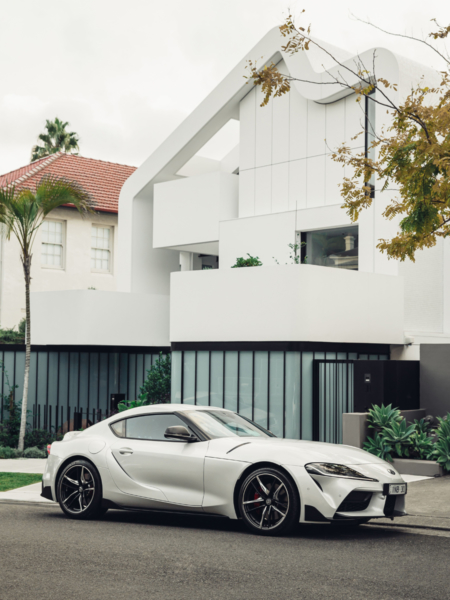 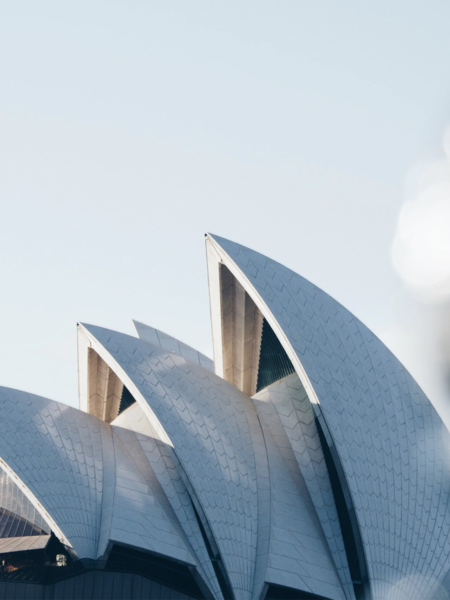 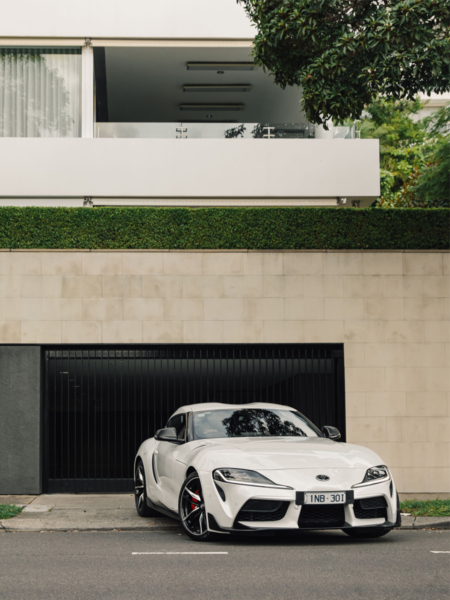 Taking the GR Supra on a cruise past the Prime Minister’s residence in Kirribilli, we couldn’t help but notice a striking sense of familiarity. The region gives an unimpeded view of arguably our most famous landmark, the Sydney Harbour Bridge. Two iron curves rise delicately from below to create the awesome structure, not unlike the double-bubble roof that Toyota has rolled out for the GR Supra. The subtle rise exemplifies the key principles of Bauhaus design, with form following function. Both structures were implemented to allow for greater air flow and reduced drag, a key component in improving safety on the road and beneath it.

This perfect weight balance is the hallmark of true success, in design and functionality. Like the massive steel structure it sits in front of, the GR Supra has been constructed in keeping with the principles of form. Toyota dropped the engine and transmission as low as possible to maintain a shallow centre of gravity, keeping the weight of the car perfectly balanced, as all things should be. 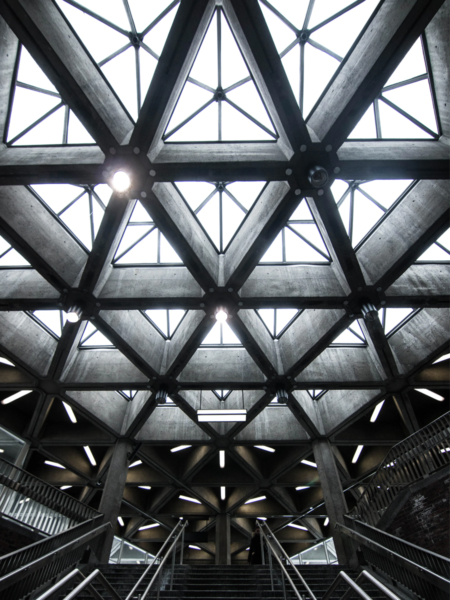 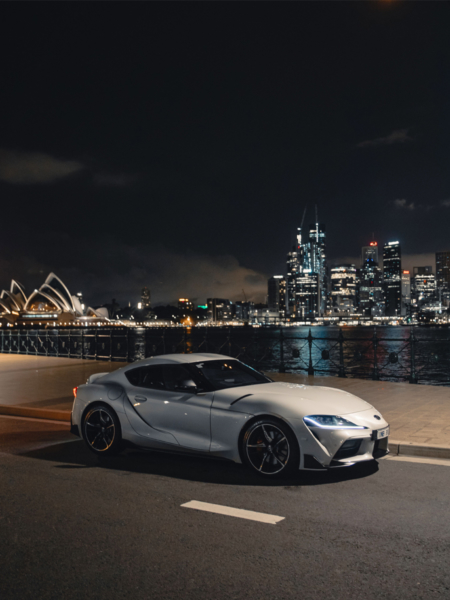 Everybody remembers the first time they saw Brian O’Conner’s burnt orange Toyota Supra gliding through the Los Angeles hills in the first Fast and the Furious film. The high-octane opening kickstarted a new era for street performance that Toyota was more than happy to take the lead on. Nearly 20 years on from that iconic film, the Supra is still turning heads, albeit in a far more refined and balanced manner.