Whether you are a certified junkie or you’re still in the ‘qwin-o-ah’ stages, you can’t deny quinoa is everywhere nowadays. Head down to your local cafe and try to cop a salad that isn’t laden with the sticky brown grain, chances are you’ll be out of luck. But the rapid rise of quinoa isn’t another fad approach to daytime brunching. In fact, the health benefits of quinoa are as mixed and established as the ancient grain itself. 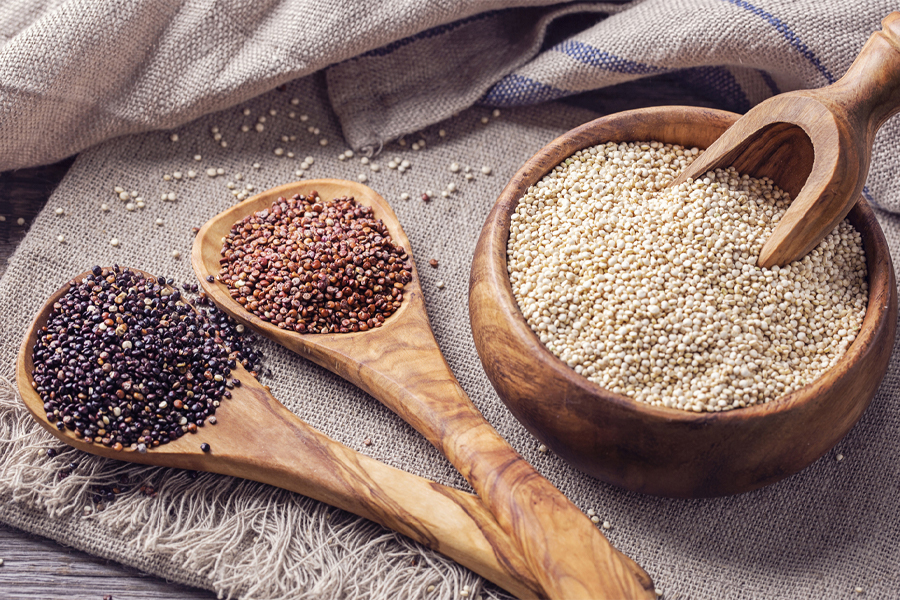 Born in the heart of South America thousands of years ago, quinoa was originally called “the mother grain” by the Inca, but in the years that have passed, the grain has become known as a ‘superfood’. While that terminology has been widely debunked as a bit of clever marketing, the health benefits of quinoa have not. In fact, studies into quinoa nutrition have revealed that the food is a major boost to your overall health, thanks to some key features. But before we dive into specifics, it pays to know exactly what is quinoa.

According to the Whole Grains Council, quinoa is a gluten-free, whole-grain carbohydrate formed from a seed from the Chenopodium quinoa plant. As whole grains are characterised as grass-based foods, this means the answer to the age-old question ‘is quinoa a grain?’ is surprisingly no. Despite the visual similarities, quinoa is not a grain, however, it’s not uncommon to colloquially refer to it as one. Specifically, there are over 120 different varieties of quinoa, but for the most part, we see quinoa in one of three main variants.

From a basic perspective, the quinoa nutrition value per cup is extensive. Covering a range of key macronutrients, quinoa has a complex and diverse nutritional make-up. In one cup (185 grams) of cooked quinoa, these are the nutrients you can expect to find.

For the amount of nutritional value you receive, it’s quite astounding to see that one cup of quinoa only comes out at a total of 222 calories. Within that 222 calories is around 40 grams of carbs and 5 grams of fat. 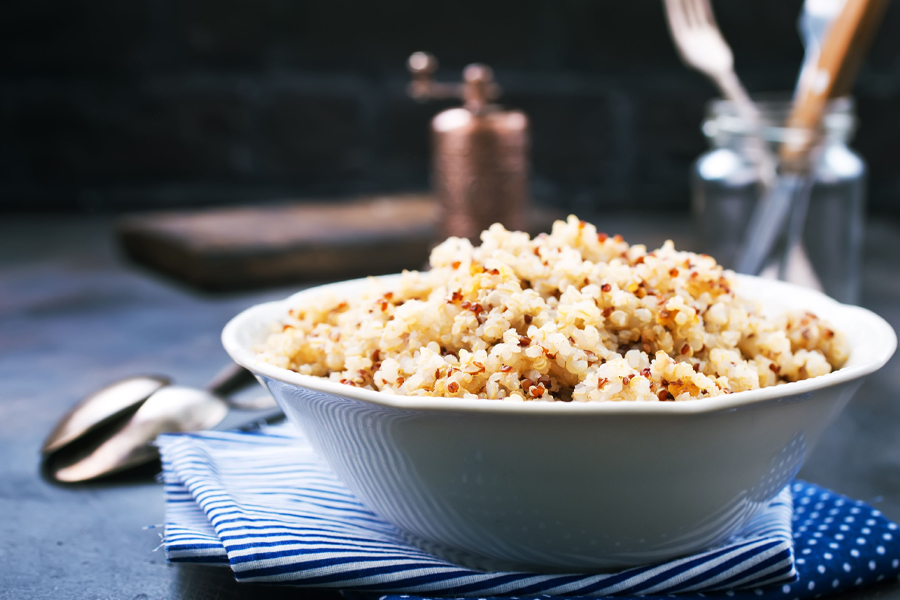 As we mentioned, quinoa health benefits are vast and expansive, thanks to its nutrient-dense make up. If you are looking to up your daily health regime and improve your diet, adding this (not) grain is an easy way to do so. Here is a list of the 10 top health benefits of quinoa.

As we all know, the primary feature of a healthy diet is protein. The essential macronutrient is ideal for muscle growth, recovery, brain function and overall health. One of the major quinoa health benefits is its high proportion of protein, coupled with the dense fabric of amino acids.

There are nine amino acids which are referred to as essential, as your body cannot produce them and needs to obtain them through your diet. Quinoa contains all nine and is referred to as a complete protein. Studies have also shown that quinoa nutrition information contains more and better protein than most grains. With 8 grams of quality protein per cup (185 grams), quinoa is an excellent plant-based protein source for vegetarians and vegans.

Another of the major quinoa benefits is the food’s high fibre content. One study found that across four different varieties of quinoa, there was a range of between 10 and 16 grams of fibre per 100 grams. While that doesn’t sound like much to the lamen, it’s roughly double that of most grains.

For the ketogenic lovers amongst us who believe carbs are the devil, this is a major benefit. Despite being heavy on carbohydrates, quinoa is what is known as a ‘fibrous carb’, meaning it can be factored into a low-carb diet, provided you allocate the correct macronutrient structure. What is important to note is the difference between soluble and insoluble fibre, which in this case can be quite high. One cup of quinoa will have around 2.5 grams of insoluble fibre.

As a general rule, most people don’t get enough iron. One quinoa health benefit is its dense concentration of the mineral, which offers around 30 per cent of your recommended daily intake. One thing to consider, however, is that it also contains a substance called phytic acid, which can reduce iron absorption. By soaking the quinoa prior to cooking, you can reduce the phytic acid content and make the iron more easily absorbed.

Another often overlooked amino acid is lysine. The essential amino acid is used to form carnitine, a substance found in most cells of your body. One major quinoa benefit is the high-quality lysine stores found in each cup. The acid helps to transport fat across your cells in order to be burned for energy. Increasing your quinoa intake may help your body to better regulate energy stores and fat deposits, making you feel more alert and active during the day.

Often referred to as ‘Low GI’, this is an important trait of health in general. Your glycemic index is a measure of high quickly a food raises your blood sugar levels, so eating high glycemic index foods, such as sugar can spike your energy levels before falling.

In the case of the quinoa plant, the low glycemic index carbohydrate will provide you with longer-lasting energy over a sustained period, ideal for daily consumption.

Similar to iron, the quinoa nutrition make up is heavy on magnesium. This mineral is critical for muscle recovery and overall wellness as it aids in the stimulation of muscle fibres. Once again, look to soak the quinoa prior to cooking to remove the phytic acid.

While it’s no surprise foods that are rich in nutrients and vitamins are good for you, the health benefits of quinoa go beyond simple additions. As quinoa is a plant-seed, not a grain, the food has a high proportion of plant-specific antioxidants known as flavonoids.

Among them, quercetin and kaempferol have been found to be extremely beneficial, due to their anti-inflammatory, anti-viral and anti-depressant properties.

Quinoa is extremely high in antioxidants, which is a major health benefit. These substances are believed to help fight ageing and protect the body against a number of challenging diseases and illnesses.

9. May Help You Lose Weight

In goes without saying, but in order to lose weight, you need to eat fewer calories than you consume. Certain foods are better at promoting weight loss than others, and one of the major health benefits of quinoa is the metabolic impact. Being high in protein, quinoa nutrition research shows that the food can both increase metabolism and reduce appetite significantly. Further, the rich density of fibre can make you feel fuller for longer, which may work to suppress your appetite, making you eat fewer calories.

The most hated of all the food groups, gluten has copped a pretty bad wrap over the past few years. In fact, in the US alone, around one-third of people are trying to reduce their gluten intake, which is a major reason why quinoa is picking up traction.

The ancient grain has proven to be a suitable alternative for people who are gluten-intolerant and cannot eat bread and pasta. Similarly, eating quinoa over typical gluten-free ingredients like refined tapioca, potato, corn and rice flour can dramatically increase the nutrient and antioxidant value of your diet.

Why is quinoa a superfood?

Quinoa is rich in fibre, minerals, antioxidants and all nine essential amino acids, making it one of the healthiest and most nutritious foods on the planet.

Can you eat quinoa to lose weight?

While quinoa is rich in carbs, it is also high in protein, which can both increase metabolism and reduce appetite significantly. The high amount of fibre may increase feelings of fullness, making you eat fewer calories overall.

Is Quinoa better for you than rice?

While quinoa and brown rice contain similar calorie counts and amounts of dietary fibre, quinoa does have slightly higher amounts of protein and lower carbohydrates per serving, making it slightly better for you.