Unlike the many workout & diet plans that we’ve cranked out on Hollywood hotshots shaping up for a lead role in an action-thriller, this elite year-round training program belongs to the NBA’s most feared point guard. Akin to b-ball’s Michael Jordan, Dennis Rodman or the late Kobe Bryant, Russell Westbrook has made a meteoric rise in and off-court with his penchant and pizazz, and, of late, scored a top fice spot in the sport’s highest-paid players. But while his performance on the court drew ire from fans, there is one thing you cannot question about the 2017 Regular Season MVP – His fitness routine. Explosive and unrelenting, the hulking athlete looks more akin to a linebacker than a point guard and with an enviable fashion sense also in the arsenal, it’s hard not to marvel at Russ. Here, we take a deep dive into the athlete’s high-intensity program. It’s scintillating enough to build lean muscle mass, maximise on-court performance and get you that jacked basketball player physique.

Who is Russell Westbrook?

Russell Westbrook III was born on November 12, 1988, in Long Beach, California and grew up in Hawthorne. His father Russell Westbrook senior raised him and his younger brother Raynard in South Central Los Angeles, where played many sports in his salad days, but was swayed to take up basketball through his father’s passion for the sport. In his early years, he had honed and developed his frenetic style by virtue of his father — who was an intense, career pickup baller — and would shepherd young Russell around the neighbourhood to gyms and parks to shoot jumpers and perform drills.

In his secondary school years, Westbrook attended Leuzinger High School and played as point guard for the school’s home team. Prior to sprouting to his full height, the youngster stood at a petite 1.73 m (5 ft 8 in) and relentlessly played basketball with his late bosom chum Khelcey Barrs in hopes of making the cut at the UCLA Bruins. By the summer of his senior high school year, Westbrook burgeoned to his adult height of 1.91 m (6 ft 3 in), making him a more favourable candidate for a professional career in the sport, and received his first college recruiting letter.

During that final school year, Westbrook made some splashes with his performance statistics; enough to pry the eye of coach Ben Howland, when recruiting him to play for the UCLA Bruins. While at university, Westbrook wore number 0 throughout his career. As a freshman in ’06–07, he played as a backup and was primarily used as a defender and energy player off the bench. After two years at the esteemed varsity, Westbrook entered the 2008 NBA draft and finished 4th and signed with the Oklahoma City Thunder later that year.

After almost a decade of playing for the Oklahoma City Thunder, Westbrook would be selected to play for the NBA All-Star Game several times and even the 2012 Summer Olympic team in London, where he brought home gold. In July 2019, Westbrook was traded to the Houston Rockets for All-Star Chris Paul, two protected first-round picks, and two second-round pick swaps. And in August  2021, Westbrook was traded to the Los Angeles Lakers. In the 2021-22 season, Westbrook secured an impressive USD$74.2 million, with his Nike partnership as well as 10 Southern Californian auto dealerships.

Westbrook is thus far one of the NBA’s most distinguished point guards; playing at a high level of intensity for the majority of his on-court time. Beyond the court space, the high-octane athlete is married to his college sweetheart, Nina Earl, a father of three, the owner of his snazzy sunglass label Westbrook Frames, a and is famed for his cheeky back sass with the press. The NBA star also accoutres his wrists in a KB3 band every game in homage to his late childhood friend Khelcey Barrs III. 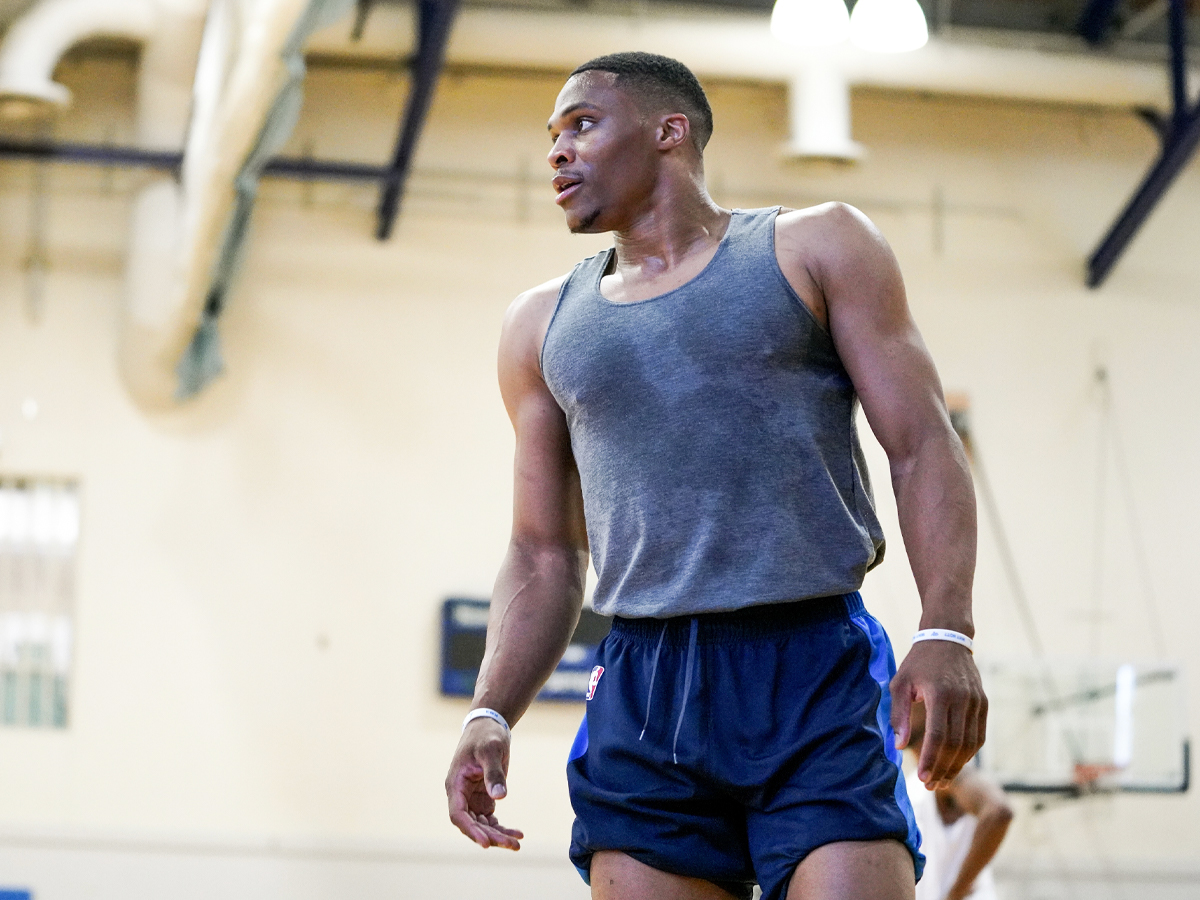 Before we run through the triple-double machine’s insane workout, we’ll be getting a good lick of his nutritious diet plan. When speaking to GQ‘s Clay Skipper, Westbrook’s said that his offseason meal plan kicks off like this. A breakfast ample enough to fill up the tank is exactly what the doctor ordered for an NBA All-Star. Comprising of fresh fruit, juices, eggs, hash browns, avocado toast, pancakes and waffles, it’s aptly healthsome and toothsome. For luncheon, it’s fish flanked with a dressing-laden salad. And for the final main meal on Westbrook’s menu, he tucks into wholemeal pasta, meatballs coupled with steamed greens or grilled vegetables.

But of late, the NBA’er has upped the ante in his fish intake. In lieu of the aforementioned dinner meal, he’ll feast on a decent serving of barramundi, snapper, or fish of that ilk, a side wholesome carbs, perhaps quinoa, and steamed greens. “As I get older, I have to figure out better ways to keep my body in the right shape and healthy, to be able to do what I want to do, especially while playing,” he told GQ. And like many top-flight athletes, Westbrook needs respite. In his off days, he’ll guzzle down many thirst-quencher like smoothies, protein shakes, with peanut butter to famish his cravings and accelerate recovery.

Akin to Usain Bolt’s diet of guilty pleasure foods, particularly prior to his world-record race, Westbrook has copped a bit of flack for getting naughty with his regime; constantly chomping on snacks in-between meals. Whether it’s his coveted childhood Payday peanut butter bar, PB&J sandwiches, smoothies, yoghurt or parfaits, The Brodie has no shame in the diet game. Even on game days, he’ll wolf down a couple of PB&J sandwiches with some fruit and plain sauce-less pasta. “ since I was in high school,” he told GQ. “The pasta came a little later. The PB&J has been like that since I been in high school.”

For starters, Westbrook’s athleticism is not to be sneezed at. His striking speed alone has him one of the league’s most exciting basketball players. To ensure he was firing on all four cylinders on game day, his training program keyed on the strength, flexibility, durability and explosiveness of body muscles. Via combining a multitude of workouts five days a week, he’s been able to set the record for the most triple-doubles in a season. The routine compasses plyometric, strength & conditioning exercises, sand dune runs, point guard work and team on-court interplay.

Keeps Details Close to His Chest

Unlike jacked-up NFL players, professional basketballers aren’t meant to be beefy. Carrying a herculean bod on-court hampers players’ performance. Westbrook may not have Arnold Schwarzenegger’s chest, but it’s certainly defined and proportionate. In his workout plan, the NBA star only employs three exercises to sculpt his pecs: barbell bench press, dumbbell bench press & the walking dumbbell push-up to row. There are additional exercises in his routine that indirectly target pictorial muscles; wherein they enhance speed, strength, agility and physique.

Loves to workout outside

In a video by HBO Sports, Westbrook’s offseason training entailed sand dune runs once a week. Since the pro-NBA player is more inclined to an alfresco workout, which involves running drills up sand dunes in the outdoor heat, he’s been shown to comfortably complete the session while tagged with teammates. “I’ve been doing it for so long, so I know how to manage it, and how much I need and how long I need to be there,” says Westbrook. “So it’s not painful at all. It definitely helps — in my legs, in my endurance.” The NBA star is also shown to train outside with teammates in a video during quarantine, where he rigorously performs footwork drills, giving followers a glimpse into his hard-earned athleticism.

Is an explosive athlete

Plyometrics are one of the most imperative exercises for basketballers; helping them enhance muscle explosiveness and their reach for the hoop. Since point guard’s run the offence and is the team’s best dribbler and passer, it was crucial to integrate plyometrics in Westbrook’s routine. Through a variability of box jumps and explosive weighted body exercises, The Brodie continues to average one too many triple-doubles every season, push the pace of the game for transition points, attack the basket, attack the rim and showboat his sensational ball mobility and his vertical jumps of 36.5 inches (93 cm). 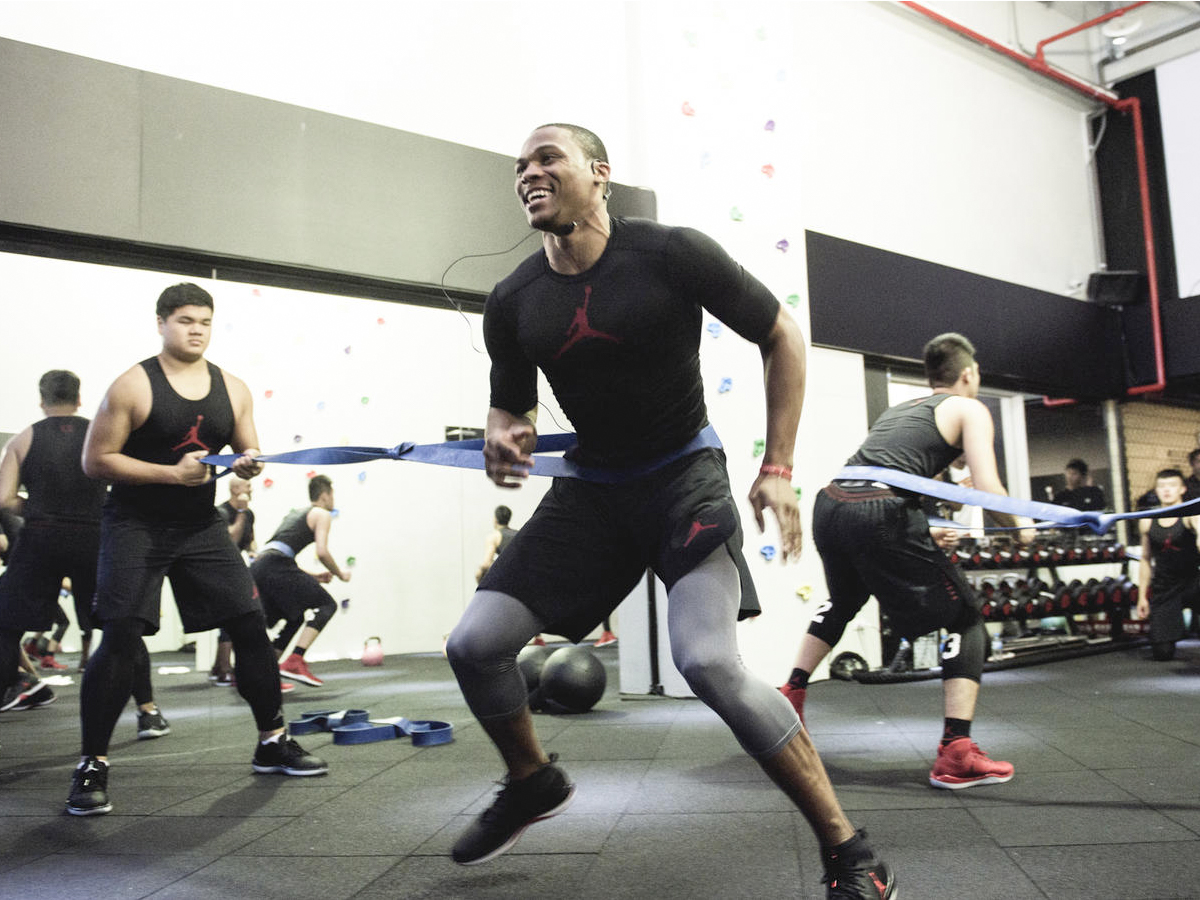 The pro basketballer addedly works out his core, upper body muscles and undertakes high-intensity cardio sessions for stamina. While the cardio helps in giving him speed and better mind-body coordination, weighted exercises contribute to muscle strength and greater output. But interestingly, Westbrook doesn’t lift a lot of weights. He told GQ that his training focuses on movement, stretching, stability, and strengthening. “That’s kind of where I been throughout the week, just making sure my body is up to tune, consistently working on things that need to be worked on so that I can perform at the level that I feel like I’m supposed to perform at,” he said.

What is Russell Westbrook's chest workout?

Westbrook may not have Arnold Schwarzenegger's chest, but it's certainly defined and proportionate. In his workout plan, the NBA star employs three exercises to sculpt his pecs: barbell bench press, dumbbell bench press & the walking dumbbell push-up to row.

What is Russell Westbrook’s vertical jump?

How tall is Russell Westbrook?

How old is Russell Westbrook?