Over 370 classic cars were put to auction on Saturday, 26 November 2022, with Lloyds Auctioneers and Valuers fielding a selection of automobiles made famous by Hollywood. Amongst the historical collection of cars was a 1953 Chevrolet Pickup used in the recent Baz Luhrmann Elvis movie, an Australian-made 1986 AM General “Humvee” that would make Arnold Schwarzenegger proud, and star of the show, a 1982 DeLorean DMC-12 conversion that is almost an exact replica from the first Back to the Future film!

With movie prop vehicles going under the hammer starting from just $1, we’ll tell you how much these classic cars were auctioned for and when you might get the chance to score a piece of automotive history yourself, thanks to Lloyds online classic car auctions. 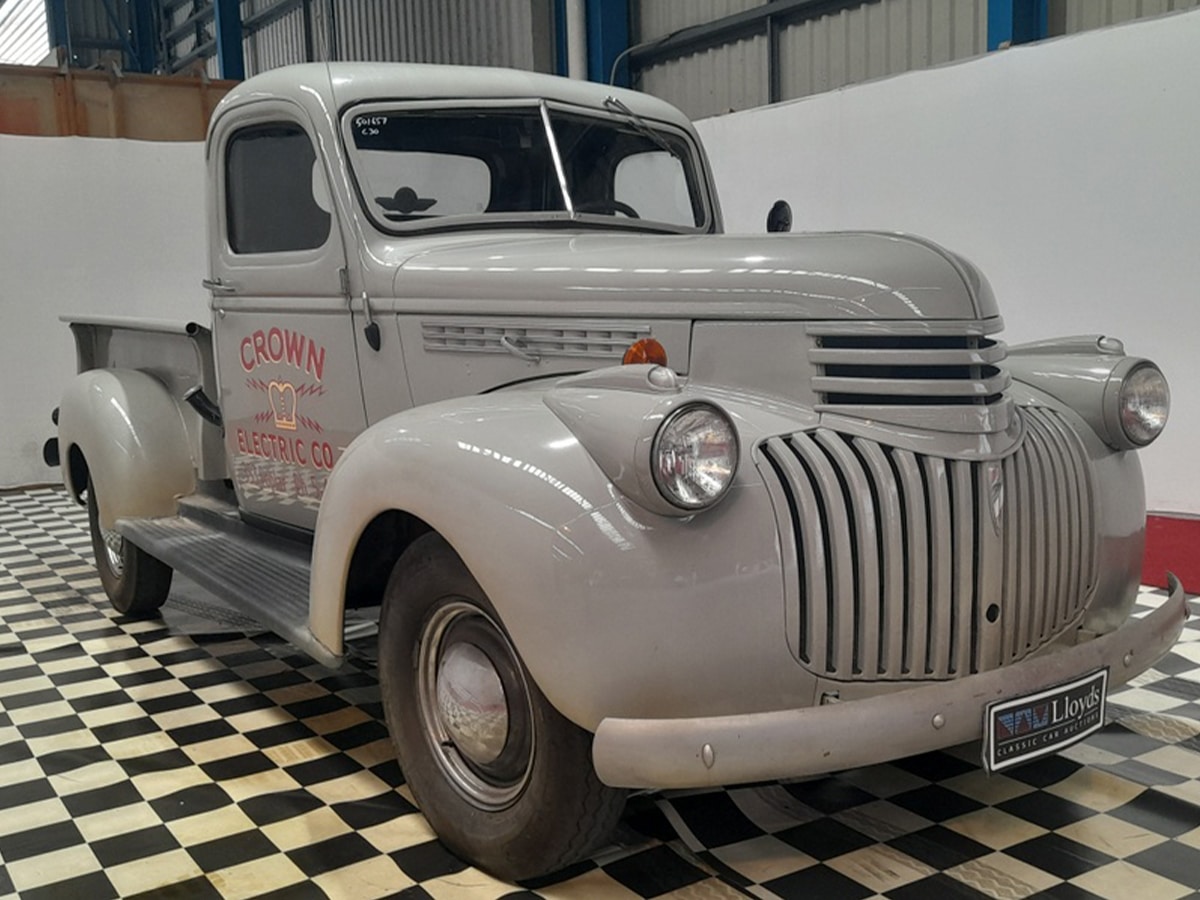 “This is a fantastic opportunity for all movie buffs to own their own piece from an iconic movie everyone knows and loves,” said Lee Hames, chief operations officer for Lloyds Auctions. “Imagine driving and owning the vehicle that Austin Butler drove in the Elvis film; this opportunity doesn’t present itself every day, so bidders need to get in quick,” continued Mr Hames, which is a shame since the auction has already come and gone. However, we can’t help but giggle since the historical collection auctioned off a Back to the Future 1982 DeLorean DMC-12 conversion.

“This vehicle is ready to get up and go and is sure to be a head turner, decked out with some of the highest quality props and made to be almost an exact replica from the Back to the Future film,” said Mr Hames.

These two iconic movie vehicles, alongside over 370 other classic cars, went under the hammer this past Saturday, 26 November. Included in the luxury list of nostalgia were: six Cadillacs, three Buicks, three Pontiac Dodges, seventeen Chevys, six Harley Davidsons and an Indian, five VW bugs and eight Kombis, a stack of Mercs and Beemers, a Porsche 2.0, Jags, three Rolls-Royce, and Aston Martin DB7, six Nissan Skylines, plenty of Toyotas, Hondas, enough Ford Falcons to fill a race track (including a genuine yellow ochre 1970 XY GT) and classic Holdens and Commodores that’ll have you singing Down Under faster than you can say 1976 Holden LX SS Torana!

“There’s nothing quite like the appeal of a classic car, and when it comes to classic car sales, Lloyds Auctions offer some of the rarest and most desirable collectable cars for sale in Australia.”

Let’s dive into some of the fantastic pieces of automotive engineering. 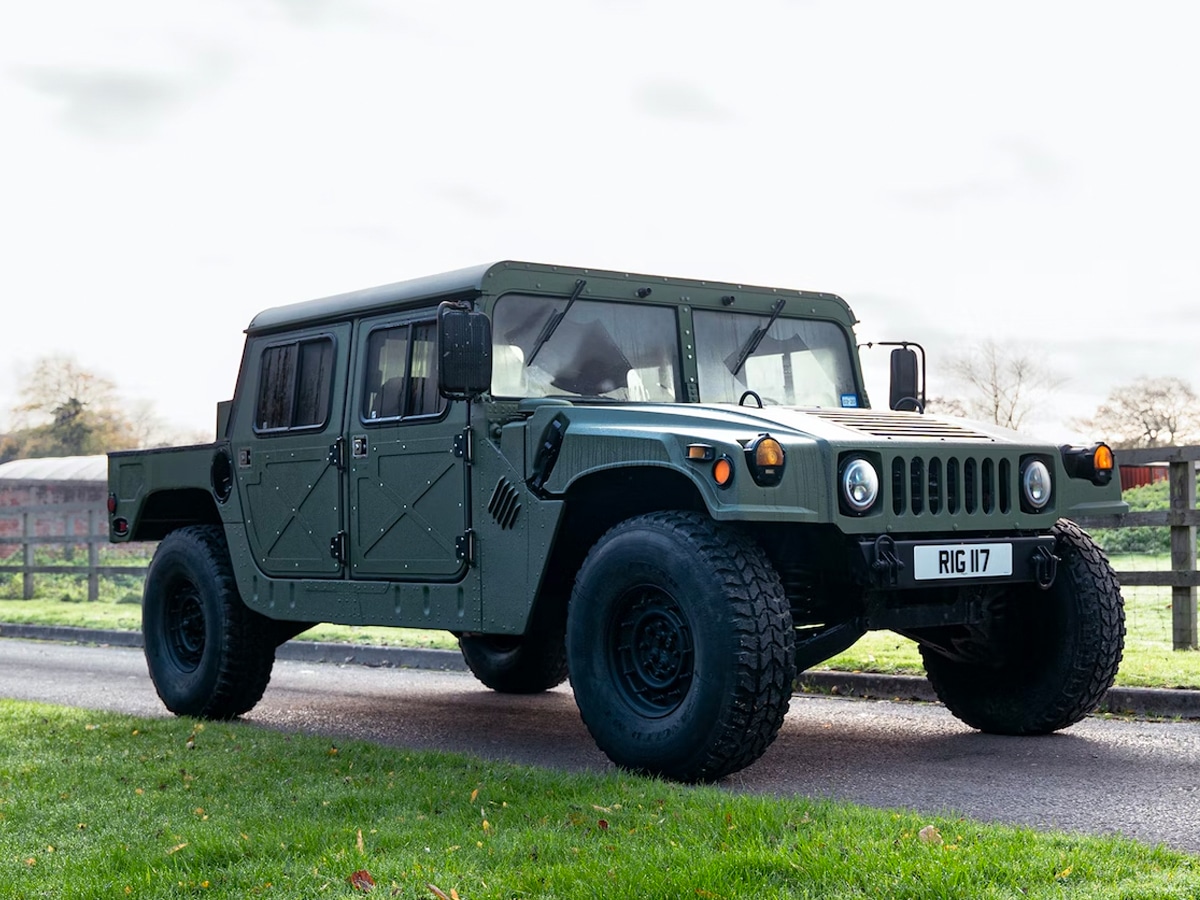 1986 AM General “Humvee” (Not the example offered by Lloyd’s Auctions) | Image: Collecting Cars

This is the ultimate big-boy toy! Don’t expect too many modern comforts inside this military-grade vehicle. Instead, you’ll find a brand new Brunswick Diesel motor fitted by Clarke automotive, alongside a bunch of updated fittings, including a new radiator, brakes, modified exhaust, fuel tank, brush guard, aftermarket seats, converted to right-hand drive, new auto gearbox. Oh, and if its new owner wanted to keep the original engine, it’s sitting in the trailer. 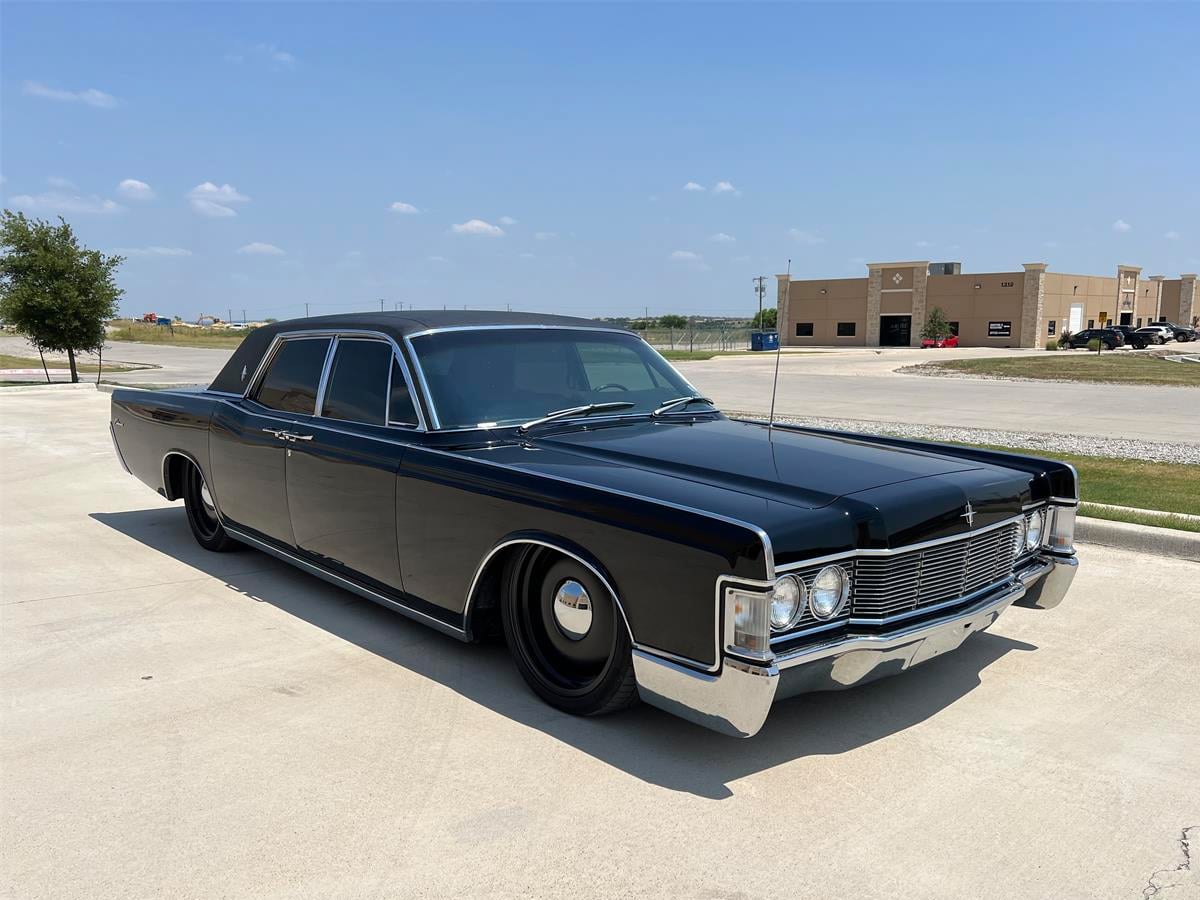 You can thank Federal safety changes in the US for the return of the wraparound light design for the parking lights, taillights, and front turn signals and the addition of torso seatbelts for the 1968 edition of the Lincoln Continental. Gone were the words “Continental” in favour of a front fascia adorned with the Lincoln star emblem. Unfortunately, Lincoln prematurely removed the hood ornament in response to an unrealised federal ban on the automobile accessory. However, many car manufacturers have ceased the practice due to changes in style and the wind-resistance issues they cause. Another fun fact about the Lincoln Continental is its use as a Presidential state car, serving from 1961 to 1977, with LBJ’s 1968 Lincoln Presidential Limo currently on display in the Lyndon Baines Johnson Library and Museum at the University of Texas in Austin. 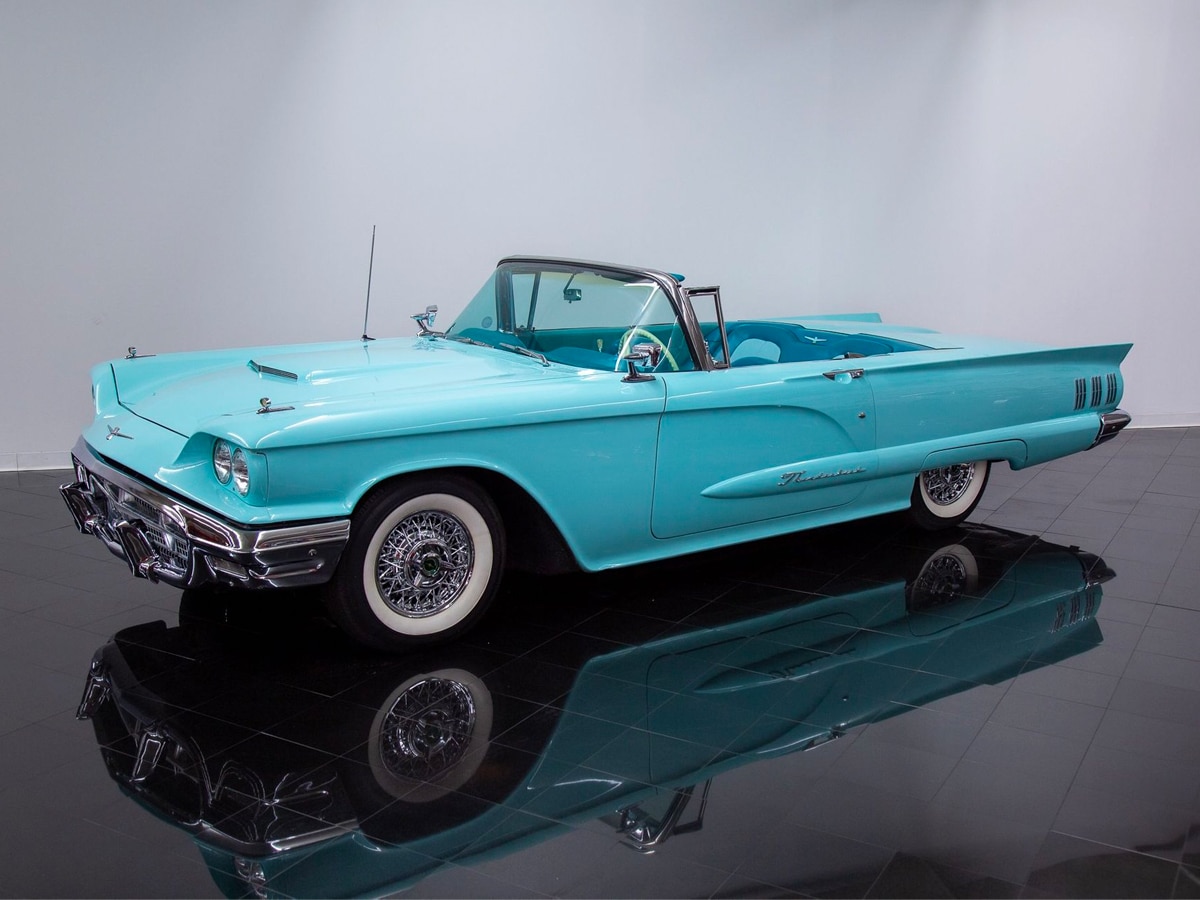 The Square Bird, as it’s affectionately called due to its blocky form factor, is a second-generation Ford Thunderbird that, for its time, was the epitome of full-sized automobile luxury. Following on from the first unibody construction design of the 1958 model, the new Thunderbird resulted from two incredible designs, one of which would later become the 1961 Lincoln Continental. The other, designed by Joe Oros, aimed to maximise interior space and a distinct new styling theme. And since this beauty didn’t go under the hammer, it’s still up for grabs for anyone that can meet the asking bid. 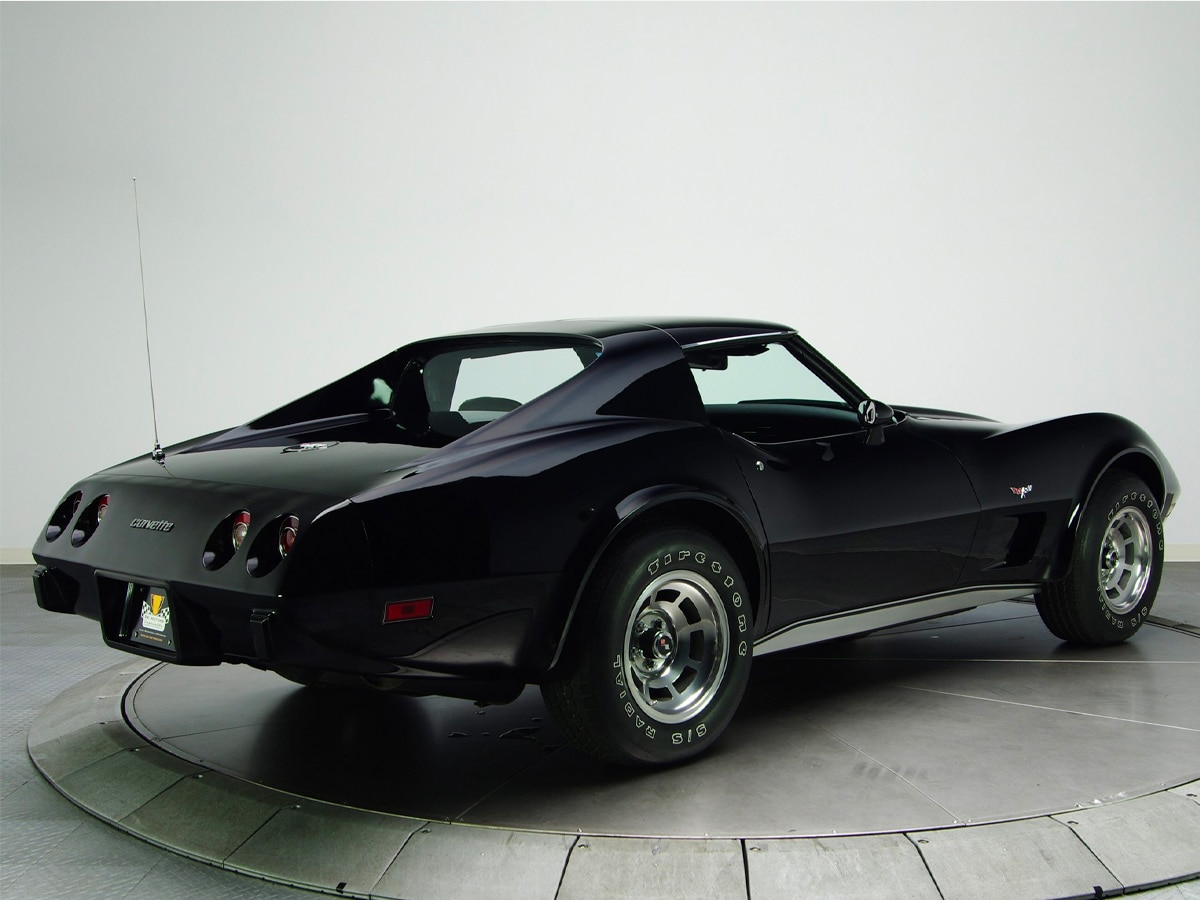 The last of the vertical rear window Sharks, the 1977 Chevrolet Stingray Corvette, arrived on the auction floor at an opening bid of $20,500 only! Also known as the C3 and featured in the 1997 film Boogie Nights, this third-generation sports car featured engine and chassis components similar to the previous era but with an updated body and interior that encouraged a more “arms out” position for the driver. Also updated was the name, with Corvette officially adopting the single-word variant for the 969 – 1976 model years. Funnily enough, the 1977 model (the same one featured here) still clings to the name, despite the chassis having the “Stingray” script stripped from the front fender and replaced with the new cross-flags emblem. The new model also marked a milestone for the car manufacturer, with half a million Corvettes built since 1953! 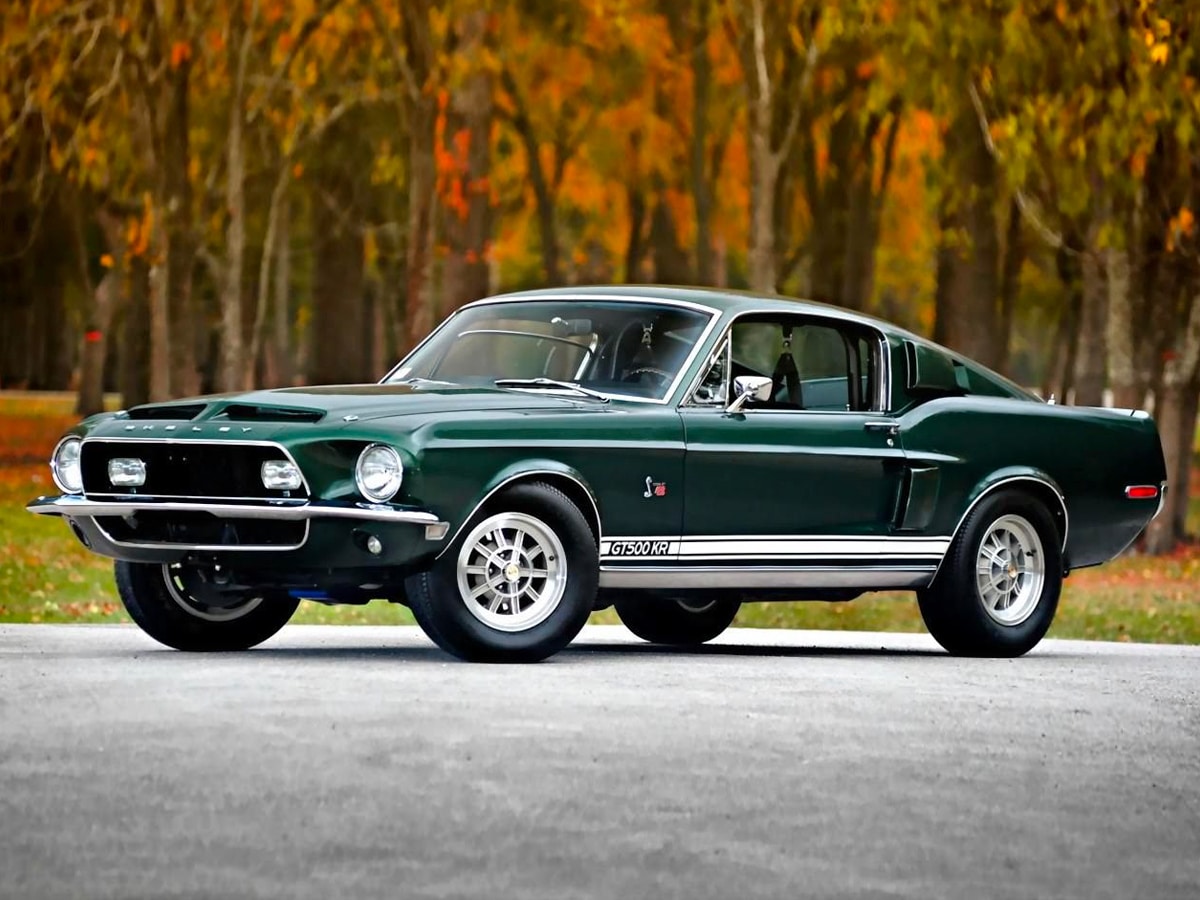 Imported into Australia during the 1970s, this 1968 Shelby GT500 Cobra 428 is an older restoration model of the high-performance variant of the Ford Mustang built by Shelby American. Still featuring the original glass, seat belts, roll cage, body panels, and fibreglass, it’s in near-perfect condition, other than the “Very Minor hairline crack on both left and right side of the bonnet Air intakes.” 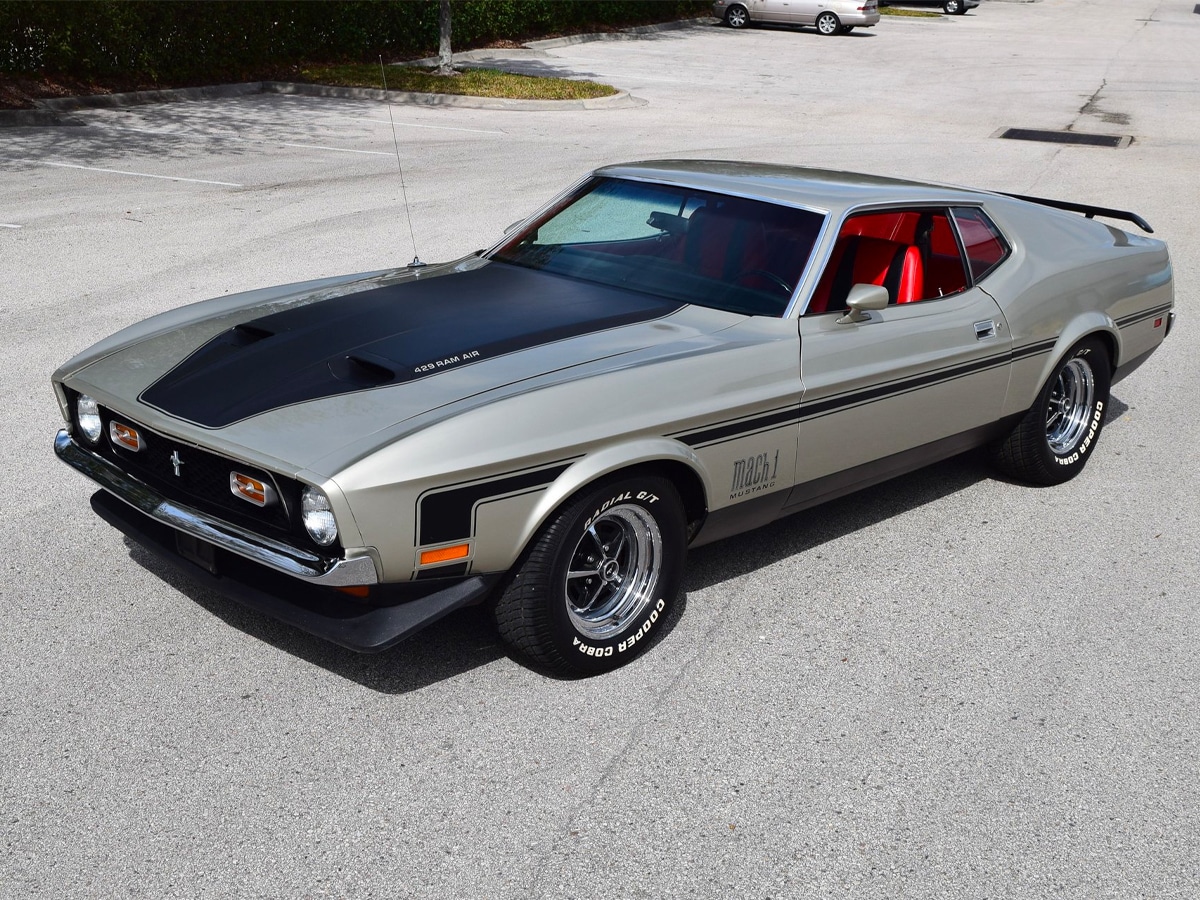 The first thing you’ll notice about the 1971 Ford Mach 1 429 Cobrajet Mustang are the twin dual Ram Air scoops of the hood design. Offered as standard for the 429 models, the Ram Air featured a vacuum-controlled door inside each scoop that directed cool air into the engine. We also bet the wicked cool two-paint scheme helped Mach 1 go fast. What you may not know is that it was the last of the Ford Big Block Mustang engines, a true collector’s item. 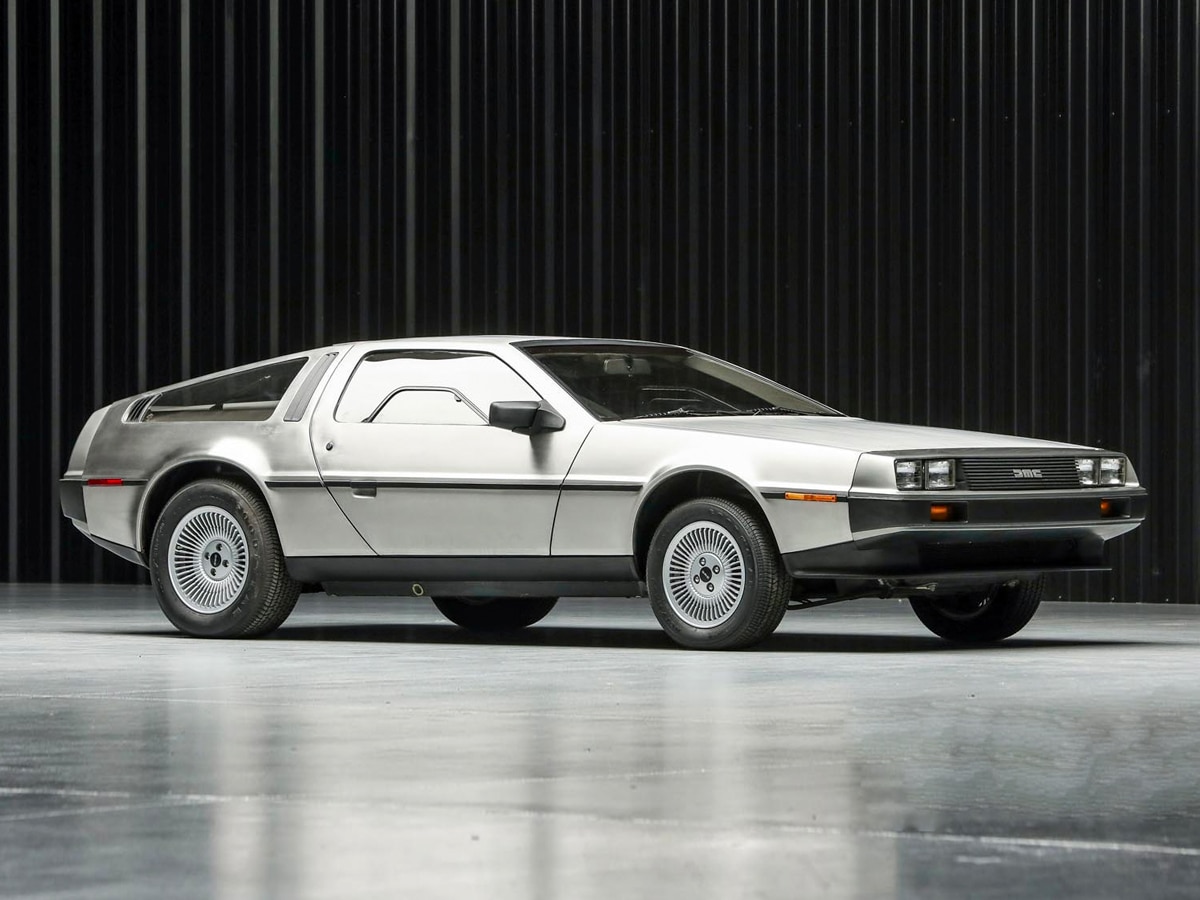 Great, Scott! This isn’t just a regular 1982 DeLorean DMC-12; this is a turnkey movie prop that is an almost exact replica of the first Back to the Future film! And when we say movie props, we mean the highest quality props made by “top prop makers, complete with a flux capacitor, time circuits, plutonium gauges and more that all link together with effects from the movie!” How much cooler does it get? Just make sure you don’t start messing with the fabric of space and time, or else you might get booked by one of those Time Cops from Rick and Morty.

A little less conversation, more bidding, if you know what we mean. This is the actual 1953 Chev pickup truck custom-built for the recent Baz Luhrmann movie Elvis. Fresh from its “Hollywood” starring movie role, the Chevy pickup is in excellent condition, so don’t let the faux aging/patina that was applied for the film fool you. The tray has a wood grain finish, with just one minor defect: a small scratch on the driver-side rear wheel well. 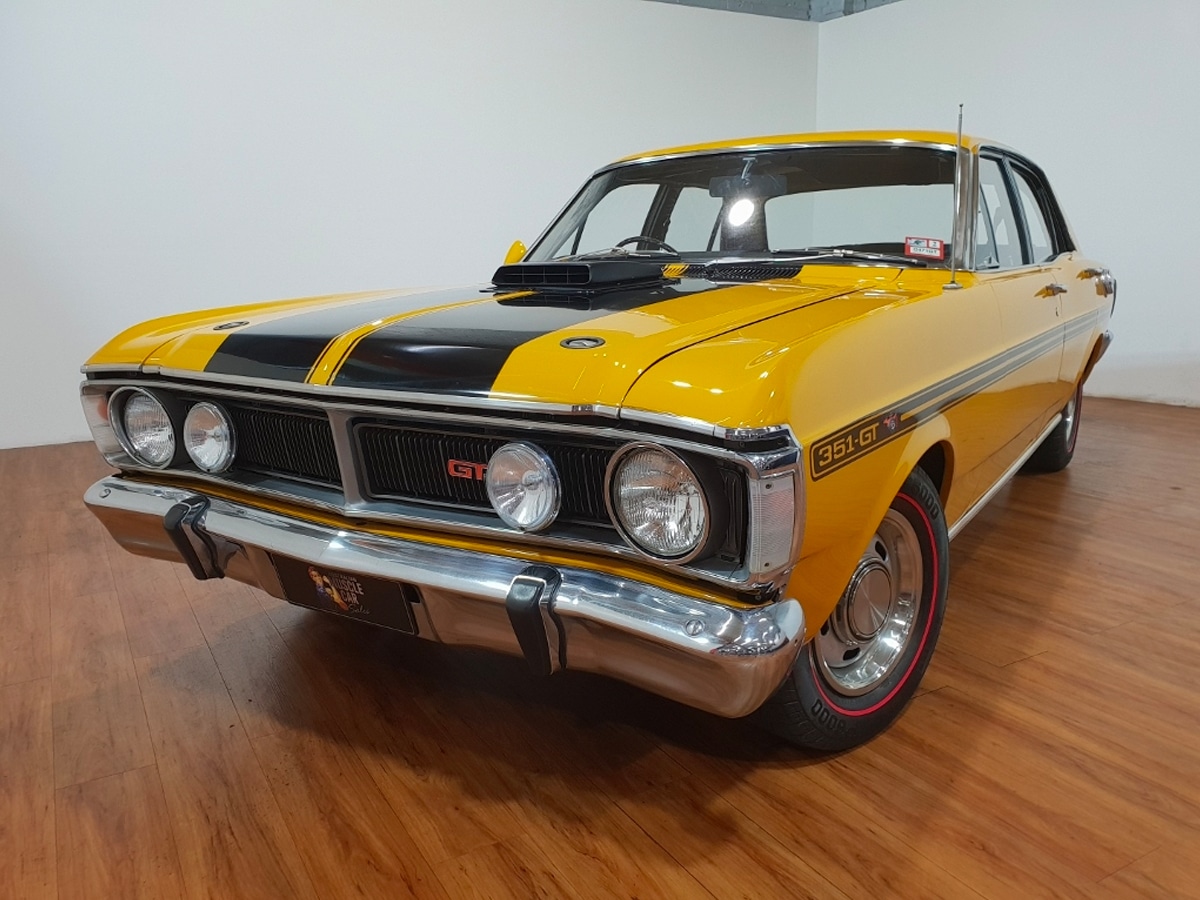 Owning this car is like owning a piece of automotive history because it is one of the most recognisable Australian automobiles, and its value is only increasing. The Ford XY GT has become such a legendary street and track racer that it was virtually unbeatable in the 1970s. This particular model has a black saddle trim interior and a still-brilliant Yellow Ochre paint finish. A 351ci Cleveland V8 engine, original manual gearbox, and diff can all be found under the hood. 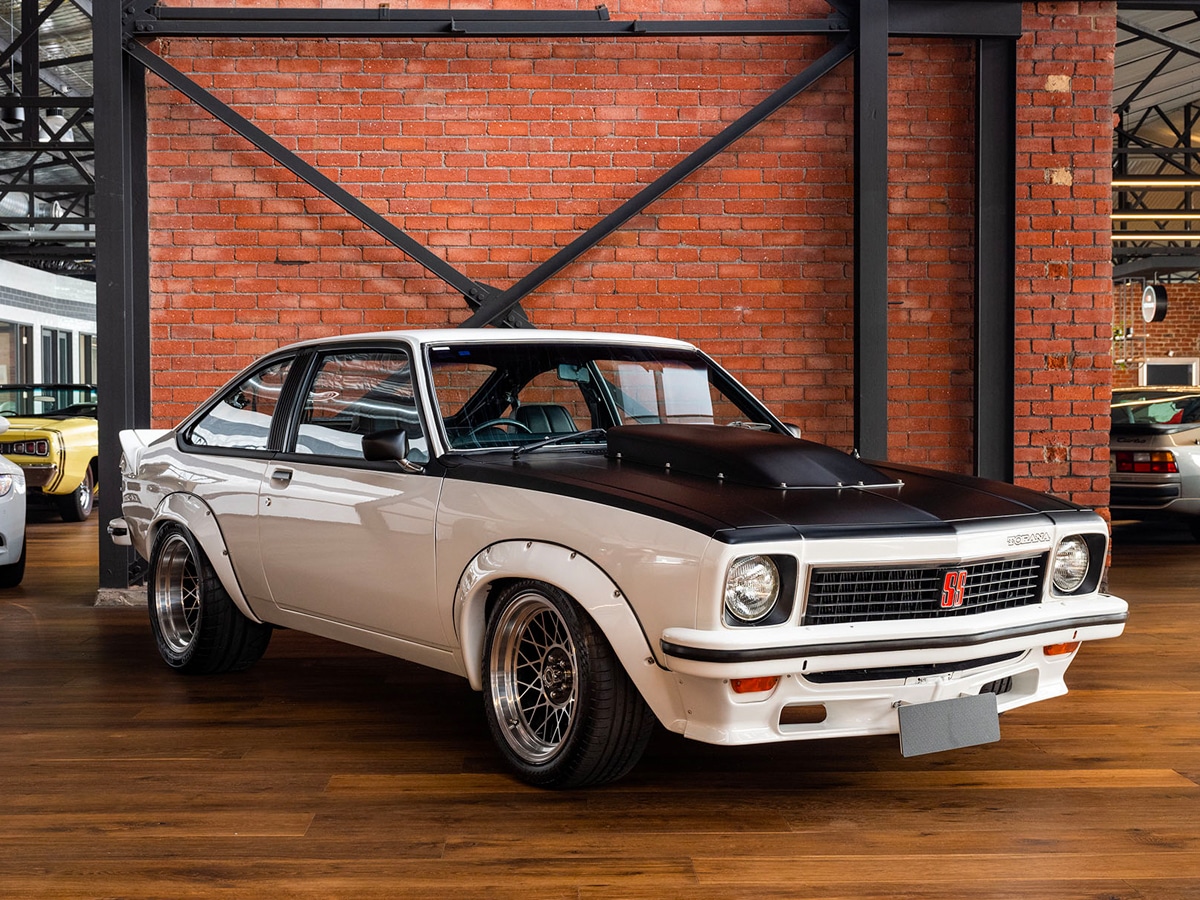 Though the original car was coated in a loud Papaya orange paint scheme with a 6-cylinder 4-speed engine inside, this 1976 Holden LX SS Torana was juiced up to a Geoff Kendrick performance Engine rebuilt 308 A9X spec V8 motor. So the only logical option for the new paint job was red with black stripes on the bonnet hood and spoilers. 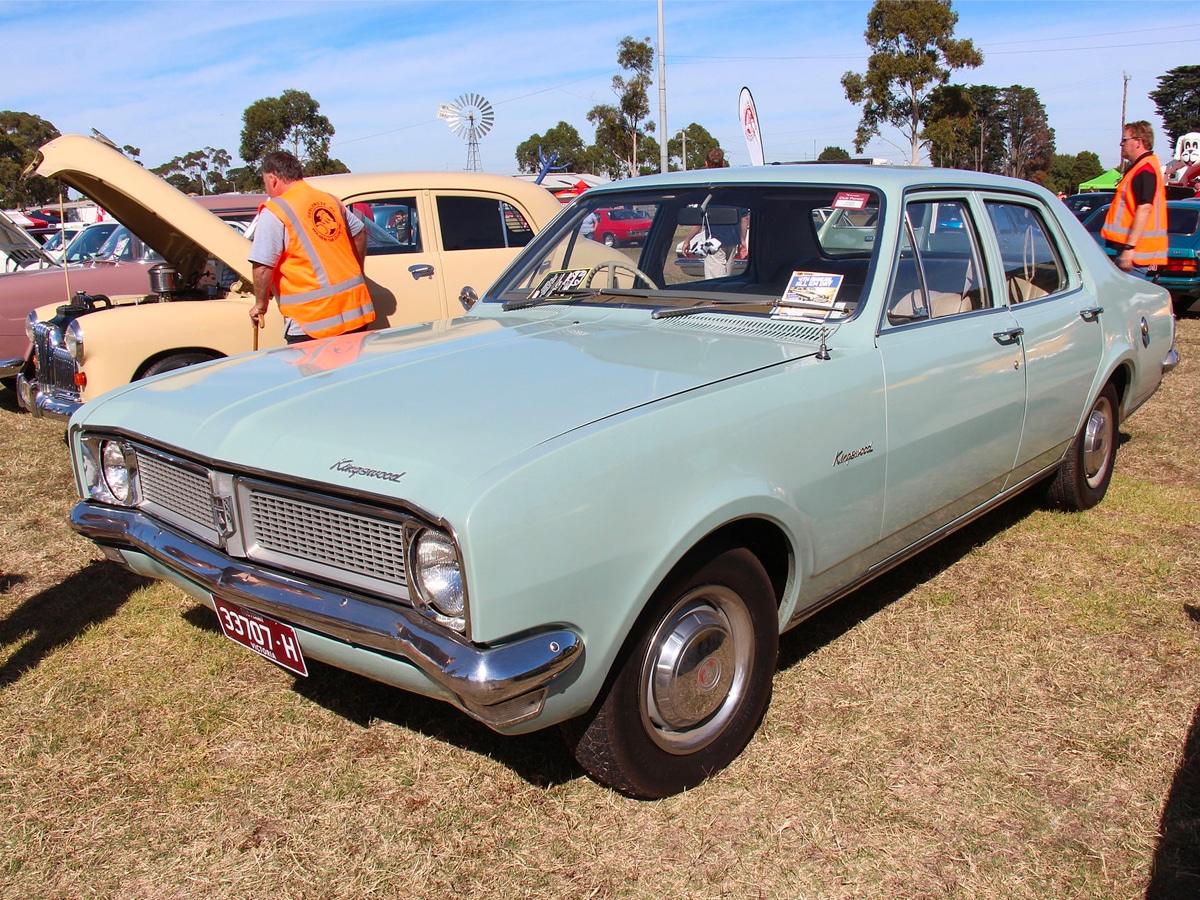 We don’t know what it is about this 1971 Holden HG Kingswood that transports us back to a simpler time. With nostalgia levels through the roof and a raging big block Chev 402ci V8 engine (give it a listen here), we imagine our dad picking us up from school on a Friday afternoon, revving the engine to delight all our envious school friends. 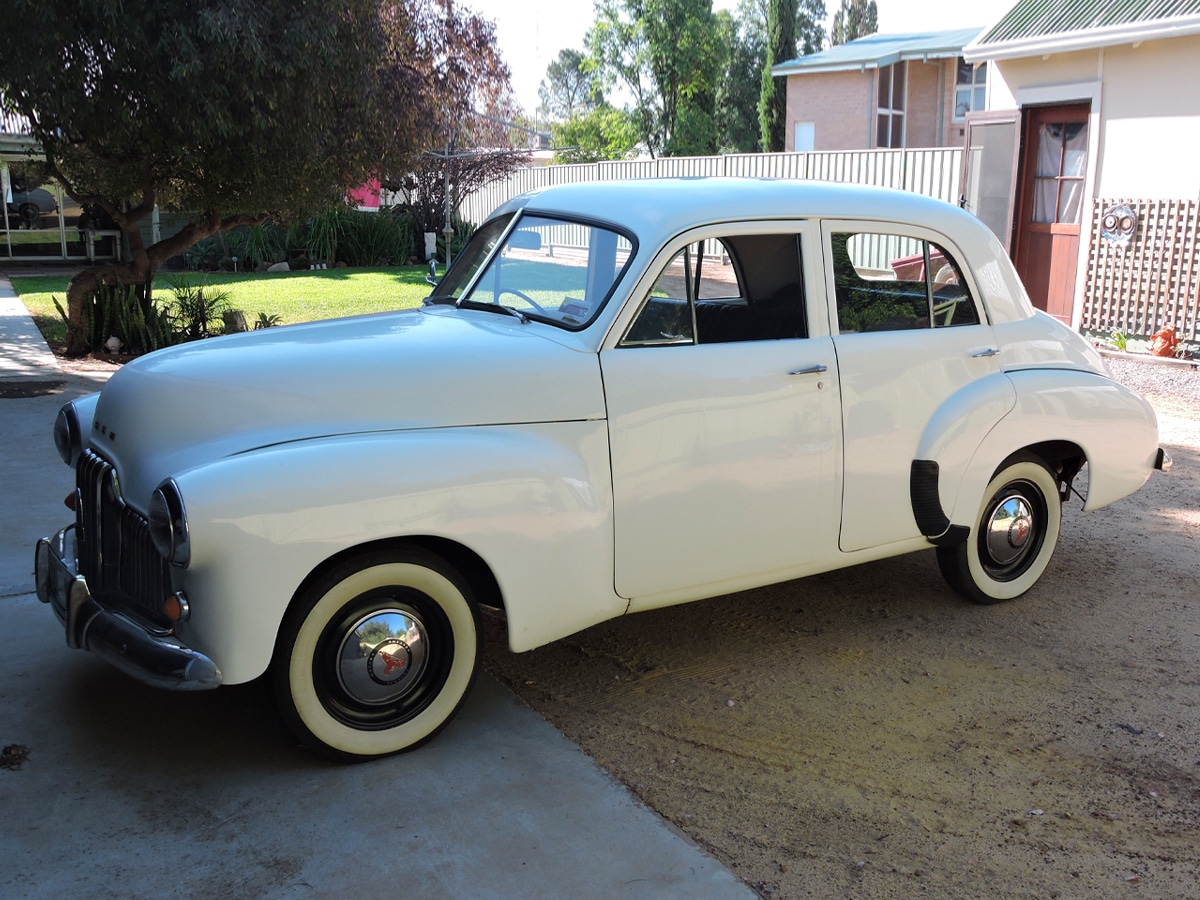 Lucky last in a field of classic automotive history, this 1952 Holden FX hot rod is expected to leave its previous owner after a 31-year-long custodianship, in which the car underwent a complete overhaul in 2017. The classic vehicle received a two-tone custom paint job alongside mechanical engineering and aftermarket parts. Inside, you’ll find a (takes a deep breath) motor 6ltr cast-iron block, speaker kit 427cui, 671 supercharged endless hats, water-methanol injection, EMS computer, and a big money Engine with hand-made extractors with twin 3″ exhaust. Check out this video to hear it purr!