If you’ve been wondering what it would take to officially tip Piers Morgan over the edge, it may have come as a shock to find out it was (Prince?) Harry and Meghan Markle’s tell-all interview with Oprah Winfrey. Two hours of confusing revelations that stunned audiences and had this writer’s partner attempting to explain the relevance of the Royal Family in explicitly too-much detail left us with more questions than answers. But above all else, we scored out on meme-content. Flooding our feeds was a host of great Royal Family memes and videos, loaded with spite, negativity and more than a few bad British accents. Lovely jubbly.

You’ll also like:
All the Best Memes from the 2021 Super Bowl
40+ Best 2020 US Election Memes
The Best Among Us Memes on the Internet

Writers and producers of The Crown watching this interview like #HarryandMeghanonOprah pic.twitter.com/yvCgQpVlFx

The Birth of Harry and Meghan Memes

The whole ordeal is quite a shambles, but it’s worth reminding everyone why we’re in this mess and why we should care. The Oprah interview marked the couple’s first since leaving the Royal Family, opening Meghan and Harry up to questioning on the inner sanctum of the British monarchy.

The tell-all interview provided some explosive insights, with one revelation suggesting that members of the family were concerned over how “dark” Archie’s skin would be. Make no mistake, the allegations of racial discrimination are troubling and demand recognition, but that wasn’t all. We also heard from Meghan about her struggles with mental health, public abuse and the media bias that had pitted her against fellow Royal ring-in Kate. After an extended period that saw a lot of confused nodding from Oprah, Harry joined the two for the remainder of the interview.

While a lot of the Hary and Meghan interview confirmed our suspicions, that the two are exceedingly wealthy, Archie is well-looked after and their dogs are happy, there were some surprising announcements. Namely, that Meghan had never heard of the Royal Family before meeting Harry and that the Queen was never blind-sighted by the pair’s decision to exit the family. Instead, it was more that the Royal Family was simply unable to support them in their ongoing endeavours.

In the hours that passed, several media organisations suggested the blockbuster interview could spell the end of the monarchy, with reporters waiting on a response from the Queen. On Wednesday, she delivered.

“The issues raised, particularly that of race, are concerning. While some recollections may vary, they are taken very seriously and will be addressed by the family privately,” the Queen said. “Harry, Meghan and Archie will always be much loved family members.”

Whatever your take on the Royal Family implosion, the real gem of the situation is still being felt, through the power of sweet memes. Here is a collection of our favourite Harry and Meghan memes from the Royal Family Oprah interview.

More dynamite clips coming out of the Harry and Meghan interview! pic.twitter.com/AbIRyNqOun

A post shared by Nadia – Money, Marketing, Me (@nvknows)

the royal family deciding if archie will get a title or not #HarryandMeghanonOprah pic.twitter.com/0f2FJ3UcPV

Me the whole time watching the Harry and Meghan interview #OprahMeghanHarry pic.twitter.com/ylLx8tyKid

Alright I finally watched the interview. I like Meghan a lot but GIRL AINT NO WAY U AINT LOOK UP THE ROYALS BEFORE AND AFTER U WERE DATING HARRY. That’s why Oprah called her on that ish 😭 pic.twitter.com/mLMeyExFs3

"Oprah with Meghan and Harry" will be rebroadcast Friday at 8pm” CBS confirmed ☕️ #OprahMeghanHarry pic.twitter.com/36hVW9fWDu

‘there is a god’ trending in the UK because piers morgan left PLS 😂😭 pic.twitter.com/6mXg1O8CR7

Oprah just woke up one day and was like "you know what, I'm bored. Lemme take down the British monarchy"

“hi guys, lotta rumours on the timeline tonight so i just wanted to go live to share some truths” pic.twitter.com/eS3WLKDIYT

ONCE AGAIN AMERICA WILL DEFEAT THE BRITISH MONARCHY BY SPILLING TEA

You’ll also like:
All the Best Memes from the 2021 Super Bowl
40+ Best 2020 US Election Memes
The Best Among Us Memes on the Internet 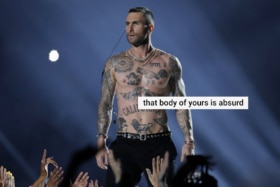