From his gaming chair to his gaming monitor to his gaming PC to so much more, Ninja’s Fortnite gaming setup is a digital warrior’s dream come true. And just who is Ninja, you might ask? Born Richard Tyler Blevins—but better known by his trusty alias—Ninja is currently the most popular gamer on Twitch (to the tune of about 13 million followers). Along with all those followers, there’s come a slew of peripheral perks, including sponsorship deals, a recording contract, a Super Bowl spot, and an ESPN magazine cover shoot. It’s therefore only natural that Ninja spends at least some of those hard-earned dollars on more gaming gear.

Consequently, Ninja’s Fortnite gaming setup is as extensive as his skill set. But what exactly does the veritable Twitch sensation keep in his tech-laden arsenal? Today, you’re going to find out, with what might be the most comprehensive list we’ve compiled since Casey Neistat (meanwhile, our rundown of PewDiePie‘s gear might need its own separate website soon). Without further ado, we present Ninja’s Fortnite gaming setup, settings, and gear. With its 1ms response time, sleek design, brilliant display technology, and super fast native refresh rate of 240Hz, the Alienware 25 Gaming Monitor brings those graphics to life with deft and stunning precision. Ninja’s Fortnite gaming setup simply wouldn’t be the same without it. 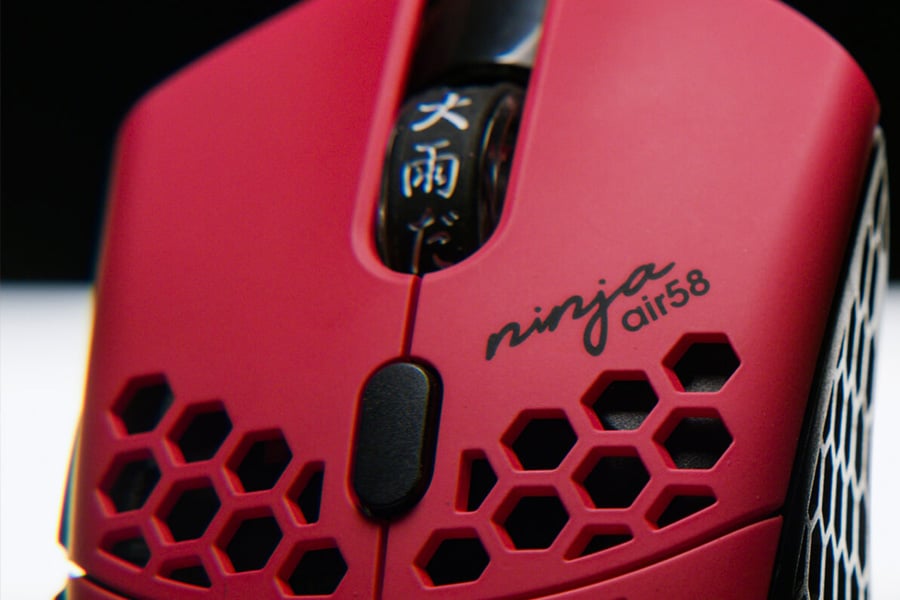 Ninja gets his scroll-and-click on like…well, a ninja. That is to say, he uses the Air58 gaming mouse, which comes in a striking shade of Cherry Blossom Red, weighs just 58 grams, and features hand-painted and engraved Haiku Scrolls on the scroll wheel. Throw in best in class sensor and input latency, and this gadget leaves nothing to be desired. 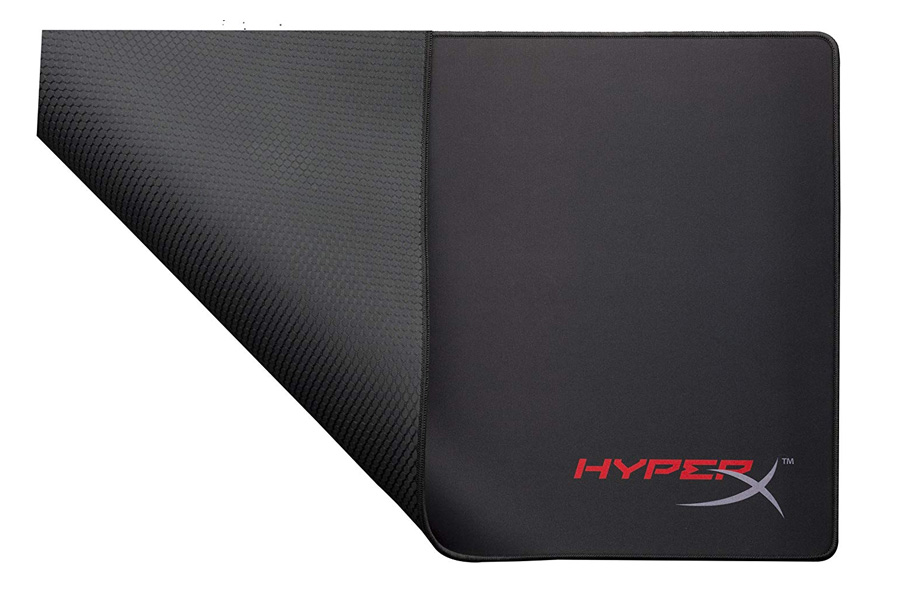 Optimised for precise gameplay and accurate tracking, the HyperX FURY S Pro Gaming Mouse Pad touts anti-fray stitched edges and a densely woven surface. On the underside is a textured and stabilising spread of natural rubber. Available in four sizes, the pad is tough, portable, and always ready for action. 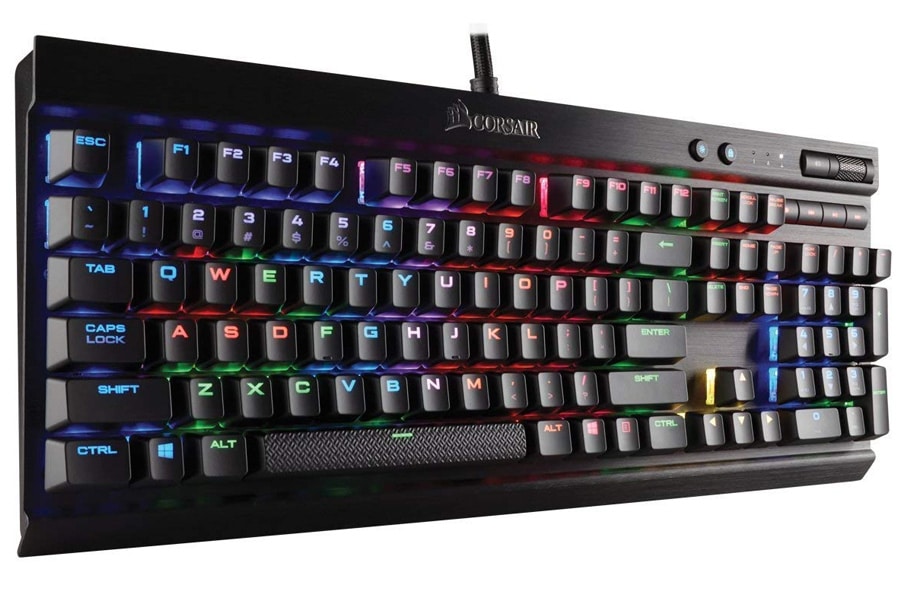 True to its name, the CORSAIR K70 RGB RAPIDFIRE Mechanical Gaming Keyboard delivers rapid-fire results, making it the brand’s fastest keyboard to date. Featuring an aircraft-grade anodized brushed aluminum frame, vivid RGB LED backlighting, a USB pass-through port, and a host of multimedia controls, the keyboard is as sturdy and it is versatile. It’s also Ninja’s proverbial weapon of choice behind the scenes. 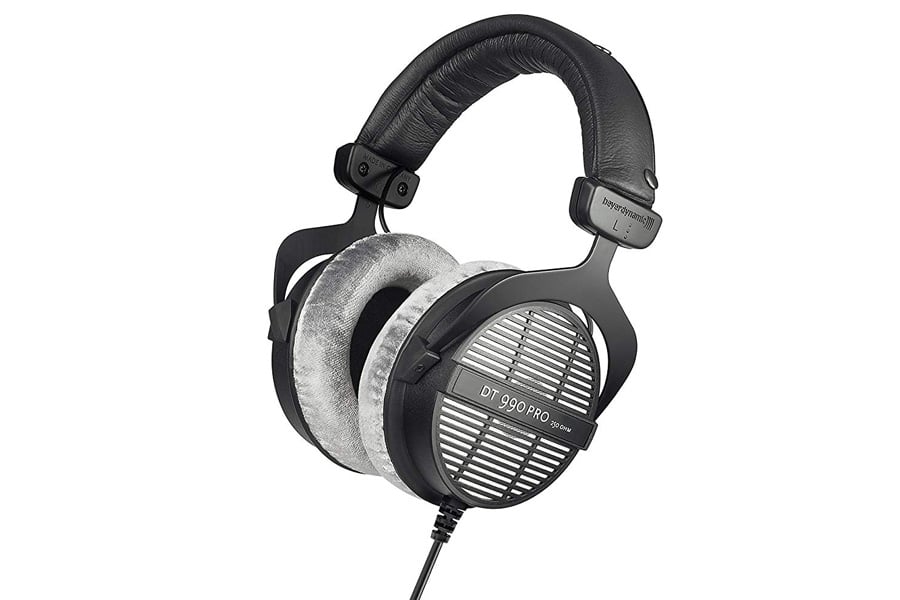 Let’s see, we’ve covered the Ninja Fortnite gaming monitor, the mouse, the mouse pad, and the keyboard. What are we missing in terms of gear? Oh right, a pair of killer headphones. For the utmost tier of audio immersion, Ninja goes with the beyerdynamic DT 990 PRO Over-Ear Studio Headphones. They’re plush, durable, practical, optimal, and ideal for mixing, mastering, and editing. Throw on a pair before the next Marshmello concert. 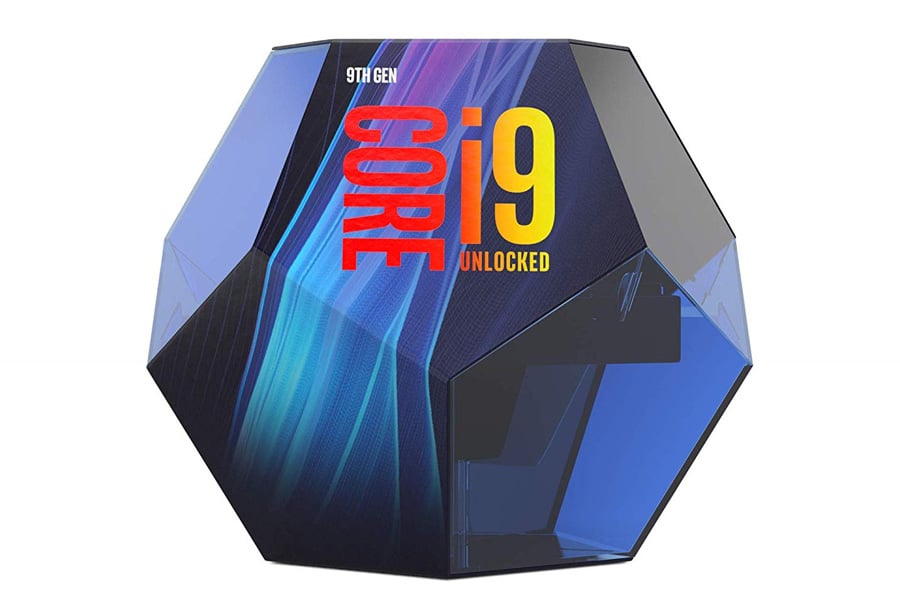 It should come as a surprise to exactly no one that Ninja employs some serious processing power when he gets his game on. Up to the task is the Intel Core i9-9900K Desktop Processor, which delivers 5.0 GHz, 8 cores, and 16 threads. 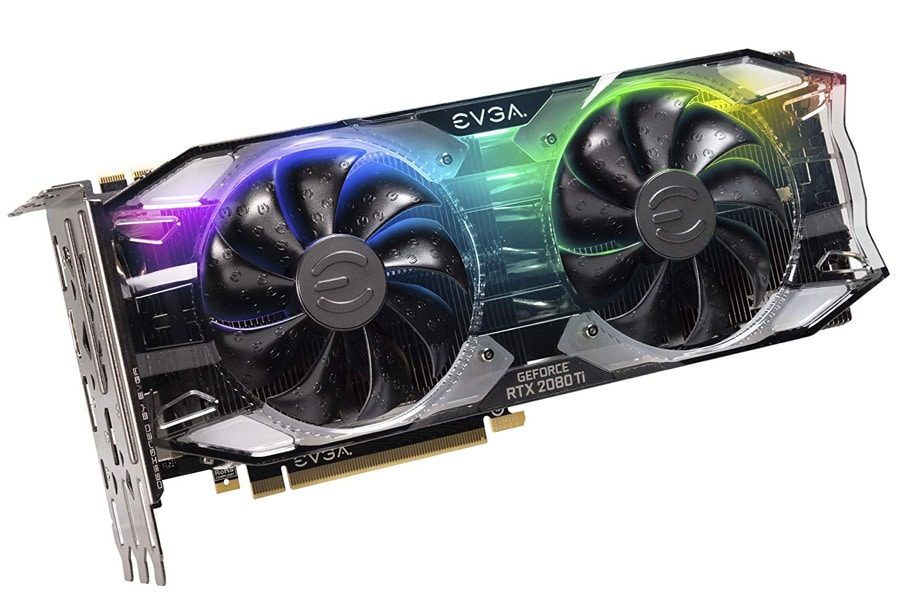 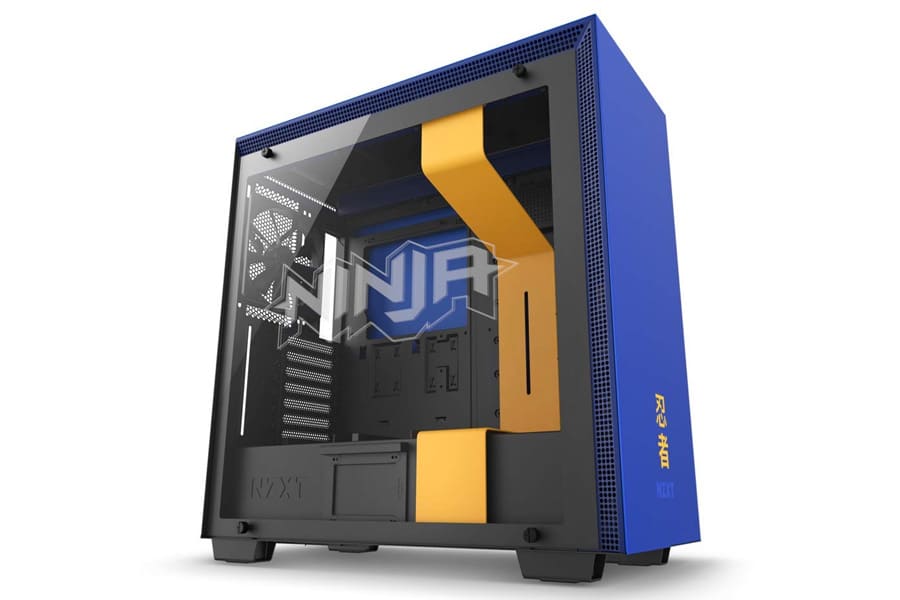 Yes, Ninja is big enough in the gaming world to have a mid-tower PC gaming case named after him. It comes from NZXT and goes by the name of H700i – Licensed Ninja Edition. Equipped with built-in RGB, a CAM-powered fan controller, adaptive noise reduction, and a cable management system, the case simply oozes quality. Look for Ninja’s personal logo, which is radium-etched into the tempered-glass side panel. 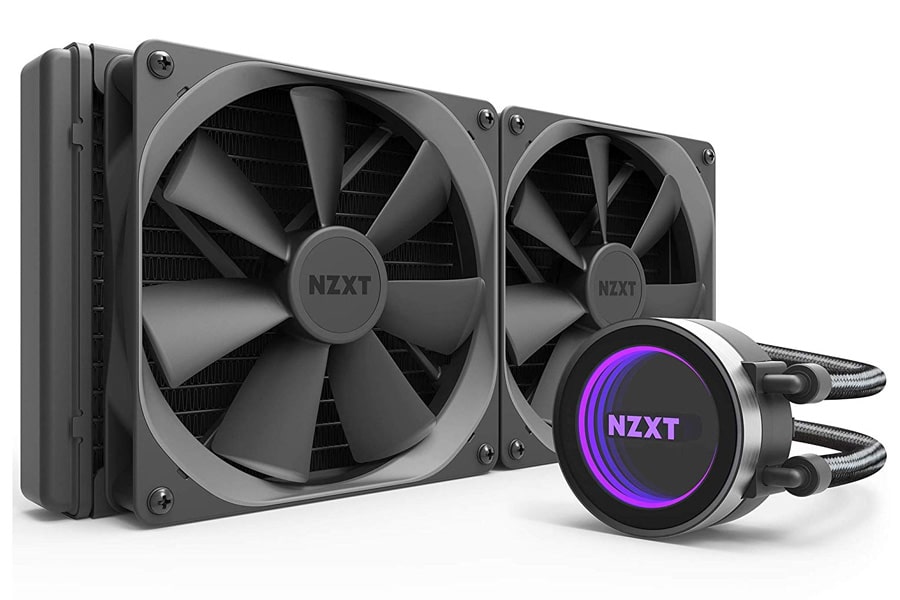 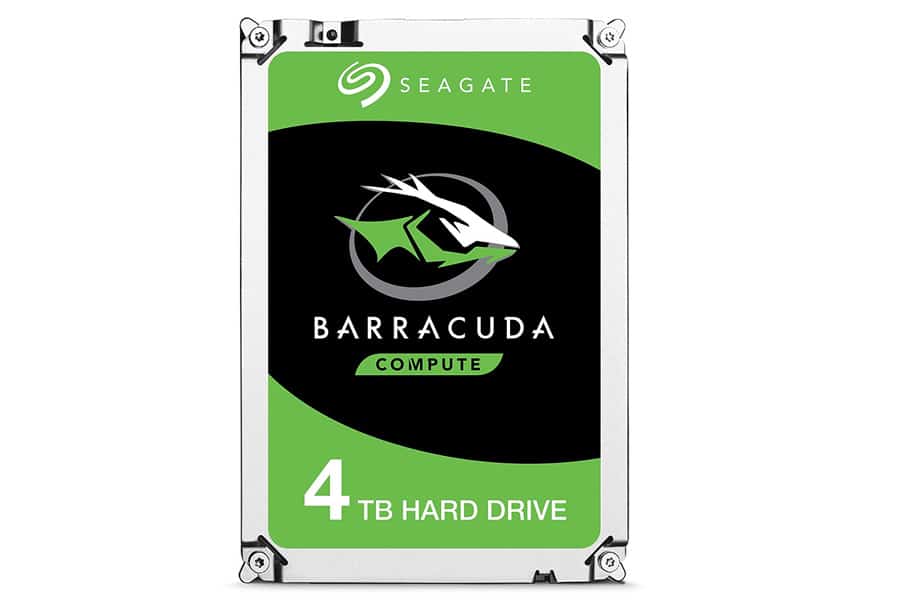 Like any serious gamer, vlogger, or Internet star, Ninja needs as much storage space as possible on his PC. Enter the Seagate Barracuda 4TB Internal Hard Drive, which pairs top-shelf performance with a surprisingly affordable price tag. 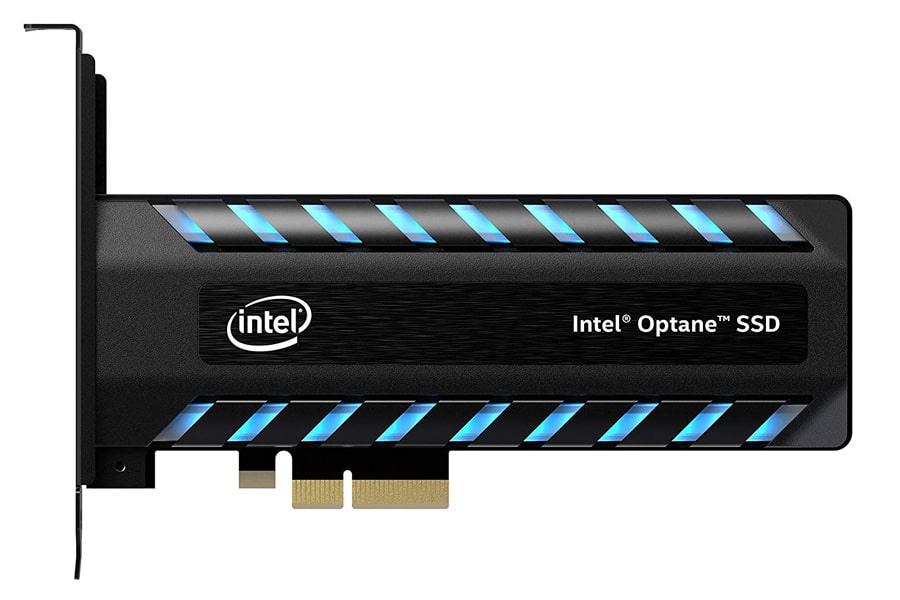 Just when you thought Ninja had enough storage, he whips out a whopper, aka the Intel Optane SSD 905P Series solid state drive. It’s powerful. It’s revolutionary. It’s fast. It’s expensive. And for a gaming legend like Ninja, it’s indispensable. 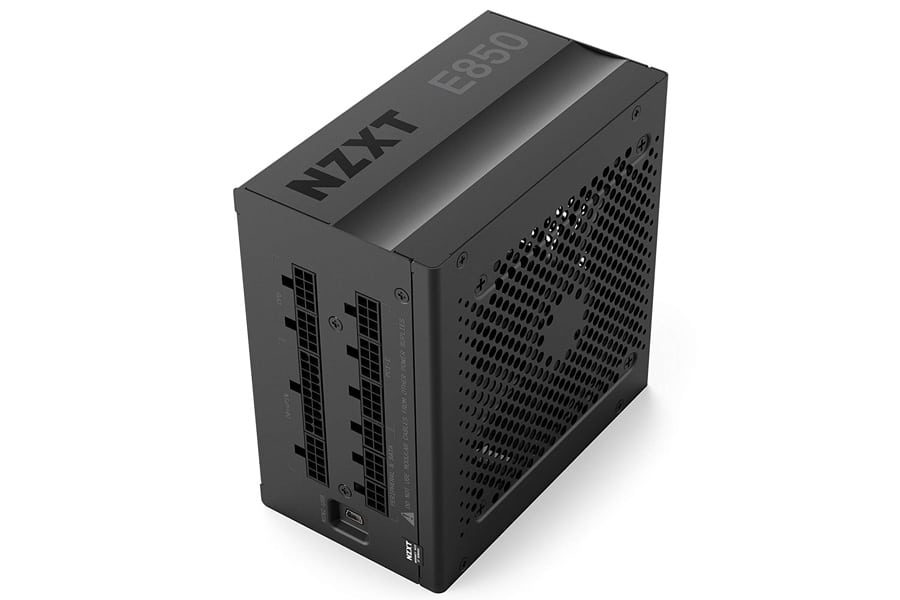 There’s no such thing as too much power for Ninja, which is why he keeps an NZXT 850-Watt ATX Gaming Power Supply on hand. Thanks to a fully modular design, the unit reduces clutter and connects with multiple GPU builds. Meanwhile, CAM software tracks and monitors the power indicators. We can only imagine what Ninja’s electricity bill looks like. 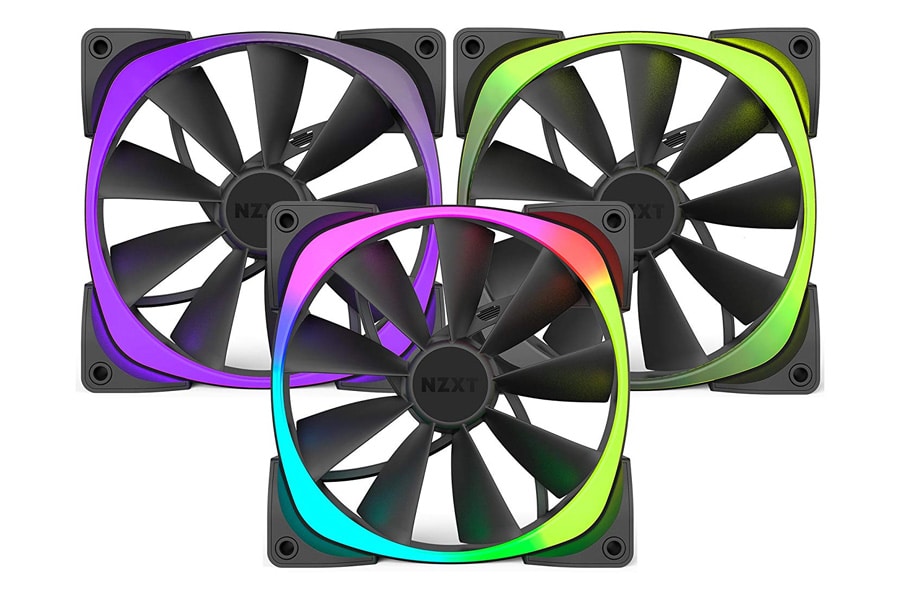 These popular case fans from NZXT blend right in with Ninja’s PC gaming setup, in that they’re modular, colourful, quiet, and CAM-compatible. Link them together to put on a light show. 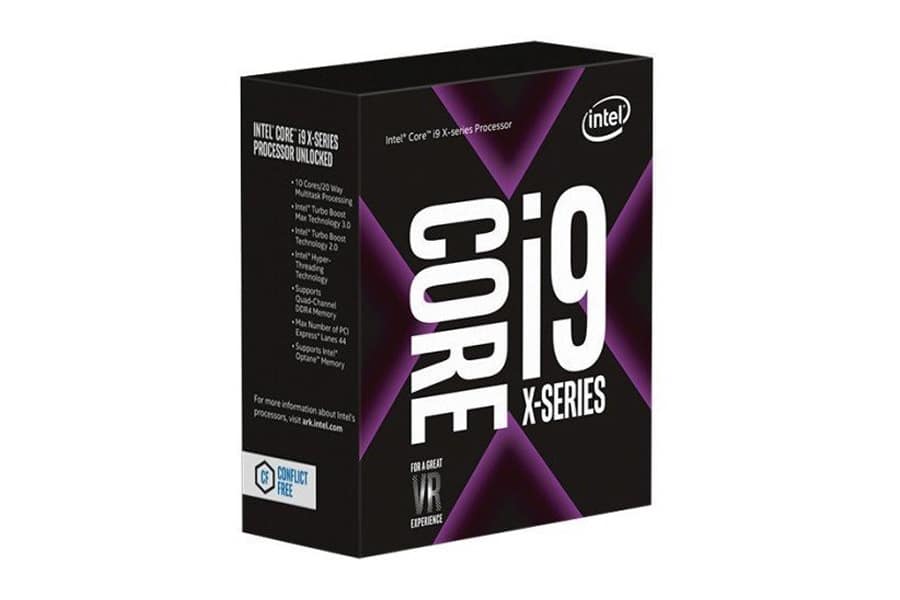 Ninja uses the same graphics card for his streaming PC setup as he does his gaming PC setup. And who can blame him? The EVGA GeForce RTX 2080 Ti XC ULTRA GAMING brings big power at a big price. At the heart of Ninja’s streaming PC is an ASUS TUF X299 Mark 1 LGA2066 DDR4 M.2 USB 3.1 Dual LAN X299 ATX Motherboard. Armed with thermal radar, patent-pending SafeSlots, and protective shielding, the motherboard is tough to its very core.  Not only does it offer complete overclocking control, but as with so many products in Ninja’s arsenal, this one lights up.

When you have a tower PC gaming case named in your honour, you have no reason to shop elsewhere. Hence, the impressive NZXT H700i – Licensed Ninja Edition PC gaming case makes its second appearance. It’s quite literally designed for a gaming Ninja. 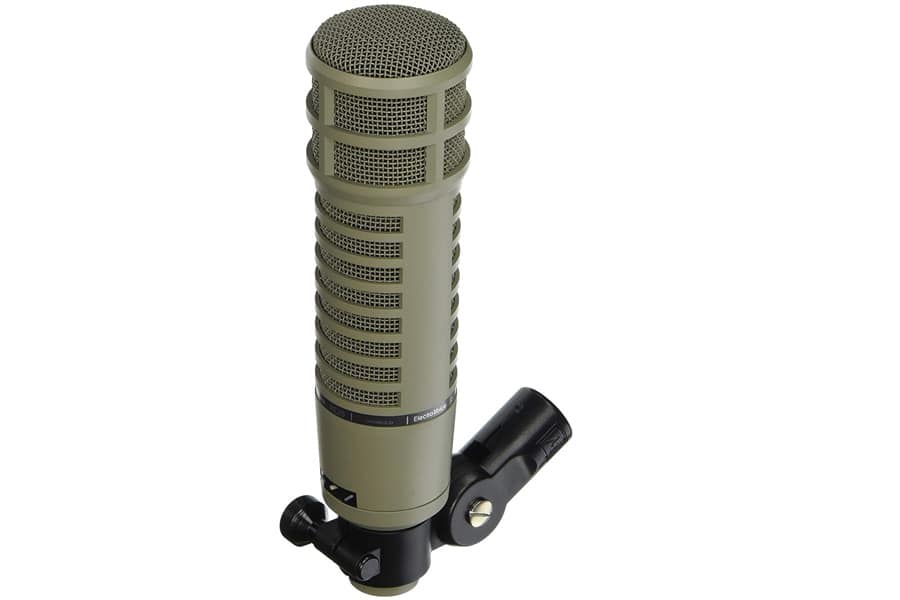 You don’t become the most popular gamer on Twitch without a quality microphone. The Electro Voice RE-20 Cardioid Microphone is therefore an essential part of Ninja’s streaming setup. Made of steel and equipped with both wind filters and a heavy-duty internal pop filter, it keeps the wrong noises out and lets the right ones in. 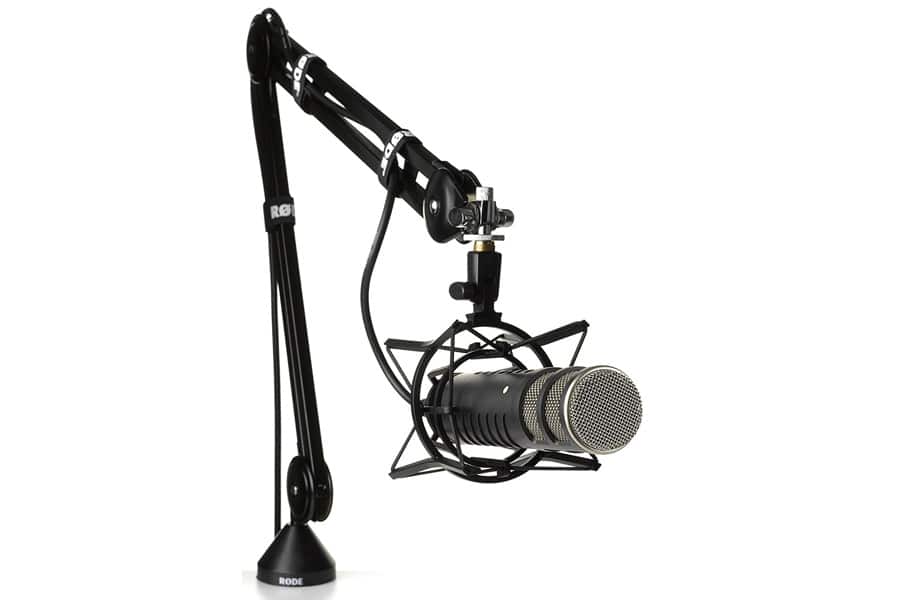 With its 360-degree rotation and long reach, the Rode PSA1 Swivel Mount Studio Microphone Boom Arm is as agile as it is functional. Enough said. 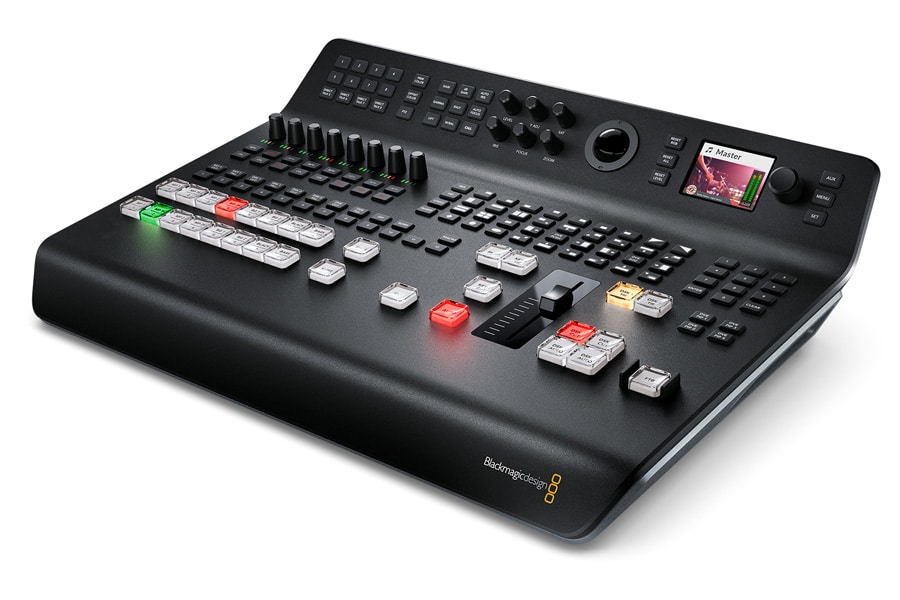 How does streaming wizard Ninja make the video magic happen? With help from the Blackmagic Design ATEM Television Studio Pro 4K, naturally. The compact switcher features 8 independent 12G-SDI inputs and works in all popular HD and Ultra HD formats up to 2160p60. Also included is an upgraded Fairlight audio mixer. 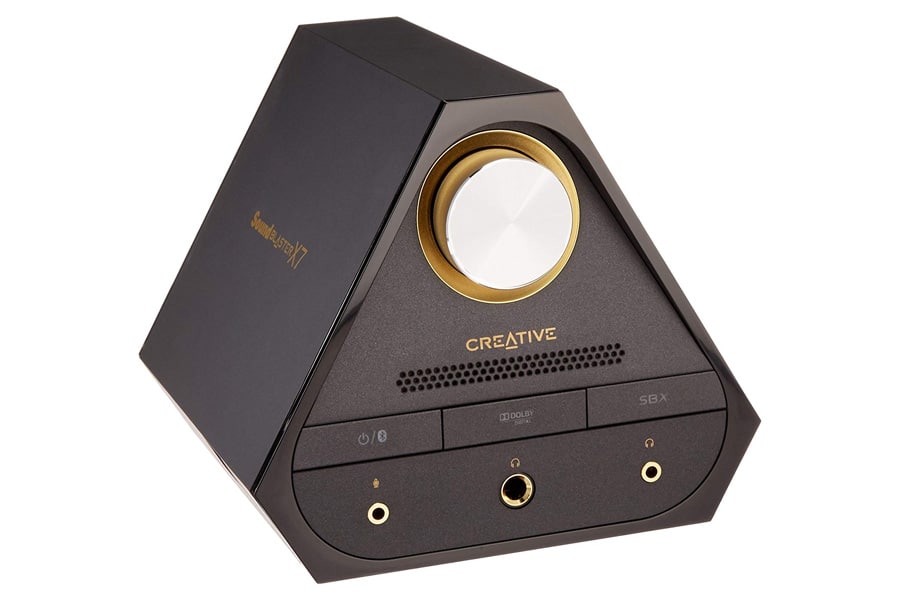 Distinguished by a downright eye-catching design, the Sound Blaster X7 from Creative delivers 24-bit 192kHz High-Res audio, which is another way of saying really, really great sound. Throw in a top-shelf headphone amplifier, a 100W stereo amplifier, advanced voice processing, USB DAC, and low-latency Bluetooth connectivity, and your signals will be coming through loud and clear. 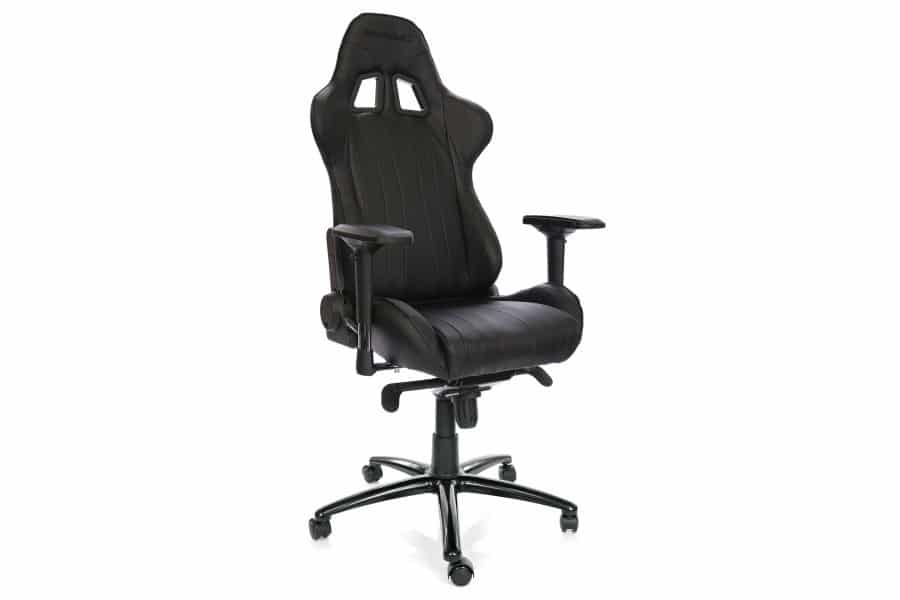 Ninja’s Fortnite gaming chair is yet another product crafted in his honour. Made using premium materials, the ergonomic chair is fully adjustable and thoroughly comfortable. This dude swivels in style, to say the least. 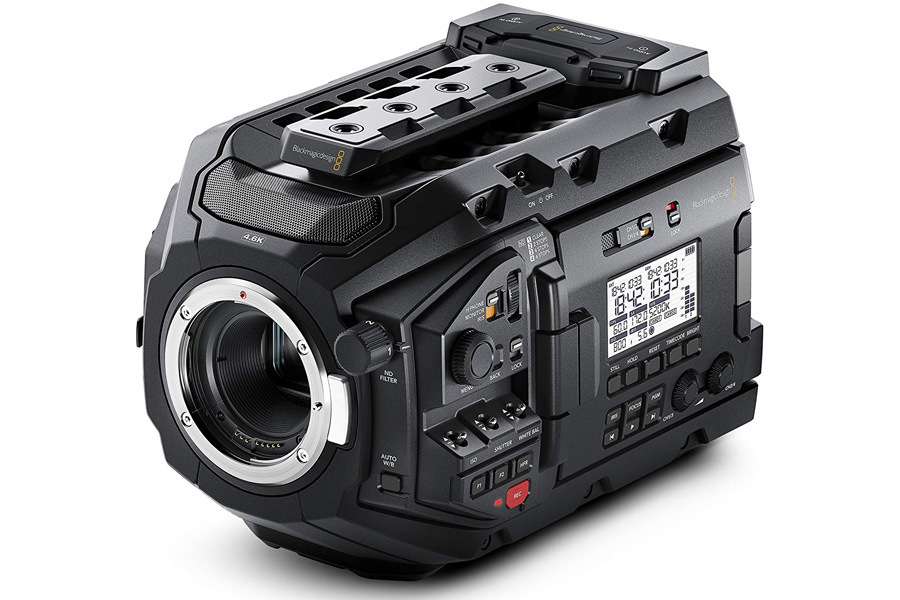 As one might have guessed, Ninja doesn’t cut corners when it comes to his Fortnite gaming camera setup. Capturing all the best angles is the Blackmagic Design URSA Mini Pro 4.6K Camera with EF Mount, which now comes with external camera controls. 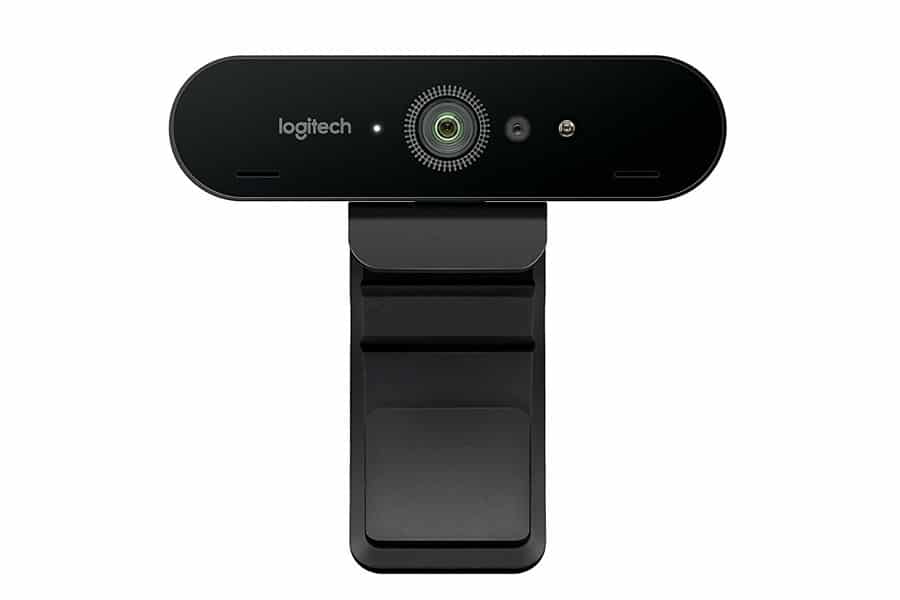 Ninja doesn’t settle for the average webcam and neither should you. Scope the Logitech BRIO instead (i.e. Ninja’s webcam of choice). Not only does the ultra HD webcam deliver 5x zoom along with stunning 4K streaming and recording, but it automatically adjusts exposure and contrast in the face of glare or backlighting. Plus, it looks cool. 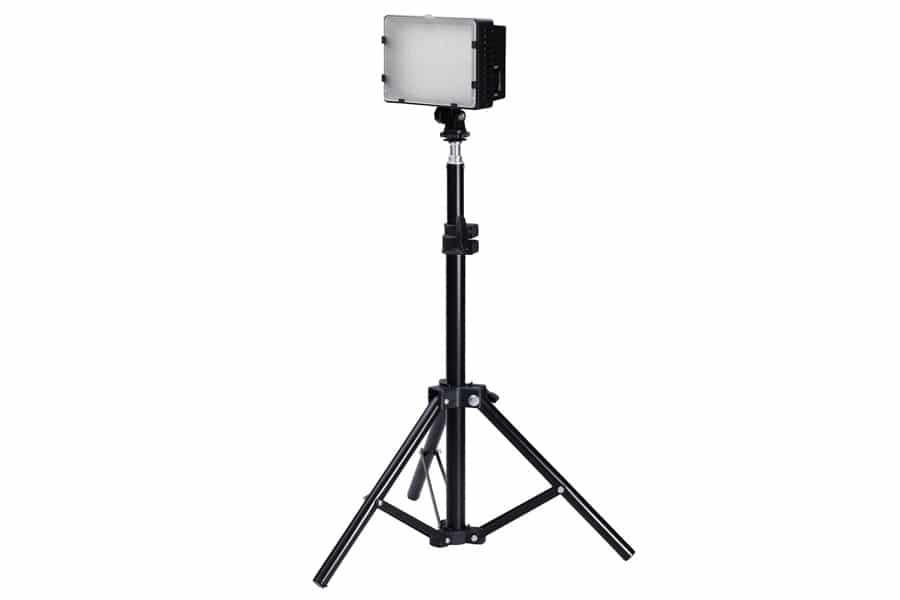 Yes, being a successful Twitch star means setting up a lighting kit in your home or office. For that, Ninja goes with the Neewer Photography 126 LED Studio Lighting Kit. It features a 32″ mini-stand and highly adaptive CN-126 LED light. 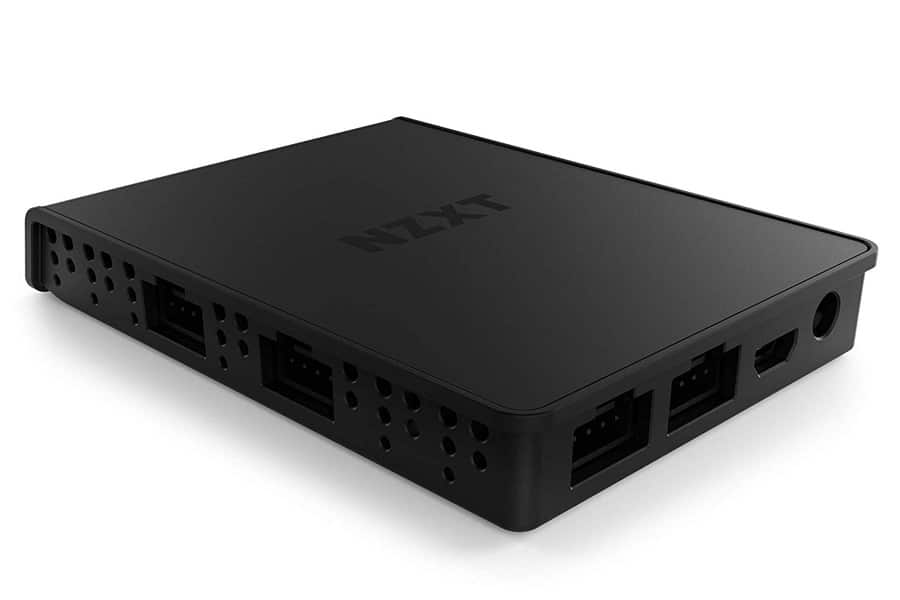 For those who haven’t been paying attention: Ninja really likes bright lights of various colours. Proving as much is the NZXT HUE2 RGB Lighting Kit, which offers quad-channel illumination with support for up to 40 LEDs per channel. 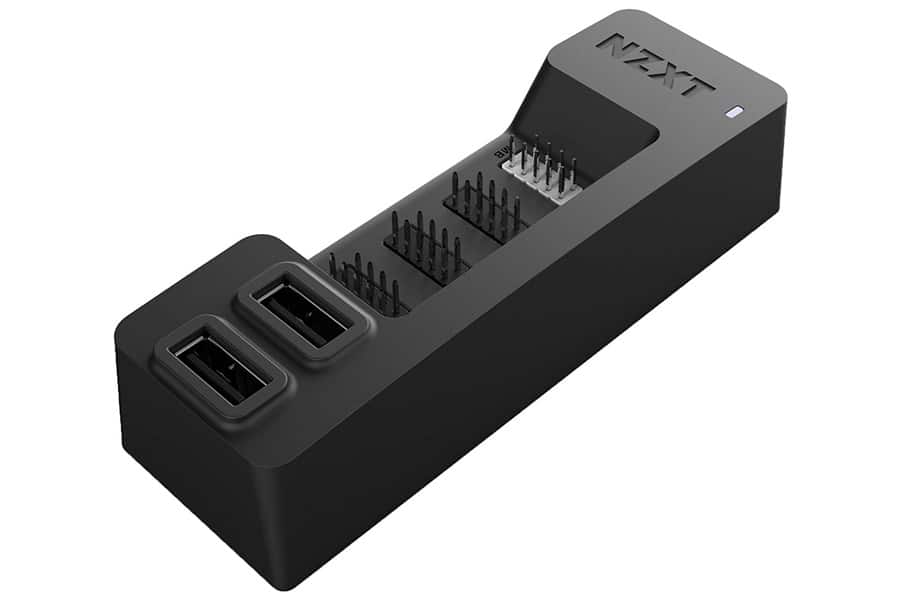 Connectivity is key and so Ninja’s Fortnite streaming setup includes the NZXT Internal USB Hub. Equipped with 5 USB 2.0 ports (3 internal and 2 external connectors), it leaves no device behind.